The Vision Group's 2005 Report recorded misgivings about the retailer:
https://www.visionforsidmouth.org/media/11457/vision_group_report_v4.pdf

There have been concerns about the impact of delivery lorries on traffic:
Disaster zone - Letters - Sidmouth Herald

And the bigger picture of the impact of supermarkets has been addressed:
Supermarkets: What Price Cheap Food? | Communities Before Developers

1. Supermarkets
We have seen recent controversial permissions granted for supermarkets in Ottery St. Mary and Seaton. We are likely to see many more applications in the future. People are entitled to expect reasonably easy access to the services that supermarkets now provide.
We submit that a satisfactory level of access now exists. By chance or design, East Devon has arrived at a level of supermarket provision that is reasonably well balanced, offers variety and competition, and is sensibly distributed throughout the District. There is a strong argument for now saying that further supermarket development will be unnecessary and unwanted. Nationally, we are in a similar position, and there is likely to be increased calls for further supermarket permissions to be curtailed.
East Devon should be ‘ahead of the curve’ and show a clear disinclination within the Plan for further supermarket provision.

A new supermarket every working day

The country's four biggest supermarkets - Tesco, Adsa, Morrisons and Sainsbury's - are granted planning permission at the rate of one store every  working day. BBC's Panorama programme claims 577 applications were approved during the last two years.

However, there is also the view that supermarkets provide greater choice:
Morrisons please - Letters - Sidmouth Herald

Meanwhile, there have been 'supermarket issues' elsewhere in the District, with the District Council itself trying to determine the different options:
www.eastdevon.gov.uk/special_dm_150909_determining_competing_superstore_planning_applications.pdf

As well as looking at the bigger picture, through its Vitality of High Streets and Town Centres report:

The suggestions made in the Portas Report offer ways in which towns can improve their prospects and, for example, town teams may do much to stimulate the attractiveness of town centres. However, the truth is that small town centre shops are facing increasingly difficult prospects. In this district, Tesco has well over 70% of the food market in Exmouth, Otter Nurseries appears to have vastly more shoppers than Ottery St Mary, and the new Tesco in Seaton looks likely to be entirely dominant in Seaton. To a degree Axminster is having success through the attractions of the River Cottage, Sidmouth with its large hotels, its Fields department store also has magnets to attract the shopper and the relatively high income levels of many Budleigh Salterton residents help to support some excellent small shops.

The biggest option of late being what the District Council should do about the Tesco decision to scale back its plans for development at Seaton:

Tesco withdraws offer of affordable housing as part of East Devon seaside development plans | Exeter Express and Echo
The giant and the affordable home | Susie Bond
Seaton: EDDC votes to share the profits with Tesco but no affordable housing on the site | Sidmouth Independent News

These are the plans from Tesco's:

A VISION FOR SEATON

Tesco’s vision for regenerating the town includes a supermarket, Visitor Centre, cycle track, leisure and tourism facilities and new housing. They will serve local people in Seaton and help to attract thousands of new visitors to the area.
The current economic climate means that there is uncertainty as to when other developers will be ready to join us and invest in the site, but they have expressed an interest.


This has been a long and sorry tale:
Tesco invades Seaton &ndash; closing the nursery and holiday village - Home News - UK - The Independent
'This town has been sold to Tesco' | Society | The Guardian

With local campaigning groups set up to question the project of a 'Tescotown' in Seaton:
Tescowatch Seaton
Stand Up For Seaton (SU4S)
The Issues

Bizarrely, however, it seems that property development is more attractive to retailers:


Now supermarkets want you to live over their shops

Supermarket-built schemes may ease housing shortages, but will they actually be good places to live? 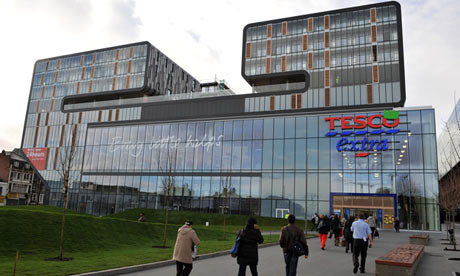 In the last couple of years, the big five seem to have woken up to the idea of developing homes alongside their retail portfolios, says Robert Davis, research director of Glenigan. He estimates that between them Tesco, Sainsbury's, Waitrose, Asda and Morrisons completed just 267 units in 2012, but that this will soar to more than 1,000 this year and double again next year. Some of these projects were first dreamt up nearly a decade ago but the complexity of gaining planning permission and assembling the sites mean that they are only now coming to fruition.

I've received an interesting article about the effect of Tesco on property prices, the link to the article is here.

But one of the paragraphs in it is worth copying in full...

Last week the company announced plans to build 960 homes in the Woolwich area of London, as part of a new £400 million development.
The scheme would include a 100,000 square foot Tesco store. The idea seems to be that the homes themselves would make the supermarket itself commercially viable, especially in predominantly poorer areas of the UK. Clearly, the combination of a Tesco store and lots of lovely new Tesco homes will make both much more valuable to each other.

...now there's a thing, the Liatris plan proposes a 50,000 square foot store and 386 houses. Add the other houses yet to be around the site and, gosh this looks amazingly similar. So regeneration, a la liatris, is by building a whole new self contained suburb, sans overnight tourists. Day tourists get to see marshes and, oh, happy shoppers...just like the ones in their own clone town.

Someone remind me, what is it the people of Seaton get exactly?

.
.
See also: Futures Forum: Can anyone save the High Street?
Futures Forum: Are 'retail parks' a good thing?
.
.
.
Posted by Jeremy Woodward at 04:02