Free lighting for your shed... or home

Alfredo Moser's invention is lighting up the world. In 2002, the Brazilian mechanic had a light-bulb moment and came up with a way of illuminating his house during the day without electricity - using nothing more than plastic bottles filled with water and a tiny bit of bleach.
In the last two years his innovation has spread throughout the world. It is expected to be in one million homes by early next year.
So how does it work? Simple refraction of sunlight, explains Moser, as he fills an empty two-litre plastic bottle.
"Add two capfuls of bleach to protect the water so it doesn't turn green [with algae]. The cleaner the bottle, the better," he adds. Wrapping his face in a cloth he makes a hole in a roof tile with a drill. Then, from the bottom upwards, he pushes the bottle into the newly-made hole. "You fix the bottle in with polyester resin. Even when it rains, the roof never leaks - not one drop. An engineer came and measured the light," he says. "It depends on how strong the sun is but it's more or less 40 to 60 watts," he says.
Carmelinda, Moser's wife of 35 years, says her husband has always been very good at making things around the home, including some fine wooden beds and tables.
But she's not the only one who admires his lamp invention. Illac Angelo Diaz, executive director of the MyShelter Foundation in the Philippines, is another. MyShelter specialises in alternative construction, creating houses using sustainable or recycled materials such as bamboo, tyre and paper. "We had huge amounts of bottle donations," he says. 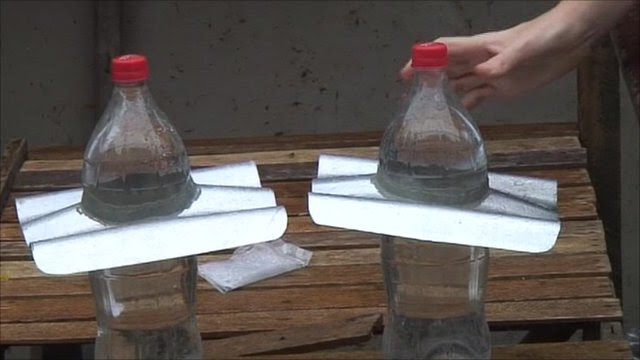 Watch: The lamps are changing lives in the Philippines
"So we filled them with mud and created walls, and filled them with water to make windows. When we were trying to add more, somebody said: 'Hey, somebody has also done that in Brazil. Alfredo Moser is putting them on roofs.'"
Following the Moser method, MyShelter started making the lamps in June 2011. They now train people to create and install the bottles, in order to earn a small income.
In the Philippines, where a quarter of the population lives below the poverty line, and electricity is unusually expensive, the idea has really taken off, with Moser lamps now fitted in 140,000 homes.
The idea has also caught on in about 15 other countries, from India and Bangladesh, to Tanzania, Argentina and Fiji.

How much energy do the lamps save?