The latest newsletter from the national campaigning group SAVE Britain's Heritage features its important work on Knowle:

The Knowle and the Knowle Park, Sidmouth

Since last September SAVE has been helping campaign group,
Save Our Sidmouth and Britain’s oldest civic society, the Sid Vale
Association, fight a harmful application in Sidmouth, Devon, a
remarkably well-preserved Regency town in a beautiful setting on

the Jurassic coast. The application was submitted by East Devon

District Council and was for the demolition of its 19th-century
offices, The Knowle, and development of part of The Knowle
Park, attractive and extensive historic landscaped grounds in the
centre of the town within which The Knowle stands.

In a shocking case of a council seeking to destroy its own
heritage, the application was to build a residential development of
50 new houses and a 60-bed care home in the park. The council
sought to construct new premises on the outskirts of town. Loss of
the Knowle and development of the park on the scale proposed
would represent a devastating blow to the history and character of
Sidmouth. We held that a more appropriate site for the proposed
development could surely be found on the outskirts of the town.

The Knowle is a handsome three-storey building which started its
life as a cottage orné in the Picturesque style and was adapted in
the mid-19th century as a hotel before becoming the council’s
offices in 1969. Although it has undergone alterations, the Knowle
retains much of its late-19th century interior decoration including
fireplaces with delft tiles, decorated timber door frames, an open-
string main staircase, some plaster ceilings, Pugin-style patterned
wallpaper and painted columns. These features give the interior a
grand and imposing feel.

The Knowle is eminently capable of conversion and re-use. The
application stated that the council wishes to move to modern
premises because it believes The Knowle is not fit for purpose
because it is ‘ageing’ and is expensive to run.
Parts of The Knowle Park were designated in 1973 as Public Open
Space. The park is a much-loved local amenity and provides a
visual contrast to the urban landscape.

Neither the Knowle building or the Knowle Park is listed or in a
conservation area. However, we are delighted to report that at a
recent planning committee meeting in February the application
was turned down despite recommendation for approval by the
planning officer. We hope that the council will reconsider its
proposal and if it does decide to submit another scheme that it will
be for the reuse of The Knowle and will not involve any
development of the Knowle Park. 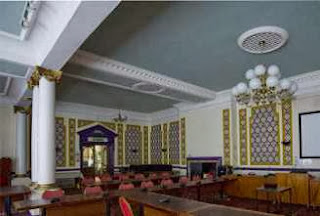 The charming interior of The Knowle