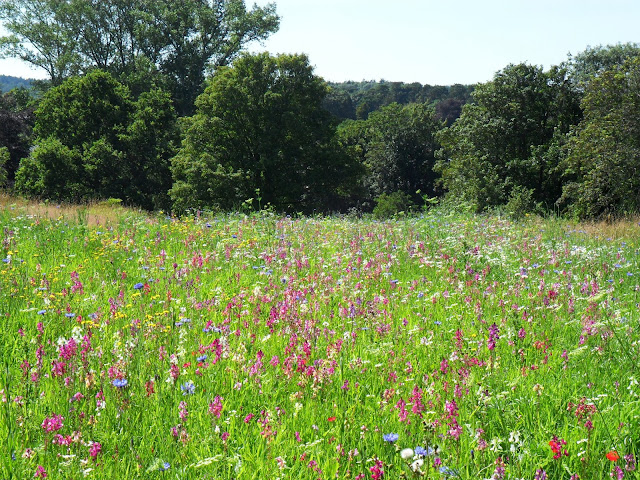 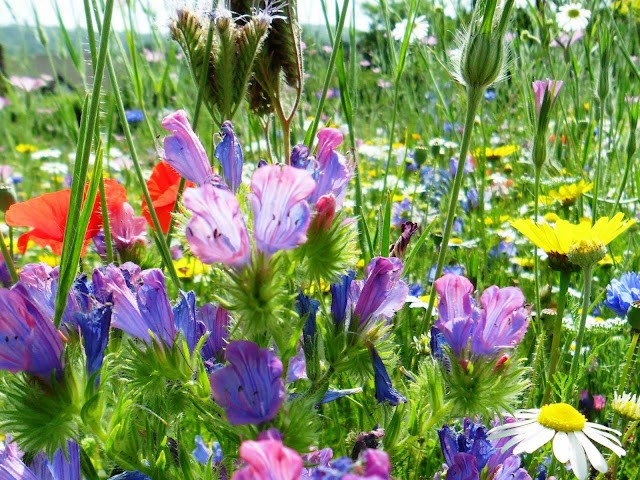 The question is 'what to do next year' at Sid Meadow.

The wild flowers were a great success this year - popular with the public and invertebrate life, with the District Council providing the display. However, there are not the funds for the Friends of the Byes to continue the wild flowers into the future. Nevertheless, the ground will be kept uncultivated next year - to see what will comme up from natural regeneration from those species which will have seeded freely. They will produce a good display for a week or so, but it will not be as spectacular as this summer.

There are different methods to sow a wild flower meadow - as outlined by Monty Don this evening. The seed mix from Nove Flore the last two years is designed to attract and promote beneficial insects. A standard treatment is to use a weed killer to kill any pernicious weeds present - although after a couple of years, this should not be needed, as the seed bank from the old field will have been exhausted). The ground would then be 'subsoiled' to break up the hard pan under the surface and then cultivated to produce a tilth to sow into, using  a special seed drill to sow the seed and firm the surface.

Alternatively, a 'scrape' technique could be used, which is also costly in terms of time and funding, but it removes the top layer of soil where the seed bank for the weeds sit, as well as the nitrogen in  the top layers which feeds them. Wild flowers do not need a nutrient rich soil therefore they will flourish without competition. However, the top soil at Sid Meadow was found to be well over half a metre deep - rather too much for a scrape.

Also, a more specific mix could be sown. Spraying would be needed, to reduce the over-competitive nitrogen feeders (ie, weeds). And it has been suggested that annual, rather than perennial, flower seeds could be sown - again, to build up the bank of 'non-grasses'.

The major issue, though, is that wild flower meadows are difficult to get established and do not always 'take' as quickly as people are lead to believe.