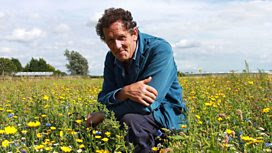 Not currently available on BBC iPlayer
Episode 1 of 10
DURATION: 1 HOUR
Monty Don is on the campaign trail for wild flowers. 98% of wild flower meadows have been lost since the first part of the twentieth century, a shocking statistic which he believes all gardeners can do something about. On his revival he tries his hand at making hay the old fashioned way in a coronation meadow, visits the largest biodiversity hotspot in the world - Kew's Millennium Seed Bank and shows how to grow wild flowers, even without a garden.
Meanwhile, Joe Swift is determined to return the nation's front gardens to their former glory. He bases his campaign at the award-winning Rockcliffe Avenue in Whitley Bay and shares his tips on how to transform front gardens in a few simple steps. He also discovers that greener streets reduce pollution and hits the road to get the message across in his Great British Plant Giveaway.

The Telegraph looked a little deeper:

Bursting with colour: Joe Swift wants our residential streets to be lush and green once again
By Fred Redwood
7:00AM GMT 07 Dec 2013

9 Comments
The urban landscape is changing constantly and objects which were once part of life’s background scenery — from milk floats to shove-halfpenny boards – disappear almost daily. Surely the most regrettable loss, however, is beautifully kept front gardens. Nowadays, too often, these strips of land are being used for car parking. In London alone, 12 square miles — the equivalent of 22 Hyde Parks — have been concreted over in recent years.
It is a trend that has outraged television gardener, Joe Swift, who next week gives over his episode of The Great British Garden Revival series on BBC Two to the subject.
“Instead of being a thing to be proud of – somewhere to show off our gardening prowess – front gardens have become an unloved no-man’s land between the street and the front door,” says Swift. “It’s doing a lot of damage, both to the environment and to local communities.”
This casual vandalism is causing flooding. Concreting over front gardens reduces drainage by up to 50 per cent, clogging the drains with the increased volume of water and causing flash floods. As for the environment, experts agree that plants soak up pollutants from traffic, consequently, eliminating them has a detrimental effect on our air quality. Equally important, a street with concrete hard standing for cars instead of front gardens looks, frankly, ugly. Passers-by respond by using these scruffy yards as bins for fast food wrappings and other discarded junk.
What to do? It’s all very well to hark back to an Agatha Christie version of England, where every garden path was scented with roses but we are a car-dependent nation now. Some 40 per cent of households have two cars. What are we to do with them?
Trailer for 'The Great British Garden Revival'
“It’s possible to park your car in your front garden, without concreting it over,” says Swift. “There are also ways of planting around a parked vehicle.” The key to Swift’s method of giving space in the garden to the car, without creating a mud patch, is an inexpensive carpet of reinforced, hexagonal-shaped plastic mesh you can buy in a DIY store. Dig down a few inches and lay some landscape fabric over the soil, then make a bed of sand before bedding in this grid. Finally, you pat on some topsoil between the mesh and plant it with grass seed. “The best time to plant this is in late summer or autumn,” says Swift. “It will make a lovely lawn you can actually drive over. Alternatively, you could fill the mesh with gravel. It may not be as attractive, but it doesn’t overburden the drainage like concrete.”
The next task is the planting. “Go for things like magnolia, Japanese maples and crab apple trees,” he says. “You won’t have a problem if you plant a sensible distance from the house.” Small front gardens enable Swift to practise what he preaches about planting at eye-level and he has interesting ideas for camouflaging drain pipes. After covering the down pipe with a semicircular trellis, he recommends planting a Clematis armandii in a pot at the base. When the plant has grown sufficiently he ties it to the trellis.
Swift favours tough plants such as honeysuckle and Convolvulus cneorum to cope with the rigours of street life. “Plants have breathing holes on their leaves which soak up pollutants,” he says. “So buy plants with lots of leaves.” His other favourites are jasmine, ivy, roses and climbing hydrangeas. Most gardeners like to ring the changes so he recommends planting bulbs in large pots.
It was found when making the programme that doing up a terrace of front gardens often has an enormously beneficial effect on community spirit. In Swift’s home patch of north London, four years ago, the council had the idea of giving away wild-flower seeds to the residents. This inspired a group to offer free window boxes and bags of earth to fellow neighbours. Now friendships have been formed, creating in the words of one resident, “a wonderful social cohesion”. Estate agents mention this in their sales patter so the scheme has also given a jolt to house prices.
Similarly in Rockcliffe Avenue, Whitley Bay, six years ago a band of neighbours decided to plant a few pots to cheer up the area. The scheme grew and in 2010 the avenue won the prize for The Best Street in Tyneside.
“Really this is all about bringing people together,” says Swift. “But there is also a serious point to be made: if we don’t do something about this problem now we’re going to lose more of our Great British front gardens. That would be a tragedy.”
The 10-part series 'The Great British Garden Revival’ is on BBC Two from Monday December 9 at 7pm