Back in February, hundreds of us marched to Westminster in support of marine protection. The government had told us it was only considering 31 of the proposed 127 Marine Conservation Zones around our coast.
That is not enough to create the ‘coherent network’ of protection that they had been promising us. It is not enough to ensure our seas recover, and remain healthy and productive, for generations to come. Tens of thousands of you wrote in to the government consultation telling them how you felt.
Eight months on, the government has finally told us what they are doing. It's very good news that 27 sites of these sites are immediately becoming Marine Conservation Zones, and we hope that the protection put in place will be meaningful and properly enforced, so that these sites do their job protecting marine life, rejuvenating our seas, and providing havens for the more sustainable fishing methods.
The message of our Westminster march was that we didn't want to see all the other proposed MCZs brushed under the carpet. 27 is still 100 less that the number of sites that scientists said would make a proper network. It's taken a long time, but today the government has committed to look again at these sites over the next 4 years with the aim of designating more of them.
We'll be watching the new minister George Eustice closely that he keeps to this timeframe, and that the government fulfils its commitment to a network of marine protection that we can all feel proud of.
All those of you who marched, emailed, or have shown your support for healthy, protected and propductive seas should feel proud that you have helped to keep this on the government’s agenda. But there’s plenty more to do, so please, keep Fish Fighting!

And from the Guardian: 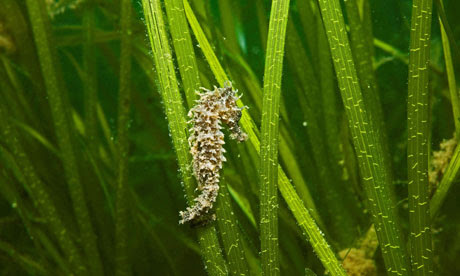 A small spiny seahorse (Hippocampus guttulatus) in a seagrass bed (Zostera marina) are among the species that will better protected with the creation of 27 new marine conservation zones. Photograph: Lin Baldock/Natural England/PA

Twenty-seven new marine conservation zones (MCZs) will be created in English seas on Thursday to protect seahorses, coral reefs, oyster beds and other marine life.
But the number is four less than ministers proposed and just one-fifth of the 127 zones recommended by the government's own consultation.
The seas around England are some of richest marine environments in the world, with dense forests of seaweed, many fish and crustacean species and schools of dolphins, but dredging and bottom-trawling for fish, prawns and aggregates have devastated large areas.
"We very much see the new MCZs as the beginning and not an end," said environment minister George Eustice, who said consultation on two more tranches of MCZs would start in 2015. He added: "It is important to remember that MCZs are only one part of the jigsaw. Over 500 marine protected areas already exist around the UK."
The 27 zones cover 9,700 kilometres squared (km2) from the Aln estuary in the north-east to Beachy Head and Chesil Beach in the south and Padstow Bay and the Scilly Isles in the south-west. Together with the 30,000km2 already protected, 9% of all UK waters and one-quarter of inshore waters now have some form of protection – though critics have called the existing protected areas "paper parks" that do not stop the most damaging practices.
Professor Callum Roberts, a marine expert at the University of York who led 86 marine scientists in condemning the government in April for reneging on the 127 MCZs recommended by an earlier £8m consultation, said: "The 27 is far, far away from where we need to be."
Ministers have argued that the economic cost to fishing and ports of some proposed zones would be too great, but Roberts was blunt: "It's bollocks. These MCZs will not put fishermen out of jobs: they will protect them in the long run." Roberts said the possibility of more MCZs in future provided an opportunity: "If science is put at the helm it will be worth waiting for."
Joan Edwards, the Wildlife Trusts' head of living seas, welcomed the news: "Marine protection is an issue which matters to anyone who has ever spent happy afternoons exploring rock pools or been enchanted by chance encounters with dolphins, whales or one of the many other captivating species we enjoy in our waters." But she said the completion of an "ecologically coherent network of marine-protected areas was desperately needed", particularly to ensure species with large ranges like basking sharks and sea birds were protected.
Dr Jean-Luc Solandt, biodiversity policy officer at the Marine Conservation Society, said the current way of creating MCZs was too complex and costly, as each part of each zone had to be assessed. "Protecting whole zones is much more simple and visionary as it allows larger areas of seabed to actually recover. That is what our sites need – actual recovery."
Barry Gardiner, Labour's environment minister, said: "Once again we see this government's failure to implement proper science. The scientific purpose was to create an ecologically coherent and resilient network of 127 sites and 65 reference areas that would safeguard and enhance the biodiversity of our marine heritage. The government is not only 100 sites light but predictably it has failed to specify how the inshore fisheries conservation authorities are going to be resourced to monitor, manage and enforce this new statutory obligation."
On Monday, 41 UK conservation groups issued a report stating that just four of the 25 nature and wildlife commitments made by the government were progressing well. It said the ministers were failing on the pledge to better protect the marine environment.
England names 27 new marine conservation zones | Environment | The Guardian

In other words, Lyme Bay is not on the list, much to the disappointment of some:

All rights reserved. Credit: Greenpeace
The government has at long last made an announcement on the first wave of marine conservation zones (MCZs) in UK waters. This is long overdue, but frankly fails to deliver. Today’s announcement to designate only 27 sites is a whopping 100 sites short of what thegovernment’s own consultation said was necessary. So what’s going on?
If I was a cynic (it just so happens I am) I might say that this government just doesn’t care enough about this. The seas are consistently at the bottom of the to-do list, and all governing politicians are shoddily short-termist when it comes to nature. The commitments and change we need simply don’t happen in the lifetime of any one government, so, since no rewards are likely to be forthcoming, easier to delay and leave it for the next person.
That’s where we are with marine protection. This government inherited a Marine Act – an act that could, given political will, deliver for our oceans, and the life and livelihoods that depend on them.
But where is that political will? It’s easy to snipe at lack of progress from opposition. It’s easy to bemoan lack of funds and other priorities when in government. It’s clear that the status quo is what works best for the civil servants & officials, as it’s all a bit tricky you see. And if we do X then we simply threaten that Y or Z might not happen…
In reality governments and officials are keen to tick boxes with as little effort as possible. If they can spin that out in a press release to say ‘now we have protected A GAZILLION PERCENT of England’s seas, and we can GUARANTEE it will make the dolphins smile’, then all the better. As long as people don’t ask questions that are too tricksy – like ‘What are you protecting these new sites from?’ ‘What is now not allowed?’ And ‘How exactly are you enforcing that?’ The political response, once you get past the spin or soundbite, is to shuffle uncomfortably and look at their shoes.
Whilst I am a bit of a fish-hugger, I will admit that the one thing that really annoys me about the progress and process on marine conservation has been allowed to be so polarised. In reality marine conservation and sustainable fishing must go hand in hand. We can as a country decide what we value and how we protect it. That’s as true of pods of dolphins, coral gardens, seagrass beds as it is of coastal fishing communities and sustainably-caught local seafood. That’s why Greenpeace campaigns across Europe (and elsewhere) for both.
There is some hope out there, with lots of effort and goodwill, projects like COAST up in Arran and the Lyme Bay partnership in Devon are beacons in a sea of spin and distraction. We see other areas where marine life is being increasingly viewed as a tourist attraction, prompting new ways to value it and want to protect it. Yet others where low-impact fishing methods are providing high quality and sought-after products, giving the fishers reason to think about how they protect the environment their livelihoods depend on.

But we need much more, and that need has to come from government, or it will simply be too late for some species, habitats, and coastal communities. The longer we leave it, the more we will have already lost.
That means we need to start being honest and vocal about what we value and what we expect from those in power. And it means those in power need to start understanding that nature and the public (whether they want to eat a fish or hug a fish) are legitimate stakeholders in our seas' future too.
UK government progress on marine conservation isn’t making many waves | Greenpeace UK