‘Become a councillor’ roadshows in East Devon .................. but not in Seaton or Sidmouth, because the last roadshows there "attracted very little interest"

Nevertheless, the Returning Officer will be running several 'roadshows' in the District giving guidance on 'how to become a councillor':

Returning Officer will encourage people to consider standing for election

Men and women from all walks of life become councillors

With local elections in East Devon taking place on 7 May (coinciding with the date for the General Election), Returning Officer Mark Williams will shortly be embarking on a mini tour of the district to explain the procedures for standing as candidates for towns, parishes or the district council.

The events will be in Axminster, Cranbrook, Exmouth and Honiton.

The roadshows are a repeat of an initiative Mark has undertaken every four years in the run-up to local elections to make people aware that they could play an active part in local democracy either representing their town or parish or one of the 32 wards on East Devon District Council.

The aim is to inform people about the need for new councillors to come forward, the process that is followed and the timetable for nominations. He said:

"If you care about the area that you live or work in and the issues facing local people, you could be a councillor.

"Perhaps you enjoy reading the local newspaper and often have a strong opinion on the issues you read about. You may enjoy talking to friends and colleagues about what’s going on in the area. You may feel that certain sections of the community or people who live in a particular neighbourhood are getting a raw deal and need stronger representation.

"Research tells us that people are most concerned about issues such as crime, schools, transport and the environment. Your local council can make a difference on all these issues and many more, and so can you as a local councillor."
Make a difference

According to the Electoral Commission, there are many reasons why people decide to become a local councillor. These include:

• Wanting to pursue their political beliefs

• Wanting to contribute their business or professional skills

• Concerns about one particular issue

• As an extension of what they are already doing through a political party, trade union, charity, voluntary group or school governing body – becoming a councillor can be the next step.

The Electoral Commission says that groups made up of diverse individuals tend to make better informed decisions. It’s important that councils have councillors who not only reflect and represent the communities they serve, but also have a broad range of skills and life experience.

You don’t have to be highly educated or have a profession. Skills gained through raising a family, caring for a sick or disabled relative, volunteering or being active in faith or community groups can be just as valuable.
Support and training

Don’t worry if you don’t feel that you currently have the skills or confidence to be a councillor. All councils provide support, information and training for new councillors.

The sessions where Mark Williams will be talking about the role of local councillors take place on the following dates and at these venues:

With the General Election taking place this year on the same date, it’s also vital that as many people as possible use their right to vote by ensuring their name is on the Electoral Register.

The Electoral Commission is running a national campaign to encourage people to sign up through the new Individual Elector Registration (IER) system, with the message: ‘Your vote matters; make sure you’re in’.

The Herald also covered the story
- which infers that people in Seaton and Sidmouth are not 'interested': 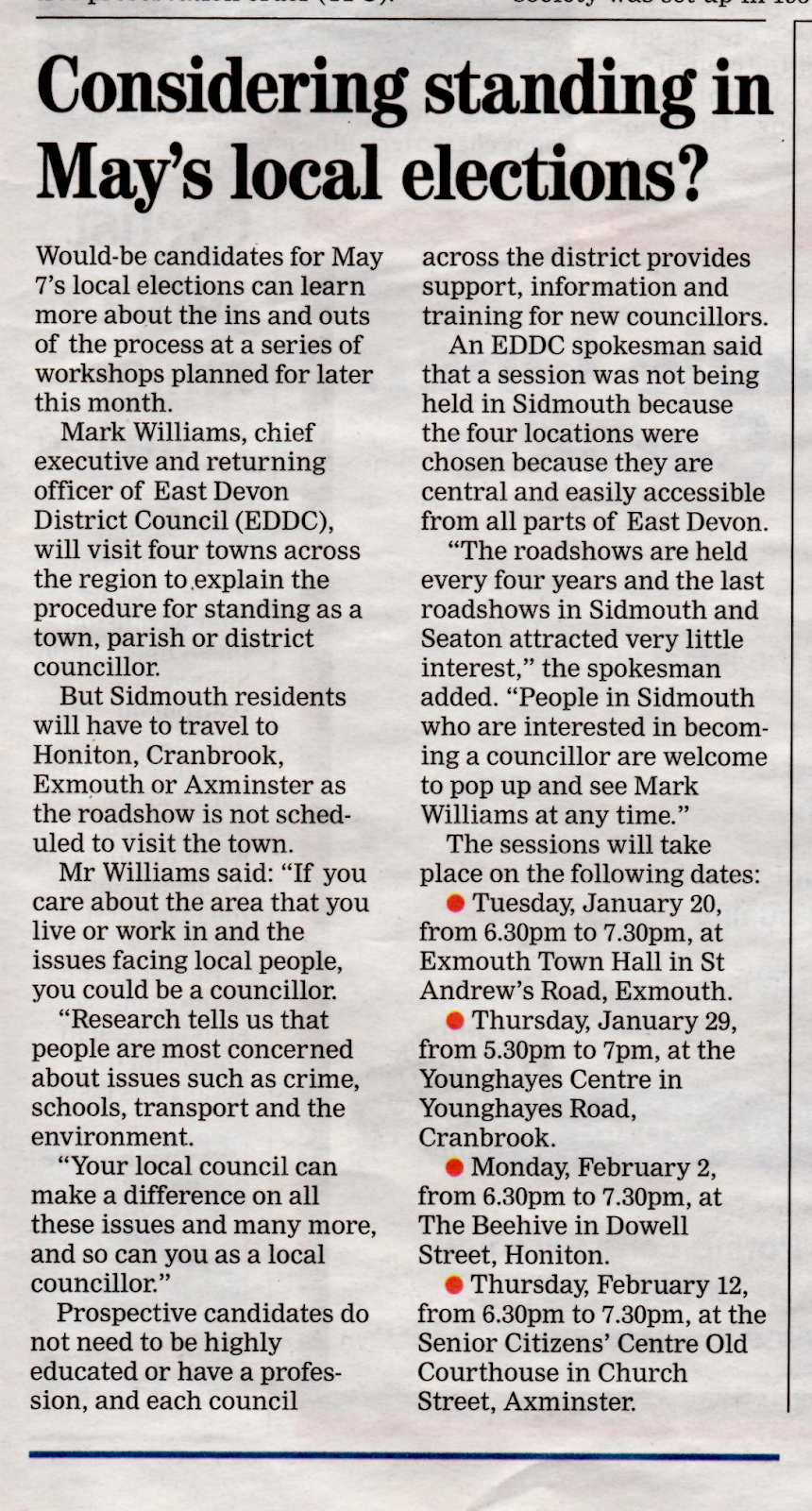 As has the Express & Echo:
Budding local politicians invited to learn what it takes to be a councillor in East Devon | Exeter Express and Echo

And here is a report - plus comment - from the East Devon Watch blog:

“BUDDING local politicians can find out more about what it takes to be a councillor in a series of roadshows being hosted by East Devon District Council.

The mini tour events will be hosted by the local authority’s returning officer Mark Williams, who is also its chief executive who will explain the procedure.

Beggars belief! The man who “lost” 6,000 potential voters, was instrumental in quashing investigation into the East Devon Business Forum and emasculated the Overview and Scrutiny Committee!

Leaving aside any specific issues with Mark Williams, I fail to understand why a Returning Officer would be a suitable person to explain what it takes to be a councillor.

Surely other councillors would be far better placed to explain what it is like to be a Councillor because they have experience of being one, whereas a Returning Officer can only speak from experience as to how local elections are run.

EDDC Chief Exec Mark Williams will teach you to be a councillor | East Devon Watch
.
.
.
Posted by Jeremy Woodward at 15:26