The District Council has made it clear that a main reason to move from Knowle is the conviction that there will be a 10% increase in energy bills in the foreseeable future:
Futures Forum: Knowle relocation project: Predicting energy price increases over the next 20 years

And this is all within the context of the collapse in oil prices:
Futures Forum: Climate change: and lower oil prices.

This is not necessarily a 'good thing':
Futures Forum: Squaring the circle: low oil prices, high renewable prices ... and high carbon emissions
Futures Forum: Climate change: 'stranded assets' and 'unburnable oil' ...... or the pressures to leave oil and gas in the ground

And low oil prices are not necessarily a 'good thing' for the District Council - not simply because it questions the veracity and validity of its relocation figures - but because this might distract from dealing with the longer-term issues around energy prices.

If the District Council is nevertheless convinced that it faces annual energy bill increases of 10%, then what should it do about it?

One 'solution' with regard to rising energy bills at its Knowle headquarters would be to move to a 'more efficient' building or two:
Futures Forum: Knowle relocation project: "If Knowle is not fit for purpose, do they really think that Exmouth Town Hall is?"
Futures Forum: Knowle relocation project: comparing the Sidmouth and Honiton/Exmouth options

Another would be to install solar panels - or PV panels. For example:
Futures Forum: Solar photovoltaic system at Escot ... and at Knowle?

Such technologies can be expensive, however.

This is a recent advert from a solar panel company:

Solar Photovoltaic (PV) panels are seen as one of the solutions to our current energy crisis. Solar PV systems create renewable, green energy and as a result we are continually encouraged by environmentalists and governments alike to use the technology. However, in today's economic climate it remains to be seen whether this is a viable option for businesses, in particular local authorities who are constantly facing drastic cuts to their budgets.

Why use solar panels?

Solar panels are expensive to install but will substantially reduce utility bills and as local authority buildings are extremely expensive to power solar panels would save potentially save them thousands a year. In 2010 a Hampshire council installed solar panels on its various buildings including town halls, civic centres and leisure centres and claimed to save Â£11,000 a year in electricity bills. This would result in significant budget savings, vital at a time when local authorities are faced with tough cuts. The use of renewable energy will also generate a certain amount of positive publicity for a local authority and may even result in additional funding as it would help meet government environmentalist targets.

The incentive for local authorities to install solar PV systems increases when we include the financial reward offered under the Feed-In Tariff scheme. Under this scheme the government pays solar panel owners 41.3 pence per unit of electricity produced even if it is used within the building. Any excess electricity is returned to the national grid but is further rewarded with bonus 3.1 pence per unit. It is estimated a local authority could receive in excess of £20,000 a year under this system. Indeed, the Hampshire council who installed such a system claim they will receive £25,000 a year and be able to pay for the installation costs of all their solar PV systems in 10 years.

Are there any Disadvantages?

Nevertheless, there are ways to finance the initial outlay.

This is a funding project announced last year to help such projects get off the ground:

A new partnership has promised to build a pipeline of solar PV projects worth £60 million across local government sites in the UK.
The partnership between British Gas’s solar division, Generation Community and Social Finance aims to equip sites such as schools and town halls with solar arrays to help cut buildings’ utility costs through a ‘Solar Social Bond’.
The group estimates that it could potentially install solar PV on 8,000 rooftops – saving the average property 40% on its electricity bill. The group has promised that revenue generated from the feed-in tariff would be returned to the community by supporting local social enterprises and educational services which target fuel poverty.
“This is an exciting chance to deliver renewable energy both professionally and to a commercial standard, whilst keeping community ownership and values at the core of the project. We hope that local authorities and housing associations come forward to take advantage of this new partnership,” said James Mansfield, director of Gen Community.
Social Finance will raise the capital required for the PV pipeline, with Gen Community charged with overseeing the projects; British Gas Solar will install and operate the arrays.

... with forward-looking Bristol already having invested some time ago:
Council use of renewable energy | Bristol City Council

The point is, however, that whilst we might well be enjoying low energy prices today, this bonanza will not last - as several oil producing states are recognising:

Dubai’s government-owned utility plans to double the size of a solar power project that it expects will produce some of the world’s cheapest electricity.
Dubai Electricity & Water Authority awarded a contract to build the 200-megawatt plant to a group led by Saudi Arabia’s ACWA Power International. The 1.2 billion dirham ($330 million) generating station will be completed in April 2017, DEWA Chief Executive Officer Saeed Mohammed Al Tayer said yesterday at a news conference in the Persian Gulf emirate.
ACWA will sell electricity from the plant to DEWA at 5.85 cents per kilowatt-hour, a price that will be “the lowest by far” for solar power globally and among the cheapest from other sources, Paddy Padmanathan, the Riyadh-based company’s CEO, said in an interview.
Dubai plans to build 1,000 megawatts of solar capacity by 2030, enough to meet 5 percent of its forecast electricity needs that year, as it seeks to reduce reliance on natural gas as its main source of energy for local use. Saudi Arabia and Abu Dhabi, the U.A.E.’s capital and largest emirate, are also developing renewable energy as oil producers in the Gulf try to reduce the burning of costlier fossil fuels to produce power.
Dubai Doubling Size of Power Plant to Make Cheapest Solar Energy - Bloomberg

And, as pointed out in today's Independent, we need to look forward a little:

Eat shale, Iran! Frack off, Putin! It’s the era of cheap oil, but will it last?


Eat shale, Iran! Frack off, Putin! It’s the era of cheap oil, but will it last? - Comment - Voices - The Independent

So, what is the East Devon District Council doing in terms of long-term planning for sustainable energy sources?

There are policies aplenty - from District and County Councils:
The Conservation of Devon’s Environment and Resources - DEVON STRUCTURE PLAN 2001

This is from the draft Local Plan: 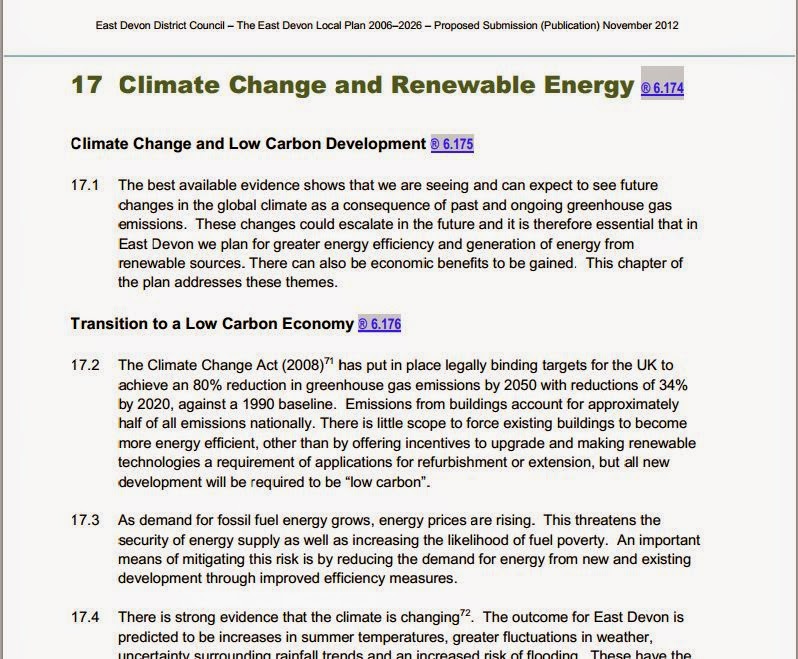 And yet the planning is very short on specific commitments:

It is clear, however, that local authorities have a responsibility and a leadership role - as well as opportunities ahead:
Futures Forum: "Local governments are the key actors in the fight against climate change"
Futures Forum: Local authority and community energy projects are going to pose “a big challenge" to the Big Six providers
Futures Forum: Local energy can be very profitable: "Seizing the opportunity of decentralised energy generation can provide new income streams for communities and councils."

To return to Knowle.

Several years ago, the Energy Assessor made several concrete recommendations - very few of which have been considered:
Futures Forum: Knowle relocation project: "How efficiently is this building being used?"