Knowle relocation project: "the whole situation is Kafkaesque" >>> "misleading figures, loaded and biased consultations and the heavy handed (and expensive) use of lawyers to force a decision through..." 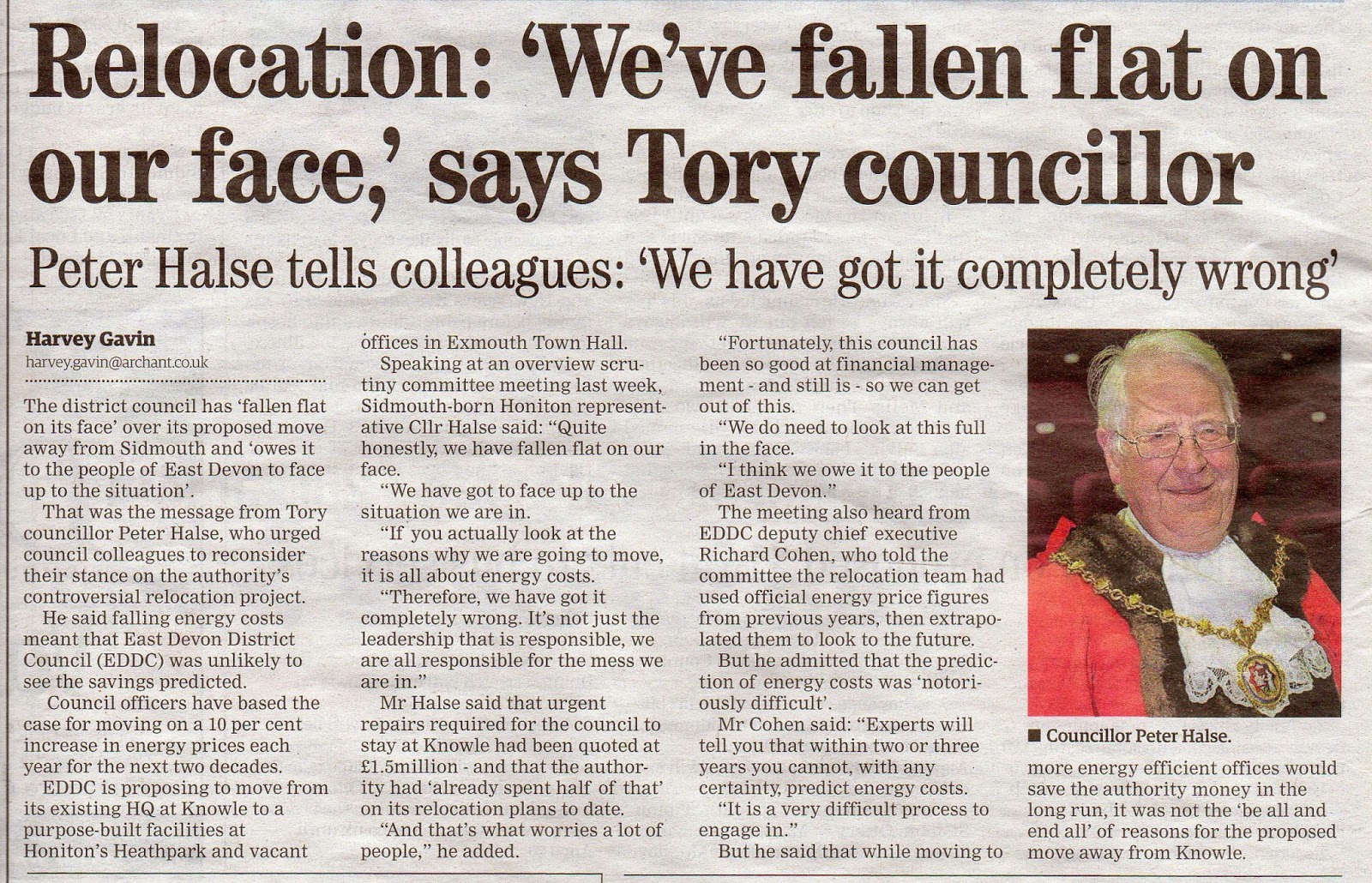 This chimes with the views reflected in the report from the East Devon Watch blog - together with the usual, pertinent comment:

“QUITE HONESTLY, WE HAVE FALLEN FLAT ON OUR FACE” WITH THE RELOCATION PROJECT, WARNS HONITON COUNCILLOR, PETER HALSE

At last night’s Overview and Scrutiny Committee senior Tory councillor Peter Halse lashed EDDC’s Relocation Project. He said it risked the Council’s reputation for financial prudence. “At the time (the relocation project) looked OK, but now, with hindsight, it looks pretty bad….Quite honestly we have fallen flat on our face!” He was sceptical about Deputy CEO Richard Cohen’s claimed energy savings, and said employees based in the newer 1970/1980s building, “can’t see any reason why they’d want to move”. He concluded “It’s not just the leadership who are responsible. We need to look this thing full in the face. We can get out of this”.

Sidmouth resident Richard Eley, had already mauled Richard Cohen’s assumptions on future energy cost savings which were “way out of line” with those predicted by the Department of Energy and Climate Change (DECC). Mr Cohen in response welcomed the fact that auditors would now be taking “a useful look under the bonnet, as it were”. In the meantime a preferred developer had now been selected for a mix of care home and residential properties at Knowle. The planning process would have to be gone through by the developer and further attempts to delay the Knowle sale have been factored in to the costs, he added.

When Independent Cllr Claire Wright expressed concern that EDDC’s planning committee would be under extreme pressure to grant permission to develop the Knowle because the whole relocation project depended on it, she was accused of casting doubt on the integrity of councillors.

Independent Councillor Roger Giles didn’t get a clear answer from Mr Cohen about where his 10% annual energy inflation figures came from, only that they were “conservative”! And there was no answer to Cllr Giles’ second question about how much extra the renovation of Exmouth Town Hall would cost.

Tory Cllr Graham Troman (Vice Chair of the OSC) said the Knowle site was an appreciating asset while refurbished offices or new-build on an industrial estate (e.g. Heathpark) would not recoup the money spent on them.

Tory Cllr Sheila Kerridge urged her colleagues to show transparency and “not to be seen to be doing things underhand….Put the matter on hold until we know the figures”. (echoing Cllr Claire Wright’s proposal voted down a few weeks earlier.

Chair Tim Wood concluded that all would be examined in great detail by the auditors so there was no cause for alarm...

Related:
"Honiton for Sale" part 2 - some questions but very little chance of answers
"The principle interest in a report is its probity".
"I have to warn councillors, an election is coming", O&S Committee told

5 thoughts on ““Quite honestly, we have fallen flat on our face” with the relocation project, warns Honiton Councillor, Peter Halse”

I suggest Cllr Peter Halse has said what a number of other Tories are thinking at East Devon, but are scared to admit. Having refused to listen to concerns of the Independents, they now realise there really are risks involved in their relocation strategy, which they unfortunately failed to evaluate. Peter Halse was right to say it is not just the fault of the Leadership, but they do remain ultimately responsible. This strategy was primarily based on officer advice. But that fails to include any consideration of the national political climate when we may have a new government. You cannot expect officers to advise on that. But you can expect the Council Leadership to think that through in detail. They may well deny it, but I suspect, for whatever reason, they did not give it a second thought. If they had done so, the December vote may have been delayed until June. For fear of loosing face, they rushed it.

Suddenly realising that everyone is watching, some of the Sidmouth EDDC councillors are starting to back track. But it is too late. They had the opportunity to vote to delay the relocation process, but chose not to do so. Seven opposition councillors did vote for a delay, none of them from Sidmouth or the surrounding area. And certainly, none of them actually put Sidmouth first. Not even Cllr Stuart Hughes.

But there is one alternative. That is to vote Independent on 7th May 2015. Then we stand a chance of putting this totally unnecessary mess right.

“Quite honestly, we have fallen flat on our face” with the relocation project, warns Honiton Councillor, Peter Halse | East Devon Watch

The Minutes of the meeting reflect more of the 'official' position on Knowle and give considerable space to providing 'answers' to any concerns:
Minutes for Overview and Scrutiny Committee 22 January 2015

There are, meanwhile, several related issues:


EXMOUTH TOWN HALL REFURBISHMENT NOT COSTED AND BORROWING MAY BE NEEDED

“In response to a question about the cost of accelerating refurbishment of the Exmouth Town Hall if relocation to that site (as part of a dual site option) was agreed, it was confirmed that some capital could be used, but some borrowing may also be necessary which would incur costs. This acceleration has only been discussed and not agreed – the implications of it will need to be fully costed. At present there was no allocation in the capital budget to the refurbishment of Exmouth Town Hall. …”

(4) that there should be greater transparency in the Council financial information (including the Budget and Outturn report) in detailing the use and costs in obtaining external legal services and external consultancy services;

(5) that consideration be given to increasing the resources, possibly in conjunction with neighbouring authorities, for the further development of a coherent strategy and plan for the maintenance and improvement of the economic well-being of the district. (There was a suspicion that inadequate resources devoted to this activity had, amongst other things actually contributed to extra costs and delay in the production of a convincing local plan)

(7) That an annual audit review of the cost and effectiveness of external consultants is undertaken.

…As regards the wider matters of economic development, the budget has clearly been reduced considerably over the years, particularly on tourism promotion, which is now confined purely to the premises costs of some tourist information centres.

No, we didn’t know what or who the “Strategic Management Team” is either – they don’t seem to be mentioned anywhere but we are told it is the head honchos here: http://www.eastdevon.gov.uk/eddc_smt_structure_chart_sept_2014_with_salaries.pdf

Below is a question on survey design on the Whatdotheyknow website that mentions them and where EDDCs replies are “Sir Humphrey Appleton” masterpieces of using lots of words to give almost no information!

So basically the six very highest paid officers devise all questionnaires – presumably including the one that didn’t include staying at Knowle as an option – a very odd decision!

So when you read that just about everyone in East Devon is satisfied witheverything EDDC does, you know who designed the questions to give the most positive answers.

Are you: ecstatic, over the moon or very happy with their creations?EDDC's 2014 Viewpoint Surveys - an explanation. - a Freedom of Information request to East Devon District Council - WhatDoTheyKnow


TO A LOUSE”: WITH PARTICULAR REFERENCE TO COUNCILLOR MOULDING, AXMINSTER HOSPITAL AND KNOWLE RELOCATION

“To a Louse” is, of course, the poem by Rabbie Burns which contains the immortal line:

“O would some power the giftie gie us to see ourselves as others see us.”

Bear this saying in mind when reading the following report on a recent meeting about the reduction in services at Axminster Hospital sent in by a correspondent (very slightly edited of its more pungent comments) and compare it with public criticisms about Knowle relocation: a leading advocate of which is one Councillor Andrew Moulding:

“At a well attended meeting to discuss progress in the fight to maintain in-patient beds at Axminster hospital, Cllr Andrew Moulding (wearing both his Town and County councillor hats) spoke to concerned residents about his representations to the Devon CC Health and Wellbeing OSC. He made clear his feelings on the matter to the OSC and stated that his only job as a Councillor was to convey the feelings, views, anger and frustration ohf Axminster people over the shameful way in which the CCG and NDHT had conducted themselves, with misleading figures, loaded and biased consultations and the heavy handed (and expensive) use of lawyers to force a decision through…

A member of the public replied that the whole situation was ” kafka-esque ” and that despite public passion and anger and a huge response ( against the establishment view ) to the Consultation document, it seems as if the publics wishes and views were simply ignored… How do we change this state of affairs…

Jeremy Walden then waded in to say that it wasn’t his place to tell the public how to change things they didn’t like but that the day to do so was soon upon us all…. oooh, cryptic!

However, the real eye opener was when AM then said that the CCG must keep an open mind on the whole issue and could not just proceed as it pleased disregarding public sentiment and that he did not believe them when they said that ” no decisions had yet been made ” – he chuckled good naturedly – again, my only job is to pass on my electorates views, which I will do with a passion… ( confetti rained down from the ceiling, trumpets blared etc ). The CCG and NDHT have not been forthcoming with their figures, the ones they have released are flawed, they have used Commercial Confidentiality as an excuse to withhold data and this does not allow an analytical, reasoned, impartial review to take place by those opposed to the plans. THIS IS QUITE WRONG AND MUST BE CHALLENGED!

Then, oh lord yes, he came up with this peach…

We (the working party – doctors, councillors, league of friends) believe that no decision on this critical matter should be taken until after the General election as governments may change, funding may change, policies may change and so to make the decision before then would be quite wrong as there are too many unknown factors at play. (cue: rousing applause).

Compare, of course, this statement with the Cabinet view at EDDC – of which AM is the deputy Leader – regarding the HQ relocation saga. When a motion proposing a moratorium on the process was proposed by the opposition independent group, the ruling majority were outraged! Why should we hold off on major decisions until after the election; that is not democratic and simply delays good decision making and as for using lawyers to suppress the truth, issuing flawed figures, hiding behind commercial confidentiality, making decisions before consultations complete…. I don’t recall AM making a similar stand then!”

Truly some of us badly need the ability to see ourselves as others see us.

“To a Louse”: with particular reference to Councillor Moulding, Axminster Hospital and Knowle Relocation | East Devon Watch
.
.
.
Posted by Jeremy Woodward at 11:53