The District Council's Overview & Scrutiny Cttee has considered the relocation project over the last months - although the quality of the scrutiny has been questioned.

The Cttee briefly looked at relocation in June 2014:
new.eastdevon.gov.uk/media/182175/120614-os-agenda-publicv-combined.pdf
Futures Forum: "A councillor has no business being a member of a Scrutiny Committee unless he or she is prepared to ask challenging questions."
Futures Forum: “We are determined to fight on”: SOS update part 1: Knowle

Then, following on from the full Council meeting in December 2014, it was committed to a 'thorough examination of the figures underpinning the project':
Futures Forum: Knowle relocation project: 'checks and balances': the SWAP ... an appeal to the public to send in "any information about possible errors in the Council’s facts and figures..."

The District Council's consultants Davis Langdon/Aecom will be presenting a further report costing the refurbishment of Knowle - which it says would be £15m for the former hotel and £7m for the 1970s/80s block.

These figures - and the whole scope of the exercise - are questionable, to say the least.

Firstly, it has just been announced that the owners of a former hotel just down the road are committed to refurbishing the building - and it is in a much worst state than Knowle:
Futures Forum: Salston Manor: turning a 'seriously deteriorated' former hotel into apartments

Secondly, the consultants Davis Langdon/Aecom have themselves stated in another of their reports that refurbishment rather than new-build is preferable on several grounds:
Futures Forum: Knowle relocation project: 'Developers looking to get the most out of their stock in difficult economic conditions are increasingly turning to refurbishment rather than redevelopment. Davis Langdon look at the cost implications'

Thirdly, it seems that the District Council is interested in inflating the 'cost of refurbishment' simply to make the notion of relocating more attractive - and so delivering a 'cost-neutral' option:
A question for the SWAP internal auditor | East Devon Watch

And lastly, the consultants taken on by the District Council before Davis Langdon had concluded that, on the contrary, the notion of relocating was financially very unattrative:
Futures Forum: Knowle relocation project: "Initial findings found the cost of relocation to be prohibitive"

This is the first part of an entry on the East Devon Watch blog:


A BUMPER OVERVIEW AND SCRUTINY COMMITTEE AGENDA WITH SOME HIDDEN GEMS!

It really is hard to know where to start! So much to overview and (maybe not quite) scrutinise!

1. An update on relocation – the first for this committee since June 2014 (pages 14-35). Includes a long report about why Knowle is too run down to work in and the horrendous cost of putting this right. No mention of the fact that the buildings have had little or no maintenance for the at least the last 4 years (and almost certainly longer) so they have been allowed to deteriorate. Costings that would include stripping out and replacing just about EVERYTHING!

And, by the way, a little paragraph tucked away that confirms that EDDC was somehow planning to enter a “fixed price” contract for Skypark that would have been against EU regulations. Now, why wasn’t THAT spotted by the experts right at the start?

The Cttee will be presented with the Cabinet's decisions of 3rd December
Relocation Update – key decision: Cabinet - 3 December 2014

... as well as with the further report from consultants Davis Langdon/Aecom: 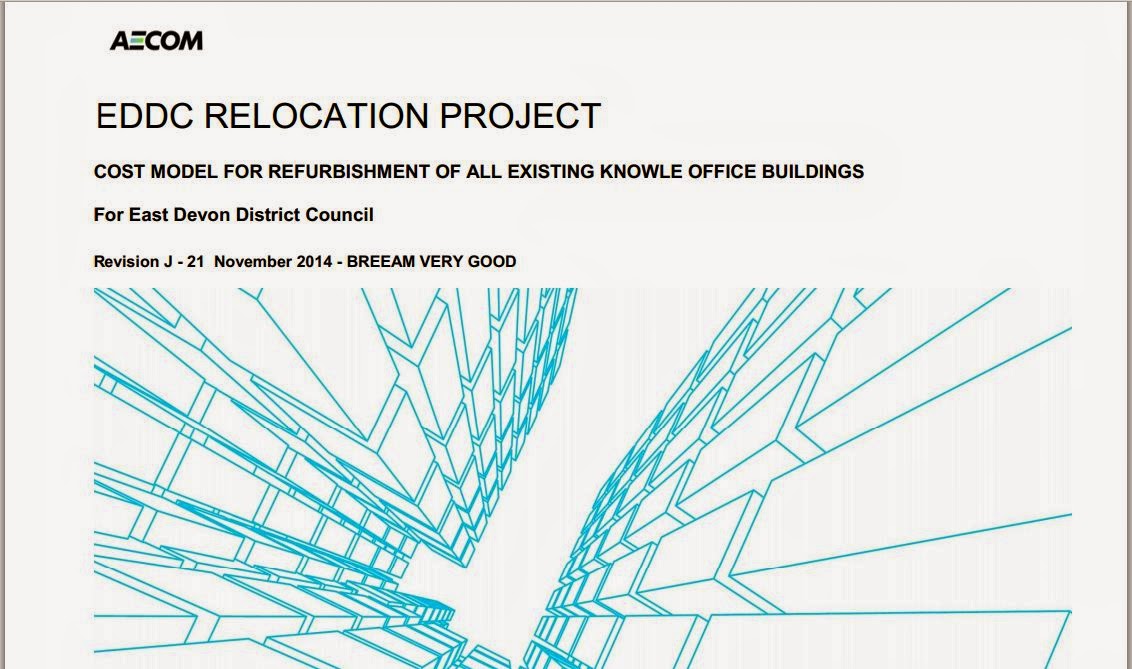 Following a request from Steve Pratten a cost model has been produced to provide an indication as to the order of cost for refurbishment of the existing premises based on an overall gross internal area of 7,722 m2. The standard cost model has been adjusted to reflect the two different construction types consisting the former hotel building previously converted to offices and the purpose built concrete framed office building

- Upgrade to the thermal performance and carbon efficiency of the building and achievement of minimum BREEAM Very Good rating.

This cost model has been provided as an approximate indicative cost subject to further scoping, detailing and design. These costs have been based on AECOM's standard Cost model for office refurbishment for the use of EDDC only and are not intended for the use or manipulation by a third party without AECOM's prior consent.