The prospect of Greece leaving/being ejected from the Euro has concentrated minds a little on the benefits or otherwise of monetary union:

Instead of raising living standards across Europe, monetary union is pushing them downwards.
Greece is a sideshow. The eurozone has failed, and Germans are its victims too | Aditya Chakrabortty | Comment is free | The Guardian

Against the Troika: Crisis and Austerity in the Eurozone, by Heiner Flassbeck and Costas Lapavitsas | Times Higher Education

But what are the 'alternatives'?


"It's an easier, more direct way of exchanging goods and services. "It's also a way of showing practical solidarity — of building relationships." Maria Choupis, co-founder of the TEMs network, echoed that sentiment regarding the local alternative currency systems: “They are as much social structures as economic ones. They foster intimacy and mutual support.”
Greek Town Taps Bartering for a More Shareable City - Shareable
Greek Town Develops Bartering System Without Euro - YouTube

As Greece wonders whether its debt crisis will eventually spell its exit from the euro, one town in the centre of the country, Volos, has formed an alternative local currency.
Greek town develops bartering system without euro - BBC News 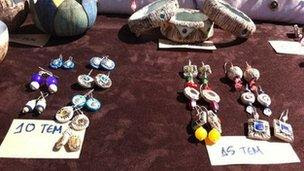 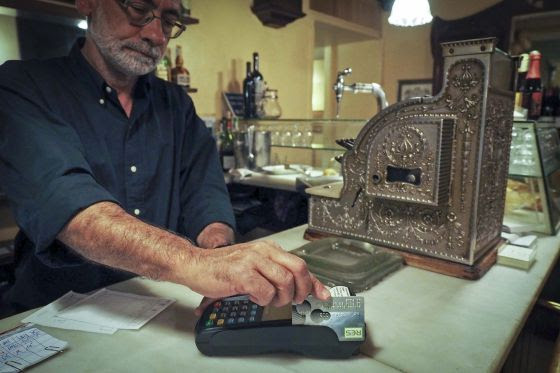 During her election campaign, the new mayor of Barcelona dropped hints about her plans to create an alternative currency for use in the Catalan capital.
Ada Colau, a social activist who made a name for herself fighting against home foreclosures, is now in a position to make good on her vision after taking office last Saturday.
The idea is for local stores and residents to be able to exchange euros for this new currency, and use it to purchase products and services at a discount or with other kinds of advantages. Municipal workers may also receive part of their salary in the new money. The exchange rate would be one-to-one.

An alternative currency for Barcelona? | In English | EL PAÍS

There is also the idea of a national 'parallel currency':

Greece’s Finance Minister Yanis Varoufakis wrote a blog post in February proposing a similar IOU-based currency, which he dubbed Future Tax Coin (FT-Coin). Varoufakis is not impressed by bitcoin as a currency, but he is persuaded that its underlying technology could be put to effective use in troubled economies.
“[T]he technology of Bitcoin, if suitably adapted, can be employed profitably in the Eurozone as a weapon against deflation and a means of providing much-needed leeway to fiscally stressed Eurozone member-states,” said Varoufakis. His post explained in detail how Greece could create an FT-Coin payment system with a Bitcoin-like algorithm to make it transparent, efficient and transactions-cost-free.
Recently, CNBC contributor Brian Kelly, the author of “The Bitcoin Big Bang: How Alternative Currencies Are About to Change the World,” proposed a similar bitcoin-like solution for Greece’s troubled economy. Kelly notes that Greece could stay in the Eurozone and begin repaying its debt, but for that it needs a method to monetize state-owned assets while still maintaining ownership. Kelly is persuaded that a digital currency based on blockchain technology could provide the solution.
Now, one of the most prestigious financial news sites analyzes whether the creation of an alternative currency could help toward a solution of Greece’s financial problems. “Could a Parallel Currency Help Save Greece From Drowning?” asks Peter Coy on Bloomberg Business. Coy reports that even German Finance Minister Wolfgang Schaeuble has said that Greece may need a parallel currency if talks with creditors fail, according to sources familiar with Schaeuble’s views.
Economists Disagree on Proposals for Alternative Currencies in Greece – Bitcoin Magazine
Mulling alternatives to the euro in Greece | Business | DW.COM | 22.06.2015

Bitcoin is everywhere in the news:
The Morning Download: CIOs Build Open Source Bridge to Bitcoin - The CIO Report - WSJ

But what is this bitcoin alternative?
10 alternative currencies, from Bitcoin to BerkShares to Tide | TED Blog


Bitcoin uses peer-to-peer technology to operate with no central authority or banks; managing transactions and the issuing of bitcoins is carried out collectively by the network. Bitcoin is open-source; its design is public, nobody owns or controls Bitcoin and everyone can take part. Through many of its unique properties, Bitcoin allows exciting uses that could not be covered by any previous payment system.
Bitcoin - Open source P2P money
What is Bitcoin? (v2) - YouTube
Bitcoin - Open source P2P money
CryptoCurrency Films - Bitcoin: The End of Money As We Know It

Which brings us to 'the end of money'...

... non-profit organisations, governments, the World Bank, small businesses, multinational corporations, app developers, hippies, libertarians, liberals, right-wingers all have agendas that can be advanced by alternatives to cash, and they're all pushing to bring them about.
When company A in Tokyo sends a dollar-denominated payment to company B in Chicago, the funds get converted from yen into bitcoin, and then immediately converted from bitcoin into dollars before making their way to the payee’s bank account.
The bitcoins are like a freight car, carrying the funds (information, really) on the silky-smooth rails of the bitcoin network.
The battery against cash is coming from three fronts - new technologies, scepticism about the stewardship of sovereign currencies and increased enthusiasm for alternative currencies, and greater scrutiny about cash's myriad costs.
But the most consequential aspect of this monetary revolution is growing recognition that the costs of cash fall disproportionately on the poor.
Digital tools are already providing millions of people worldwide with the opportunity to avoid cash. And avoid it they do. They are storing value and transacting by way of electronic accounts "on" their mobile phones. For the first time, people who were trapped in the informal economy can steer clear of usurious local moneylenders, save precious time and money, and benefit from the basic financial services that you and I take for granted.
What matters far more is the potential for digital money innovations to improve the welfare of so many.
Killing off cash: Could new tech mean the end of money? - BBC News
The 'death of cash': David Wolman | WIRED Money (Wired UK)The 'internet weirdos' of bitcoin are changing the way money works | Business | The Guardian
The Slow Death of Cash | MIT Technology Review

In French, a man (or woman) who is particularly resourceful is called a débrouillard (débrouillarde). In the former French colonies of West Africa, people have used this word to form a phrase, “l’economie de la débrouillardise” which refers to the vast network of “inventive, self-starting, entrepreneurial merchants who are doing business on their own, without registering or being regulated by the bureaucracy and, for the most part, without paying taxes.” Systeme D for short.
Yet there is a lesson we can take from the Systeme D economies. Our economy is becoming increasingly hog-tied with regulations. We could make a big dent in unemployment if the politicians and bureaucrats would lighten up a bit and allow the “informal economy” to grow. Yes, the politicians and bureaucrats and lawyers are to blame but they take their cues from consumers who demand near-perfection in product offerings and unlimited product liability.
How the Black Market Runs the Developing World : Anything Peaceful : Foundation for Economic Education

There are several books out on the subject, and an interesting blog or two:

The End of Money and the Future of Civilization | Beyond Money