Cycle paths in Sidmouth... and Dawlish... and Cambridge

There have been all sorts of moves to increase opportunities for cyclists in Sidmouth, some slower, some faster than others:
Futures Forum: "Work progressing to develop Sidbury and Sidford trail"
Futures Forum: Devon Cycling Strategy: agreed... but 'it will need to be more targeted and selective about which projects it invests in'

Meanwhile, cyclists are resorting to rather irresponsible behaviour:

Sidmouth resident Bert Hague is calling for cyclists to dismount while on the path between the parish church and the hospital. Ref shs 0228-25-15SH. Picture: Simon Horn

Cyclists need to be reminded that they are not allowed down a town footpath, insists a retired teacher after several close calls.
Bert Hague is calling on the district council to renew the signage on the route between the parish church and Sidmouth Victoria Hospital, writes Stephen Sumner.
He had recently had an operation when two separate bike riders ‘came flying down’ and nearly sped into him on the same day. There are about three places where they come out and can’t see who’s coming – they could do a lot of damage,” said the 74-year-old, of Manstone Close. “I’ve noticed it for a couple of years and normally tell them [the cyclists]. Now I’ve just had an operation and don’t want to get thumped. I would hate to have a situation where some old lady gets hurt by a bike when it could’ve been prevented. A sensible solution would be paint ‘no cycling’ on the ground.”
He said he thought the new signs painted on the ground on the Esplanade had proved effective at deterring cyclists.
A Devon County Council spokesman said: “It’s important cyclists follow the same rules as other road users and dismount as directed on this stretch of path until we can renew the signs.”
Don’t cycle down path - News - Sidmouth Herald

Meanwhile, other parts of Devon seem to be doing very well:

Dawlish businesses to benefit as cycle trail extends into town

Environment Minister Dan Rogerson visits Dawlish
Businesses in Dawlish and Dawlish Warren will benefit from plans to extend the 16 mile Exe Estuary cycling trail into the heart of the town along with other improvements in the Dawlish Warren area.
The trail will link up with Dawlish’s railway station, which, with the line itself, has seen significant investment since winter storms in early 2014 dramatically severed rail links with the south west.
£1.3 million funding from Government’s Coastal Communities Fund has been announced today (Monday 26 January) for the scheme, following a successful bid led by Devon County Councilwith support from Teignbridge District Council, Dawlish Town Council and Sustrans.
Environment Minister, Dan Rogerson, is visiting the town today to see the plans and to hear how local businesses will benefit.
The picturesque Exe Estuary Trail currently stops short of Dawlish town centre, having hugged the estuary from Exmouth around to the popular Dawlish Warren.
Cyclists and pedestrians alike have enjoyed the trail in sections as it’s been completed, with the most recent phase, linking Turf Locks and Powderham, finished as recently as Christmas.
Now, with Government funding as well as other local grants, and including a contribution from development in Dawlish, the trail will be extended from Exeter Road, into the town centre and rail station.
The scheme will improve crossing facilities into the main shopping and leisure area around the Strand and Lawn. New cycle parking facilities will be created at the railway station and at other locations in the town and Dawlish Warren. A cycle hire facility will be based at Dawlish Warren. And there will be new heritage walking trails, with informative interpretation boards along their route.
The vision for the scheme grew from a local ‘Transition Dawlish’ group, who first wanted to create the cycleway into the town’s centre.  And now with the funds behind them, the plans on paper will soon become reality.
For the town, the funding represents another building block on which to boost its local economy, by attracting more visitors into the town.
A draft plan of the route is available here. Dawlish Coastal Communities Fund plans.
Environment Minister, Dan Rogerson said:
“Dawlish already has so much to offer and this new path for walkers and cyclists can only build on this – linking the town to the Exe Estuary trail and helping to make the town a year round destination.
“We want to see our seaside towns flourish and this money will enable Dawlish to develop its tourism, create jobs for residents and so build a stronger local economy.”
Councillor Stuart Hughes, Devon County Council’s Cabinet Member with responsibility for cycling said:
“This funding is vitally important for the benefits it will deliver to local businesses in Dawlish, and along the entire length of the Exe Estuary Trail, by encouraging visitors into the town centre and at Dawlish Warren.  The scheme is also important as part of the infrastructure needed to enable the planned growth of Dawlish, and for the increased levels of recreation, fitness and health, for local residents.”
Dawlish businesses to benefit as cycle trail extends into town | News centre
Dawlish businesses to benefit as cycle trail extends into town | Sustrans

Here is a map of the route into Dawlish: 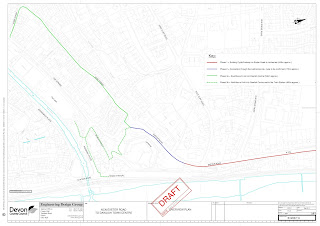 https://www.devonnewscentre.info/files/2015/01/Dawlish-Coastal-Communities-Fund-plans.pdf?8bda55
Exe Estuary cycle trail to be extended into centre of Dawlish | Exeter Express and Echo

It would be nice to have a network as good as Cambridge enjoys - as sent in by a correspondent: 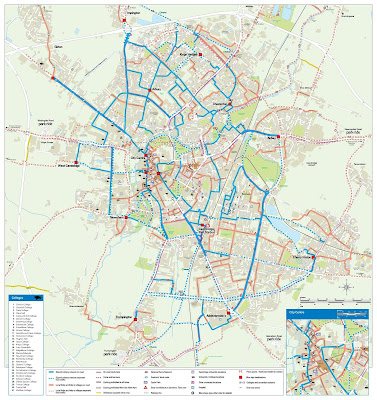