There have been many concerns expressed about the District Council's proposals for its beach huts:
Futures Forum: Save East Devon Beach Huts campaign launched

And there has been some lively debate on the Streetlife social media site:
Streetlife | Beach Huts Consultation.

A correspondent has sent in this view:


In respect to the SVA Heritage project, does it include special vistas or the town’s fine Georgian and Victrian street configurations? Would for instance the beach huts spoil the classic view twards Peak Hill. Isn’t this another commercial opportunity for the EDDC asset stripper’s to trash the place.

This is an impression of the vista as it currently looks, courtesy of the artist: 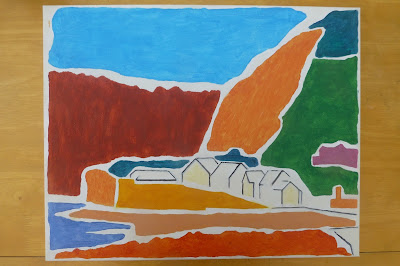 And further along the coast there has been further reaction:

BEACH hut owners in Exmouth have reacted with despair over the proposals by East Devon District Council to sell off the beach huts in the town to the highest bidder.

Cherry Hopley said: “The plans are not for local people. We live in Exmouth and those who have double incomes are going to bid double what we can as we only have one income so we’ll be outbid every time.”

She said they were on a waiting list for five years for the hut and had now had the use of it for two years.

Mrs Hopley added: “The beach hut is a Godsend. I had cancer two years ago and the hut has helped in my recovery and I think it is unfair as the council is going on finance and not need. I feel it is like taxing the poor. Why not have a lottery system instead? If they want to move people off the list I can understand it but have a lottery system. They are so iconic that they symbolise the town. If you go to Nat West they have a poster of the huts.”

“It is unfair on local people and they are being hard-done by in East Devon. This is one little perk they should be allowed to keep. I went to the town council meeting recently about it and the town council were overwhelmingly opposed to the proposals.”

EDDC said: “We think it is only fair that everyone – from East Devon residents to visitors – should have the opportunity to hire a beach hut, site or chalet. This consultation is a great opportunity for people to give us their views on the service they would like to receive from us.”

“We have a responsibility to make sure that public money is spent in the best way possible. If we can collect more from this enterprise than it costs us to provide it, we can also improve our beach hut, chalet and beach hut site service. Any surplus funds would be re-invested in other council services.”
RELATED CONTENTUproar over Exmouth beach huts: East Devon District Council slammed over "auction" plan'Save East Devon beach huts' campaign launched after controversial 'highest bidder' plans announcedRevealed: Exmouth seaside businesses set to close this autumn due to redevelopment plansExmouth beach huts could go to rich under highest bidder plans
Despair of Exmouth beach hut owners who'll see huts flogged to highest bidder | Exeter Express and Echo
Latest Exeter News | Exeter Express and Echo
.
.
.
Posted by Jeremy Woodward at 02:30