Neighbourhood plans: "Rule number one is that you have to accept the need for development."

The District Council has shown some keenness on having local towns and communities get on with a Neighbourhood Plan:
Futures Forum: The District Council: housing numbers and neighbourhood plans: "It is important that we should encourage all our settlements to make themselves sustainable for the sake of generations to come."

There's also money in the pot:
Futures Forum: More funding for Community Rights >>> “This Government has trusted local people and given them new rights, introduced by the Localism Act, so they decide how to run their community."

It is understood that the council meeting of Monday 6th July will have the Neighbourhood Plan on the agenda:
Town Council Meetings - Sidmouth Town Council

Meanwhile, the subject is gaining more and more interest nationally:

Neighbourhood plans give small communities the chance to be masters of their destiny. Set your own agenda

Lofty ambitions: members of the Bankside Neighbourhood Forum have proposed this walkway between London Bridge and Waterloo
When a developer wanted to build 115 homes on a greenfield site beside the Oxfordshire village of Woodcote in 2011, residents reacted with predictable nimbyism, writing 400 objection letters. Two years on, they voted 91% in favour of a plan for 76 new homes on their doorstep by 2027. What happened in between? A neighbourhood plan.
As Woodcote’s residents found, there is a town planner lurking within all of us. The Localism Act 2011 gave communities the chance to express this, empowering them to produce their own planning blueprint. If it is consistent with national planning policy, and approved in a local referendum, it will be is incorporated into the council’s local plan — part of the statutory documentation on which planners must base their decisions.

Here is the article in full: 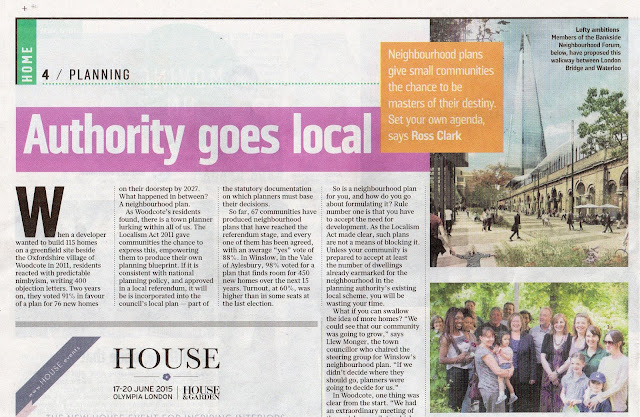 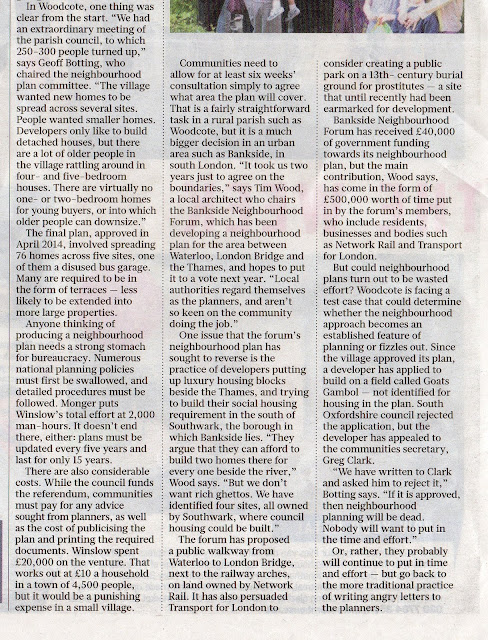