The Transatlantic Trade and Investment Partnership >>>> "an increasingly contentious topic"

However, the Transition Town movement is very much part of a wider concern about the TTIP deal: 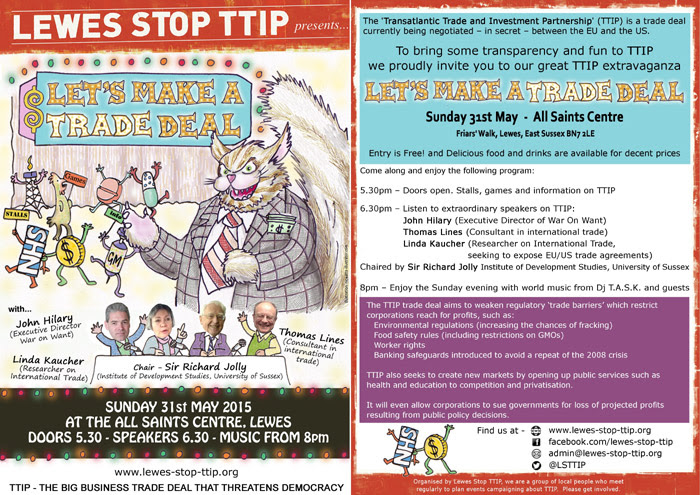 The whole TTIP thing is now very much in the eye of the mainstream media - with every side upping the ante, as a lot is at stake.

But there is now considerable opposition growing:
G7 protesters unite in opposition to TTIP under the alpine sun | World news | The Guardian

And this is coming from all points in the political compass:
Trans Pacific Partnership Is about Control, Not Free Trade : Anything Peaceful : Foundation for Economic Education
10 Reasons Why You Should Oppose TPP and TTIP - The New American
"The Death of Democracy" a public talk on the TTIP - YouTube
“Profit Over People” Noam Chomsky | Life: after fossil fuels

And much of it is about lack of transparency:
Regulatory chill? Why TTIP could inhibit governments from regulating in the public interest : Democratic Audit UK
What Drives Governments to Keep TISA, TPP and TTIP Secret? | Opinion | teleSUR English

Here's a handy guide from the Telegraph:

What is TTIP and why is it so controversial?

An obscure free trade agreement has attracted a huge wave of protest across the EU - so much so that the European Parliament has put it on hold. What's the big deal?

36 Comments
An new acronym has being plastered all over headlines, online petitions and protesters' signs – TTIP.
Eyes can glaze over and brains can switch off at the mere mention of this EU treaty. But, in political and economic terms, it is hugely important.
Opponents argue that it could jeopardise the NHS and leave the UK open to being sued by foreign companies.
After being put on hold in the European Parliament, TTIP is the focus of more scrutiny.
Here's what you need to know to get up to speed on this increasingly contentious topic.

It stands for the Transatlantic Trade and Investment Partnership, sometimes called TAFTA – the Transatlantic Free Trade Area.
It is a free trade deal between the US and Europe, currently under negotiation, which would cut tariffs and lower regulatory barriers to make trade easier between the two markets.
It would be the biggest trade agreement of its kind, affecting one quarter of global trade.

I'm afraid it's not. MEPs in the European Parliament have just postponed a vote on it and left-wingers have stuck on a raft of amendments to hold it up.
There has been a huge amount of public backlash and organised campaigning against it.
Labour MEP Judith Kirton-Darling said “I have received an unprecedented number of emails from constituents and campaign groups".

• This trade deal with America would have Churchill beaming
• Cornish pasty ‘threatened by EU-US trade deal'
They only have so much power, though – MEPs only have the power to veto any agreement they don’t like. The European Commission is doing the negotiating behind closed doors.
The Conservatives, Labour and the Liberal Democrats all broadly support the TTIP, although Labour has called for the NHS to be better protected.

So how does it affect me?

Supporters of TTIP say that lower European tariffs will benefit shoppers by making goods cheaper and creating more choice.
The Government claims the average household could benefit by up to £400 a year, and that TTIP could boost the UK economy by as much as £10bn. The deal could provide a £100bn boost to the whole EU.
• Failure of trade talks would cause 'very considerable costs to the UK', warns House of Lords
• Britain doesn't need to be in Europe to strike important trade deals
The agreement, they argue, would create a more integrated marketplace, and would help secure the US-EU partnership as the central axis of the global economy.
The government also claims that the deal would help small businesses by opening up markets and making customs processes smoother.
TTIP would reduce trade tariffs, which stand at over 20pc on some food and drink products (for example, orange juice, tuna and mackerel).

That sounds great for the consumer. So why are some people against it?

The trade deal has seen a huge public backlash across the EU and, notably, online. 38 Degrees, a pressure group, has carried out a sustained campaign against it, and has gathered more than two million signatures on its petition.
Opponents argue that it could lead to the privatisation of the NHS because the treaty includes 'market access' which bans state monopolies – including public services run by the state.
Part of the agreement would allow big companies to take the government to court – in secret. Many argue that it represents a threat to democracy.
This refers to the Investor-State Dispute Settlement (ISDS) mechanism, which allows companies to take legal action against countries they perceive to be hindering potential profits.

A protest against TTIP in Germany (Photo: Reuters)
These kinds of cases are increasing in number. Opponents argue that the ISDS can deter governments from enacting policies to benefit the environment, for example, in case they trigger an ISDS action from a foreign company.
The German government, for example, shut down its nuclear power industry after the Fukushima disaster in Japan in 2011. Due to an ISDS clause in a treaty covering energy investments, Vattenfall, a Swedish utility that operates two nuclear plants in Germany, was able to demand compensation of €3.7bn from the government.
The ISDS mechanism was originally conceived as a means of encouraging companies to invest in countries where they might not expect to get a fair hearing in court if should there be a legal dispute. The hearings are not held in court but judged by three arbitrators.

That sounds potentially worrying. What else is in the treaty?

Environmental campaigners have raised concerns: TTIP would bring the EU's food and environmental safety regulations in line with the US's less strict laws.
In order to align the EU and laxer US rules, the agreement could weaken European and UK regulation in areas including genetically modified crops, chemicals in cosmetics and meat treated with growth hormones. There is widespread opposition to this environmental aspect of the treaty, especially in Germany and France which are major opponents of genetically modified products.
For example, the EU bans 1,200 chemicals from cosmetics, whereas the US bans just 12.

The Labour party and other EU officials want wording within the treaty that means governments will remain free to run public services like the NHS.
The EU has said that it always negotiates these kinds of exemptions within treaties. But some don't trust the EU to make them.
The treaty most likely has to be ratified by all national parliaments, as well as by the EU. At this rate, it will take some time before it is legally binding.

What is TTIP and why is it so controversial? - Telegraph