Here's quite a revealing graphic: 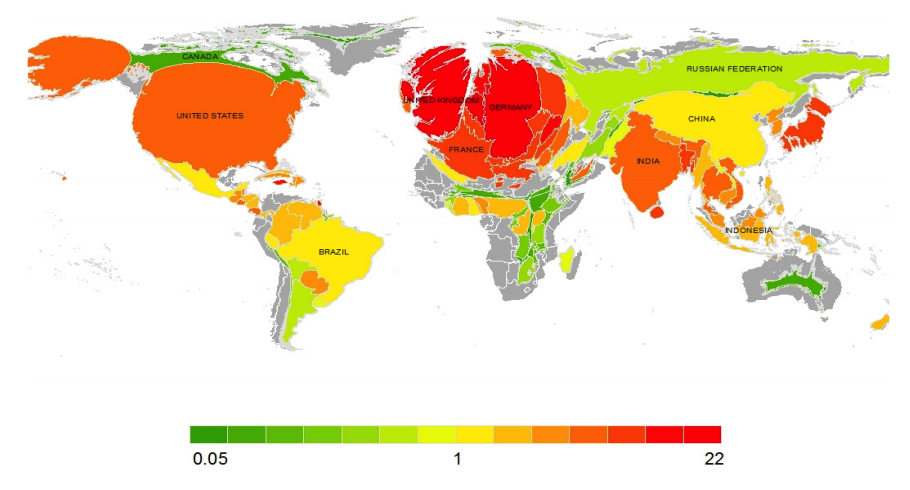 Here's part of the research which put together this startling picture:

Author: Alan Murray-Rust
The United States is responsible for a whopping 20 per cent of the warming the world's experienced over the industrial period, according to new research. But when you look at emissions per person, the UK beats the US into first place.So which other countries are taking more than their fair share of the global warming pie?
Countries have contributed differently to the build-up of greenhouse gases in the atmosphere. So some countries could be considered more or less to blame for global warming than others.
A new study published in Environmental Research Letters puts that theory into action, ranking countries in order of how much their historical emissions have contributed to observed temperature rise over the industrial period.
Global rankings
The scientists from Concordia University in Canada examined each country's greenhouse gas emissions between 1750 and 2005. Alongside carbon dioxide from fossil fuel burning and land use change, they included methane, nitrous oxide and sulphate aerosol emissions.
Some of the results perhaps aren't too surprising. They show a small number of countries account for a large share of total greenhouse gas emissions.
The biggest emitters - US, China, Russia, Brazil, India, Germany and the UK - are together responsible for 63 per cent of total emissions. The US is way out in front, contributing more than double the emissions of China in second place.
The authors explain why the UK's contribution may seem large given its small size. They say in the paper:
"The UK's position in the top-seven emitters is strongly tied to historic use of coal, which constitutes a large fraction of their cumulative fossil fuel carbon dioxide  emissions. By contrast, much more recent coal use in China has led to a much faster current growth rate of cumulative carbon dioxide emissions, and hence a contribution to climate warming that will continue to increase rapidly in the coming years"
Some less developed countries like Brazil sit quite high up in the rankings because they have been turning large amounts of forest into cropland. The authors explain:
"While some countries' warming contributions are reasonably well defined by fossil fuel carbon dioxide  emissions, many countries have dominant contributions from land-use carbon dioxide and non-carbon dioxide greenhouse gas emissions."
Working out individual countries' total historical emissions is a hugely complex task, and there's quite a bit of uncertainty involved. That's why the authors say in the paper their list should be considered a "reasonable best guess" and "one realization of a complex calculation rather than as a deﬁnitive country ordering".
Disproportionate warming
The researchers experimented with an eye-catching way to illustrate the differences between countries' emissions. In the map below, each country has been stretched or shrunk to reflect whether its emissions are high or low relative to its geographic area.
Some places look very distorted - Japan, India and most of western Europe including the UK, for example - indicating they've caused disproportionately more warming that their size would suggest.

Whichever statistics are taken, it is clear that the UK has a considerable responsibility to reduce its emissions:
The Climate Change Act and UK regulations | Committee on Climate Change
2010 to 2015 government policy: greenhouse gas emissions - GOV.UK

However, there is still a wider reluctance to accept this - as reported in the Asian media:

London, June 8 (ANI): The United States and the United Kingdom, although the two biggest emitters of greenhouse gases in the world, are more reluctant to address the problem of climate change as compared to countries like China, a survey has revealed.
International internet-based market research firm YouGov found that almost 17 percent people in the U.S. and seven percent in the U.K. did not "agree to any international agreement that addresses climate change," reported The Independent.
Their survey, which was carried out just months ahead of December's climate change talks in Paris, revealed that only one percent refuted global agreements on climate change In China and Indonesia, while 60 percent wanted their representatives to play an active role in setting ambitious targets to address the issue as quickly as possible.
The study further suggested that the reluctance to tackle the problem in the U.S. and the U.K. seemed to have emanated from the belief that there is no problem at all. On being asked, "how serious the problem was, if at all," at least 32 percent of the respondents said, "not at all or not very."
The unwillingness of the world's two major polluters as well as global powers may impact the climate change negotiations later this year. YouGov noted that a failure to reach an agreement in Paris would likely be met with disappointment throughout the world.
In December, global powers will converge in the French capital to discuss an international agreement that many believe could be humanity's last chance to limit the harmful impact of climate change on the world and the human race.
YouGov based its analysis on surveys conducted between May 22 and May 27. It said that in China, all questions were taken online, which could have had affected the results.

Here is the original article from the Independent:

While people in China and the rest of Asia want their governments to be ambitious in tackling environmental damage, many in the West want their representatives not to do anything at all
ANDREW GRIFFIN Monday 08 June 2015

They're the two biggest emitters of greenhouses gases in the world — but the US and China have very different ideas about tackling the problem of climate change.

In a new survey taken months before officials meet for perhaps the most significant climate change talks ever held, YouGov found that people the US and UK lag far behind countries including China in wanting those talks to produce a meaningful commitment to address climate change.

In December, international representatives will meet in Paris to discuss an international agreement that some think could be humanity's last chance to limit the terrible effects climate change could have on the world and its population. But much of the US and the UK don't want their governments to do anything at all.

Even though further afield, there is real interest to 'do something':
Poll: 90 per cent of world supports carbon tax to tackle climate change - 09 Jun 2015 - News from BusinessGreen