Are we running out of resources?

This month, there has been a lot of talk of 'overshooting' our natural resources:
We’ve Consumed More Than the Earth Can Produce This Year

The day when consumption becomes unsustainable is getting earlier every year

Known as Earth Overshoot Day, the moment when humanity exceeds nature’s budget for the year was reached on 13 August – six days earlier than in 2014.
Calculated by the Global Footprint Network (GFN) sustainability think-tank, the landmark is a relatively recent concept. Humanity lived within the Earth’s means up until 1970 but, driven largely by carbon emissions, it has been in steadily increasing debt ever since.
It means humanity is on course to consume the equivalent of 1.6 Earths this year and, if the current course is maintained, we will be using the resources of two Earths per year by 2030.
The only way to reverse the trajectory of Earth Overshoot Day and push it back later in the year, GFN’s president Mathis Wackernagel said, is to drastically cut carbon emissions.
“Humanity’s carbon footprint alone more than doubled since the early 1970s, when the world went into ecological overshoot,” he said.

Looking forward to the COP 2015 UN climate summit in Paris later this year, Wackernagel said that meeting the global commitment to reduce emissions 30 per cent by 2030 would see Earth Overshoot Day pushed back to 16 September.
Wackernagel said: “We cannot stress enough the vital importance of reducing the carbon footprint, as nations are slated to commit to in Paris. It is not just good for the world, but increasingly becoming an economic necessity for each nation.
“We all know that the climate depends on it, but that is not the full story: Sustainability requires that everyone live well, within the means of one planet. This can only be achieved by keeping our Ecological Footprint within our planet’s resource budget.” 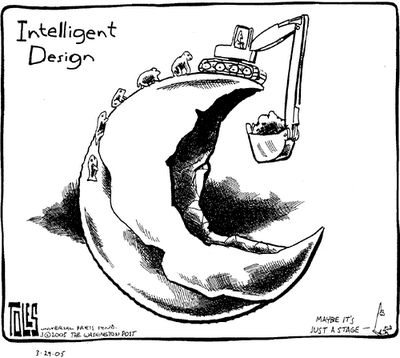 Sustainable Futures: What should organisations in Vietnam be doing to…

What is Earth Overshoot?

Global overshoot occurs when humanity’s annual demand for the goods and services that our land and seas can provide—fruits and vegetables, meat, fish, wood, cotton for clothing, and carbon dioxide absorption—exceeds what Earth’s ecosystems can renew in a year. Overshoot means we are drawing down the planet’s principal rather than living off its annual interest. This overshoot leads to a depletion of Earth’s life-supporting natural capital and a buildup of carbon dioxide in the atmosphere. Learn more

It depends how you define 'scarcity':
Futures Forum: Transitioning to a post-scarcity world

Some would say that the case has indeed been wildly overstated:
Futures Forum: Sustainable development >>> land is not a limited resource >>> and there are no limits to growth
Futures Forum: "Abundant, cheap electricity has been the greatest source of human liberation in the 20th century."

Environmental Doom-mongering and the Myth of Vanishing Resources

Media outlets ranging from Newsweek and Time, to National Geographic and even the Weather Channel, all recently ran articles on the so-called “Overshoot Day,” which is defined by its official website as the day of the year

When humanity’s annual demand for the goods and services that our land and seas can provide — fruits and vegetables, meat, fish, wood, cotton for clothing, and carbon dioxide absorption — exceeds what Earth’s ecosystems can renew in a year.

This year, the world allegedly reached the Overshoot Day on August 13th. Overshoot Day’s proponents claim that, having used up our ecological “budget” for the year and entered into “deficit spending,” all consumption after August 13th is unsustainable.
Let’s look at the data concerning resources that, according to Overshoot Day’s definition, we are consuming unsustainably. (We’ll leave aside carbon dioxide absorption — as that issue is more complex — and focus on all the other resources).
Fruits and vegetables
Since millions of people rose from extreme poverty and starvation over the past few decades, the world is consuming more fruits and vegetables than before. We are also producing more fruits and vegetables per person than before. That is, partly, because of increasing yields, which allow us to extract more food from less land. Consider vegetable yields: 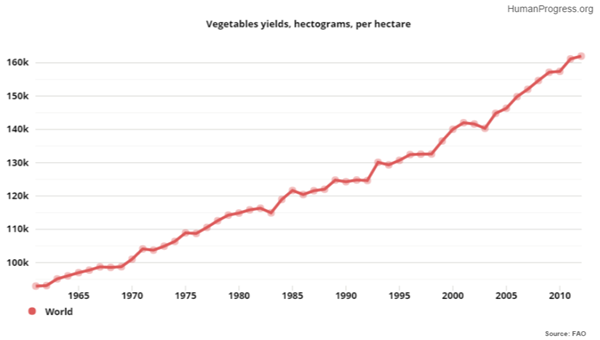 Meat and fish
As people in developing countries grow richer, they consume more protein (i.e., meat). The supply of meat and fish per person is rising to meet the increased demand, just as with fruits and vegetables. Overall dietary supply adequacy is, therefore, increasing.
Wood
It is true that the world is losing forest area, but there is cause for optimism. The United States has more forest area today than it did in 1990.
As Ronald Bailey says in his new book The End of Doom, “In fact, except in the cases of India and Brazil, globally the forests of the world have increased by about 2 percent since 1990.”
As the people of India and Brazil grow wealthier and as new forest-sparing technologies spread, those countries will likely follow suit. To quote Jesse H. Ausubel:

Fortunately, the twentieth century witnessed the start of a “Great Restoration” of the world’s forests. Efficient farmers and foresters are learning to spare forestland by growing more food and fiber in ever-smaller areas. Meanwhile, increased use of metals, plastics, and electricity has eased the need for timber. And recycling has cut the amount of virgin wood pulped into paper.

Although the size and wealth of the human population has shot up, the area of farm and forestland that must be dedicated to feed, heat, and house this population is shrinking. Slowly, trees can return to the liberated land.

Cotton
Cotton yields are also increasing — as is the case with so many other crops. Not only does this mean that we will not “run out” of cotton (as the Overshoot Day proponents might have you believe), but it also means consumers can buy cheaper clothing.
Please consider the graph below, showing U.S. cotton yields rising and cotton prices falling.

While it is true that humankind is consuming more, innovations such as GMOs and synthetic fertilizers are also allowing us to produce more. Predictions of natural resource depletion are not new.
Consider the famous bet between the environmentalist Paul Ehrlich and economist Julian Simon: Ehrlich bet that the prices of five essential metals would rise as the metals became scarcer, exhausted by the needs of a growing population. Simon bet that human ingenuity would rise to the challenge of growing demand, and that the metals would decrease in price over time. Simon and human ingenuity won in the end. (Later, the prices of many metals and minerals did increase, as rapidly developing countries drove up demand, but those prices are starting to come back down again).
To date, humankind has never exhausted a single natural resource. To learn more about why predictions of doom are often exaggerated, consider watching Cato’s recent book forum, The End of Doom.
A version of this post first appeared at Cato.org.

Chelsea German works at the Cato Institute as a Researcher and Managing Editor of HumanProgress.org.
Environmental Doom-mongering and the Myth of Vanishing Resources | Foundation for Economic Education
Overshoot Day Underestimates Human Ingenuity | Cato @ Liberty
.
.
.
Posted by Jeremy Woodward at 01:00