For some time now, we have been looking to the UN conference in Paris at the end of the year:
Futures Forum: Climate change: from New York September 2014 to Paris November 2015

The group Avaaz is at the forefront of campaigning: 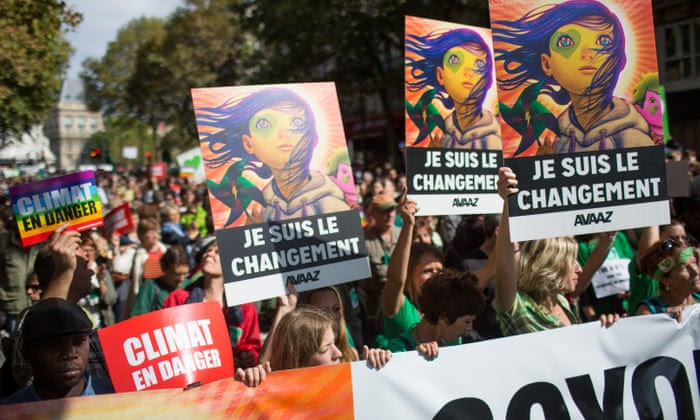 Creating a world powered on clean energy to save ourselves from climate catastrophe is a central challenge of our time, and requires a revolutionary transition in our economies. We can’t wait for our leaders to solve this problem; unless they feel serious public pressure, they’ll never go far enough or fast enough. Revolutions start with people, not politicians.
To survive the 21st century, we must discover the sense of common purpose that has driven revolutionary change through history, building a mass movement to stretch what our politicians believe is possible. We must lead, not follow, and bring leaders with us. 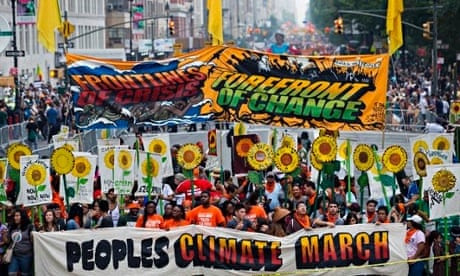 View gallery
In the years leading up to 2014, as the gap between what the science demanded and our politicians delivered widened, fatalism began to creep into parts of the climate movement. Then a handful of organisers took a major bet on the power of people – calling for the largest climate change mobilisation in history to kick-start political momentum.
And wow, did it work. The People’s Climate March in September last year was, without any doubt, a game-changer. Nearly 700,000 of us took to the streets, by far the largest climate mobilisation ever. The marches were hopeful, positive, inclusive. Amazingly, around the world, not a single person was arrested. Thousands of organisations, from environmental activists to faith groups to labour unions, came together, showing that climate change is no longer a ‘green’ issue, it’s an everyone issue now.
The impact on politicians was palpable. Dozens of top cabinet ministers actually joined the march, as well as UN secretary general Ban Ki-moon. As the roar of the crowd washed over them, I saw the realisation on their faces that they were witnessing history. At the UN summit the next day, leader after leader cited the marches and their intention to be more ambitious.
In the months that followed, experts told us that there was no way that Europe would adopt a target of “at least 40%” carbon emissions reduction by 2030. But with steady campaigning and the leadership of some of those ministers who attended the march, they did. Then the US and China came out with surprisingly strong emissions commitments, with China committing to peak their emissions by 2030 – a massive step. The momentum has continued, with a divestment movement shaming the fossil fuel industry, major corporations embracing clean energy, and the Pope bringing his massive moral credibility to bear on the issue. And the movement has flourished, with thousands of new flowers blooming, and growing direct action activism raising the moral urgency of the issue.
The UN climate summit in Paris this December will be the biggest global climate summit this decade. The national and global stages work in tandem, either dragging each other upward in ambition, or spiralling downward. We must make Paris a moment to seize and build on the momentum. A powerful way to do that would be for the entire world, for the first time, to agree to the goal of a decarbonised global economy powered by clean energy. That would send an immediate signal to clean and dirty energy investors everywhere, accelerating the energy transition that is already underway.
Hope is growing, momentum is with us, but we’ve been here before. From the Earth Summit in 1992 to the Kyoto Protocol in 1997, the world has surged forward in the past, only to be knocked back by the toxic politics of the fossil fuel lobby with its junk science and well-funded climate denialism. Each time, the gap between the action we’re taking and the action our survival requires widens. We need a movement that is built to last, built to win and keep winning, over decades to come. 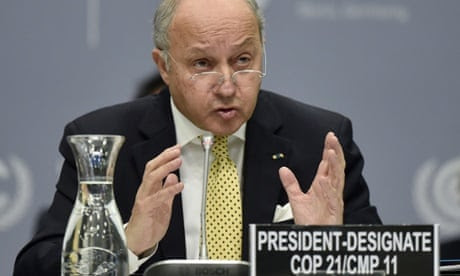 Read more
That’s why, on 29 November, the day before world leaders converge in Paris, people will come together again in the streets for the global People’s Climate March – to break last year’s record for the largest climate change mobilisation in history. In thousands of cities and towns across the planet, we’ll gather or march for our communities and those already at risk from climate change, for the future of our children and grandchildren, and for a safer world powered by clean energy. We’ll show politicians that this is a movement that is here to stay and growing fast. And we’ll inspire others to join this ‘open source’ movement with no gatekeepers, no permissions needed – everyone is invited, not just to participate, but to organise and to lead. Because for the climate revolution to change everything, we need everyone.
On 29 November, we march!

A leading scientist just broke down in tears during an interview on carbon pollution, describing a dark future where the oceans are ruined. Whether her nightmare comes true depends on us.

The biggest climate summit of the decade is just four months away, and our leaders could agree to a revolutionary target to get the world off fossil fuels. It would be a guiding star to navigate away from climate catastrophe, signalling to politicians, boardrooms and stock-markets everywhere that the era of dirty energy is over. Winning won’t be easy -- but if we make leaders feel the power of this movement then we can win.

Last year our community helped create the biggest climate mobilisation in history at the People’s Climate March. Now, on November 29th -- hours before leaders arrive at the Paris climate summit -- it’s time to go even bigger! Click to say “I’m in” for this year’s People’s Climate March and you’ll be the first to find out what’s happening in your local area.

Paris is not our final destination in the struggle to stop climate change, but there’s every reason for hope that it could smash the deadlock. The Pope has just called for real climate action, G7 leaders have already committed to phase out fossil fuels, and the cost of renewables is dropping every single day. And all over the world, the climate movement is winning big, forcing clean energy onto the agenda of national leaders everywhere and moving millions out of fossil fuel investments.

We already have the technology we need to spark the revolution to shift us off our collision course with climate catastrophe. But for decades our leaders have pandered to the interests of powerful fossil fuel companies, and unless they know that people everywhere will fight for their future, there’s a real risk they’ll cave again.

Our 42 million strong movement was built to stop that! Last year’s climate marches put our leaders on notice that a new world was on its way. Now we need a giant march in Paris, together with coordinated marches in major global cities and thousands of smaller solidarity events hosted all over the world to make sure our leaders know we won’t let them put fossil fuel profits before the future of our species. Click below and say you’re in!

Or if you're part of an organisation that's interested in taking part -- click below to let us know if you'd like to partner with Avaaz on making this march magic:

With hope and gratitude,

P.S. - Our founder Ricken Patel just wrote a call to action for the march in the Guardian -- click here to read and share it widely!

Should we have an event here or go to London?