The death of the Public Architects' Department >>> >>> “The danger is things get approved for political reasons if you don’t have a design architect at the top to say, 'That’s rubbish: go back to the drawing board'.”

The design of eco-town Cranbrook has shown a depressing lack of design:
Futures Forum: Cranbrook: where's the 'good design'?

The Public Architect is mainly a twentieth century phenomenon that lasted from the end of the Second World War to the mid-1990s.

Local authorities, development corporations and central government departments all employed their own architects who were also often town planners, to organise the country’s huge post-war building programme. London had an Architect to the Council and Superintending Architect of Metropolitan Buildings from 1889 to 1986 (when the Greater London Council was abolished by Margaret Thatcher). They included Sir Robert Matthew who was responsible for the Royal Festival Hall 1951, Sir Leslie Martin, and Hubert Bennett whose department designed the Brutalist South Bank centre.

The privatisation of routine architectural services is not in itself a bad thing as some of the best architects are found in private practice – architects who are honoured today, like Norman Foster and Richard Rogers. But, without an in-house chief architect, councillors and planning officers have no access to independent advice on architectural design. They rely on the recommendations of town planners who, despite claiming that they are trained in aesthetics, are not as well equipped as a qualified and experienced architect employed by the council.


These days computer-generated images have become very realistic and can easily seduce the lay person. The Library of Birmingham was ‘sold’ to the planning committee, city councillors and the public purely on the basis of CGIs of the outside of the building in its setting in Centenary Square. A senior councillor in charge of regeneration, Councillor Summerfield (Conservative, Harborne) admitted that he had not even seen the floor plans for the new library, yet was happy to approve the design. Councillors leave all the detail to the planning officers who recommend approval or occasionally, rejection, but the final decision is taken by councillors, usually after a cursory discussion.

Was architecture in Birmingham any better when the council employed a City Architect? Owen Hatherley thinks so, going by his comments in A New Kind of Bleak (2012). He writes of the Chamberlain Gardens estate in Ladywood (in my photo, above) designed by AG Sheppard Fidler, that “it feels just, an assertion of the working class population’s collective right to light, air, birdsong and greenery in a city full of wasted land and unchallenged privilege. It’s an approximate Ville Radieuse, in that part of the Corbusian programme – the parkland, the sense of openness and verdure – is fully implemented.”

Hatherley reminds his readers that Sheppard Fidler fell out with Herbert Manzoni because of his insistence that the re-housing of post-war Birmingham would need more time and money than the Council was willing to give him.

Architects in private practice are reluctant to tell the Council what they think of the work of fellow architects especially if they have been hired to demolish and replace it with their own work. They rely too much on the goodwill of the planners and the councillors on the planning committee to put their heads above the parapet when controversy rages. We know that Glenn Howells, the architect for the second office block to replace the Central Library is a Madin fan and lives in a house designed by him, but he can’t express an opinion about the Library (whatever it is) because he is employed by the developer who wants to demolish it.

A few brave architects like Joe Holyoak support the campaign to save the Library but we may never know what the others really think even after the building in question has been safely reduced to a pile of rubble. Do they agree with the late Clive Dutton that it had “no architectural merit” or do they accept the inevitability of ‘progress’?
A good City Architect must act with professional integrity and independence. The Victorian Reference Library was demolished when there was a City Architect in post – Alan Maudsley – who was eventually jailed for corrupt dealings with Bryant the builder. It was left to an independent pressure group, the Victorian Society, to defend the building. The public at large only woke up when it was too late and all that was left were photographs, memories and nostalgia.
The slow death of the Public Architect | The Birmingham Press


Thorp retires from Leeds as last of city architects 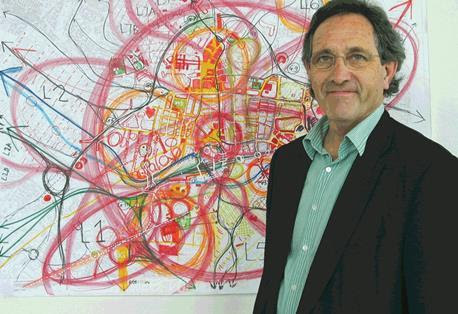 As the seventh holder of the post steps down, the architect’s civic role is over. The man thought to be Britain’s last city architect is to step down after 40 years with the council, and will not be replaced.
John Thorp will retire as Leeds city architect in November, only the seventh and final man to hold the title in more than 100 years. He will stay on part-time till March to bring two key projects to completion: Leeds Arena and the Eastgate retail quarter.
When he joined the council as an architectural assistant in 1970 there was an architects’ department of 400; now the department is no more.
In his four decades Thorp, 68, has done more than any other individual to shape the city, from Millennium Square to the City Museum. Earlier in his career he built 50 schools, four sports centres and worked on the Henry Moore Sculpture Gallery with the sculptor.
“That was a really enriching relationship for someone in my position,” he said. “Like Moore, I was born in this area and the sense of landscape and geology seems to be in the blood. It’s a very strong sense that has run through my work: less of the architecture of buildings and more of landscape and townscape, where buildings become integral to that. Signature buildings are needed but my architecture has been urban dentistry as much as individual buildings.”
More recently he has been a Cabe national and Olympic design review panellist.
Carey Jones director Gordon Carey, who first studied under Thorp 40 years ago before working with him, said Thorp had helped make Leeds great. “John has been fantastic for the city. He is passionate about it – physically and socially – and is responsible for all the good things about it,” he said.
Thorp, who was made an OBE for services to architecture and regeneration six years ago, received an honorary doctorate from Leeds Metropolitan University’s school of architecture and is looking forward to some retirement work there. He is also writing a book on devoting his architectural career to one city.
A Leeds council spokesman said Thorp would not be replaced.

DEATH OF THE ARCHITECTS’ DEPARTMENT

Once a feature of every local authority, architects’ depart-ments were responsible for some of Britain’s finest civic buildings.
With roots in the 1870 Education Act, they were headed by a chief architect whose job was to mediate with the politicians and advise on the quality of private schemes.
The rot set in as lack of money and reorganisations led to their dismantling. Junior architects, engineers and others were lumped together, often under the leadership of someone more familiar with balance sheets than design.
Leslie Morrison, president of the Society of Chief Architects of Local Authorities, said the decline left cities at risk.
“The danger is things get approved for political reasons if you don’t have a design architect at the top to say, ’That’s rubbish; go back to the drawing board’,” he said.
Thorp retires from Leeds as last of city architects | News | Building Design
.
.
.
Posted by Jeremy Woodward at 01:00