Here is the entry from local writer Graham Cooper: 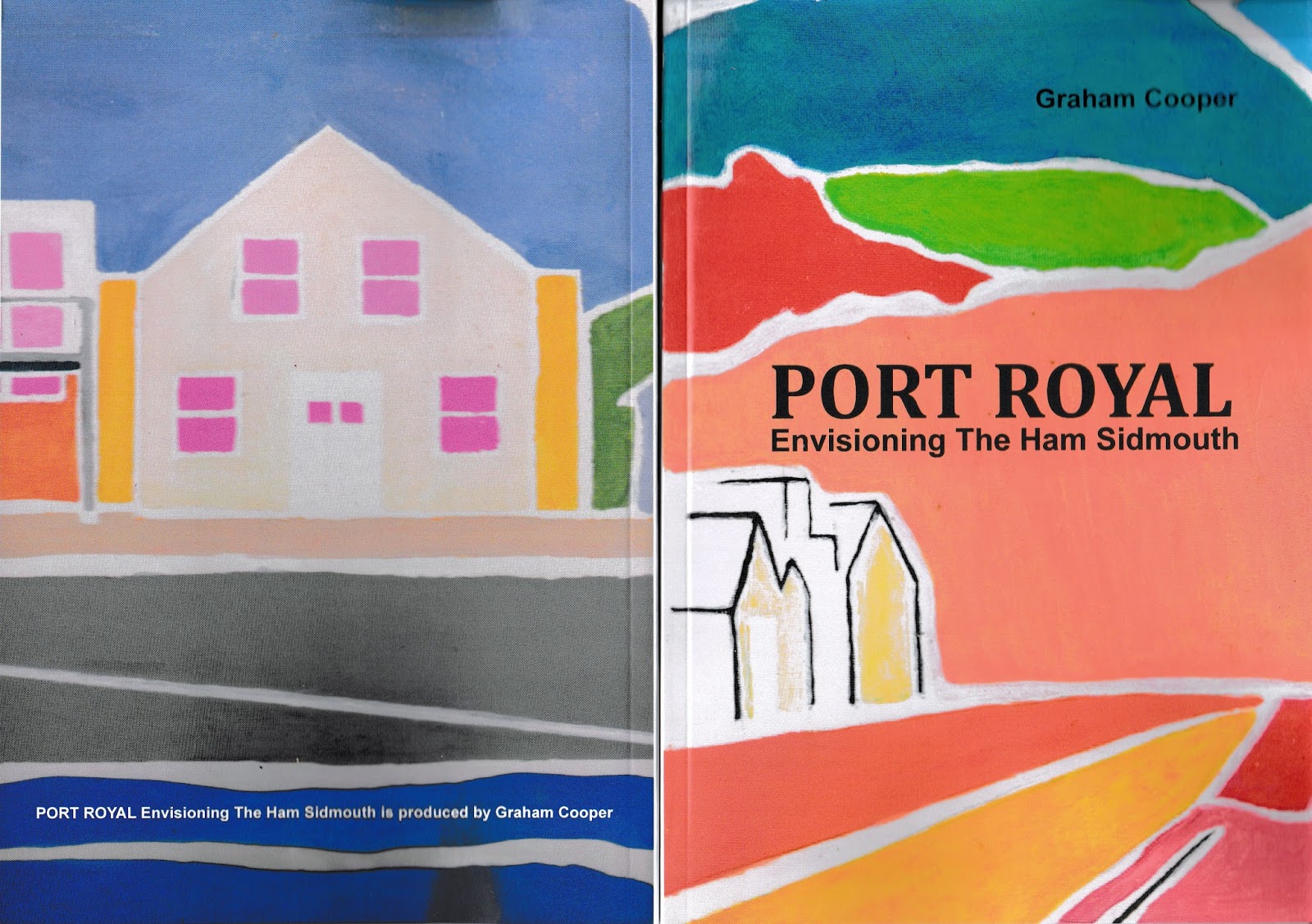 My latest book Port Royal - Envisioning the Ham Sidmouth is produced to coincide with “Reimagining Port Royal” an open architecture competition launched for Eastern Town. It also coincides with the East Devon District Council and Sidmouth Town Council’s own Port Royal “scoping” exercise as well as the emerging Neighbourhood Plan and a Beach Management Plan.

First a word of caution when considering plans for the site:  The Ham Lane area may not be the prettiest part of Sidmouth and was probably at its finest in 1800, when it was originally a flood marsh through which the river Sid drained. The Port Royal has long been associated with the sea and it is the place where the town pokes its toe into the water. Nowadays it may look untidy but its current stakeholders provide well established community recreation amenity which is largely connected with the sea. In respect to the emerging plans, there is a real danger a private redevelopment will wreck this seafaring heritage and deny access to popular shared assets.

Currently the Port Royal and Ham Lane area is an unattractive and unwelcoming part of the town. It was once a lively neighbourhood with fisherman’s cottages and workshop compounds employing many of the Eastern Town inhabitants. Over the years the old cottage dwellings have been cleared to make way for further parking which generates an income for the district council. There has been scarce forward planning and a piecemeal approach has led to a poor layout with wasted space. Now it has become a vacuous and soulless place with sparsely populated terraces of unoccupied holiday properties. As a result, the social amenity at Port Royal has been separated and isolated from the rest of the town by a baron windswept car park. 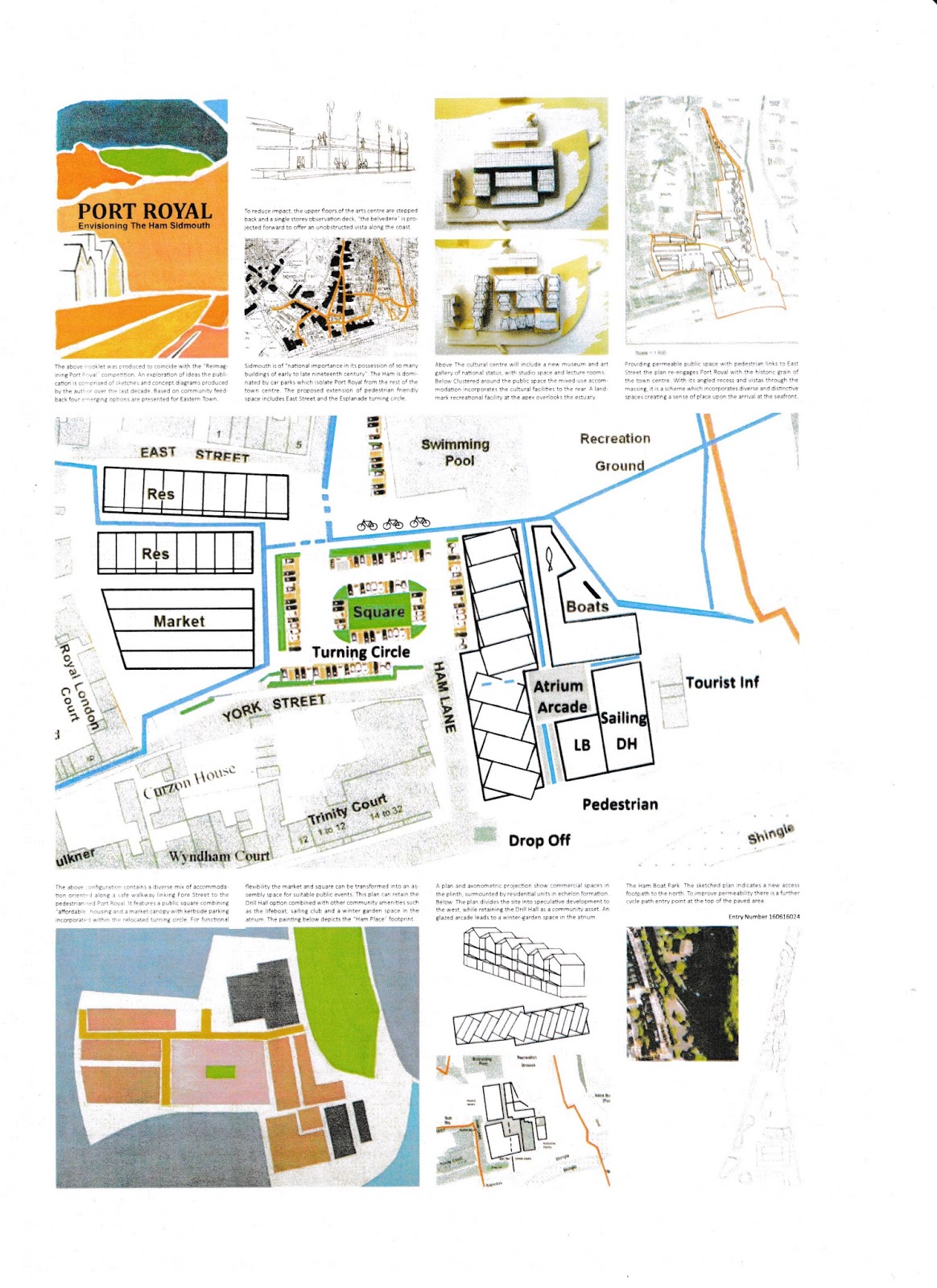 For too many visitors this unpleasant asphalt environment is their one and only stop in the town. Similarly for the SW Coast hikers approaching the dilapidated Alma Bridge, their first impression of Sidmouth is the turning circle, the toilets and a neglected Drill Hall. From the Esplanade along Ham Lane there are multiple junctions dominated by vehicular detritus adding to a confusing experience. Drawing ever more traffic through Fore Street and along the seafront the Ham Lane car parks are clearly in the wrong location and offer a poor introduction to the centre. To attract tourism it is counter-productive to direct guests to the backside of the town, especially when there is a far more inviting gateway at the underused car park in Manor Road, which would help to reduce the impact of vehicles across the resort.

To promote connectivity there ought to be a safe walkway linking the town centre via East Street to a pedestrian friendly eastern Esplanade. Improved access and a relocated turning circle should be resolved alongside the newly designed edifices at the Port Royal site itself. Gathered together in an uncoordinated arrangement most of the existing buildings, with the exception of an impressive vaulted ceiling inside the Drill Hall, are unremarkable. There is however, a strong feeling locally that the facilities in a refreshed Port Royal must remain accessible to the community and not be sold as speculative residential development. The majority of responders indicated a preference for a variety of all weather purposes, such as a flexible performance and exhibition space as part of a sheltered winter garden area with a fish restaurant, café and sea view terrace. For the sake of Sidmouth’s future as a quality tourist destination, it is hoped the council’s scoping initiative and the successful competition entries are able to address and accommodate the above concerns, and the wishes of the local residents, in their proposals.