This had been recommended by their own planning officers:
Futures Forum: Knowle relocation project: planning application to be considered by District Council: Tuesday 6th December >>> planning officers dismiss the need for affordable housing, their own Local Plan, and similar PegasusLife applications which have been refused

Even though the proposals went against the District Council's own planning policies:
Futures Forum: Knowle relocation project: planning application to be considered by District Council: Tuesday 6th December >>> “What is the point of a Local Plan?”

Here is the full piece from the Express & Echo: 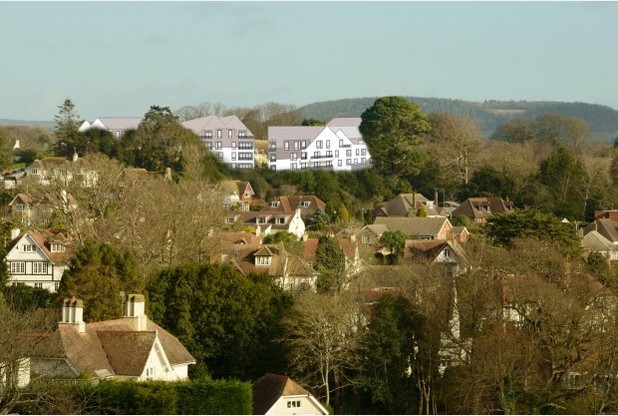 An artist's impression showing the proposed PegasusLife development at the Knowle

Controversial plans to build 113 apartments for older people on the site of East Devon District Council’s offices at Knowle in Sidmouth have been dramatically rejected by the authority’s Development Management Committee.

The decision could throw into jeopardy the council’s planned relocation to new offices in Honiton and Exmouth Town Hall.

To finance the move, East Devon District Council had agreed to sell its Knowle headquarters to Pegasus Life Ltd, which specialises in providing living and care facilities for older people. The sale was subject to a successful planning application.

The council decided to relocate its headquarters in March last year. It plans to move out of its current premises in Sidmouth to purpose built offices in Honiton and to Exmouth Town Hall, which will be refurbished.The relocation to Exmouth is due to take place during the latter part of next year, with relocation to the new purpose built offices in Honiton to follow by spring 2018.

But it is not yet clear how the planning committee’s decision will affect these plans.

The planning application by PegasusLife for a 113-apartment assisted living community for older people was refused by the committee by seven votes to six at a meeting on Tuesday, December 6.

Local campaigners and Save Britain’s Heritage had objected to plans to demolish the 19th-century council offices and build on the Knowle Park.

Liz Fuller, buildings at risk officer for Save Britain’s Heritage, said: “The Knowle is an important local landmark building in Sidmouth standing in attractive landscaped grounds. In our view, the loss of the Knowle and the additional development of the park’s upper lawns and car park as proposed represent a devastating blow to the history and character of Sidmouth, a remarkably well-preserved Regency town in a beautiful setting on the Jurassic coast.

“The long-term benefits of retaining this building should be properly considered as it would serve to secure an important local landmark. The Knowle, which dates back to 1810, has played an important part in the history of Sidmouth and the lives of its residents and visitors.”

She argued that the proposed development would result in “clear over-development of the site”.

Pegasus Life said its plans would help to meet Sidmouth’s housing need. The company had reduced the amount of proposed accommodation in response to comments from local residents.

The application was refused on the grounds that it was an overdevelopment of the site which would impact on neighbours and the character of the area; that the proposed development should be a C3 use and include affordable housing and not a C2 use, and that it impacts on the setting of an historic building.

A council spokeswoman said she was unable to comment on what the decision means for the planned office move. It is understood the authority will wait to learn whether PegasusLife decides to appeal against the decision.