On the River Otter: the beavers are back!

Meanwhile, more studies are being carried out:
Futures Forum: On the River Otter: studying the impact of beavers

Following the storms earlier this year which flooded out the beaver family, a new member has just been photographed: 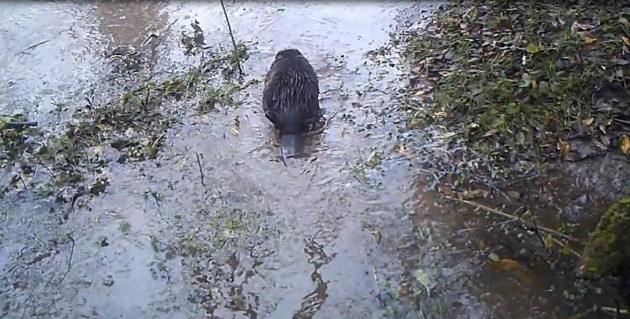 Baby beaver on River Otter near Ottery St Mary Photo: TOM BUCKLEY
Footage of newborn kit is first proof the family has bred this year
Newborn baby beavers pictured on the River Otter are proof that England’s only wild colony is still thriving in a spot near Ottery St Mary.
Photographer Tom Buckley captured footage of a tiny kit paddling in waters after the animals were flooded out of their home in the midst of Storm Angus a few weeks ago.
He says the photo reveals that the family bred again this year and puts an end to questions over whether the beavers still inhabit a stretch of river near the town.
The discovery of the colony in February 2014 was the first time that breeding beavers were known to be living in the English countryside for as long as 400 years. A campaign to allow them to be re-released onto the River Otter sparked national interest. Devon Wildlife Trust (DWT) is now leading the ‘groundbreaking’ River Otter Beaver Project to monitor the creatures and their impact on the natural environment.
Tom said: “Prior to this recent sighting, it was not known if the Ottery wild beaver family had any young this year. But, with their home flooded, the family had no option but to evacuate it and wait for the flood water level to drop before they could get back to safety. I caught a newborn on camera paddling about.”
He added that the beavers are usually only spotted at night, but were forced out during the day on this occasion.
DWT’s Steve Hussey said: “The recent sighting of beaver kits on the River Otter is good news. We think the youngsters are part of a family which are living close to Ottery. The mother had not been seen for some months and we were unsure as to whether she had managed to breed successfully this year, so the sighting is doubly reassuring.
“We now think there are around 20 beavers living wild on the River Otter. They’ve proved very popular with local people and visitors. Last summer, another family group close to Otterton attracted hundreds of wildlife watchers. The beavers have also attracted a great deal of national and local media attention.”
When the five-year River Otter Beaver Trial ends in 2020, its evidence will be considered by the Government, which will then make a decision on the animals’ future.
DWT is urgently seeking funds to cover the cost of the trial as the charity receives no government backing to carry out the wild beaver work.
Visit www.supportdevonsbeavers.org

There are many ways to back the project:
Support Devon's Beavers – The Beavers are Back!
.
.
.
Posted by Jeremy Woodward at 06:25