The impact of grey squirrels on East Devon's woodland

The Arboretum's big event last Friday was a mix of information and entertainment:
Futures Forum: A Celebration of the Sid Valley’s Trees >>> Protect - Improve - Expand!!

In the opening talk, John Wilding MBE, Head of Forestry and Environment at Clinton Devon Estates looked at the impact of grey squirrels on our woodlands.

This creature is bad news for deciduous forest - both in the Sid Valley and beyond: 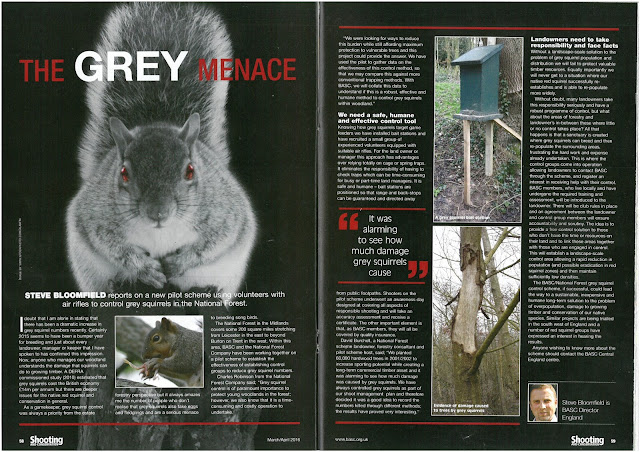 Meanwhile in East Devon, Clinton Devon Estates are currently working with the European Squirrel Initiative (ESI) and the British Association for Shooting and Conservation (BASC - see above article) on control trials locally in an attempt to break the status quo of ineffective control and inevitable loss of native broad-leaved trees:

European Squirrel Initiative
The British Association for Shooting and Conservation

As a detailed source of advice, the UK Squirrel Accord is a good place to start:

Long term vision for the future

Our native red squirrel populations are secure and have expanded beyond their current strongholds. Our woodlands are flourishing and can continue to deliver multiple benefits for future generations

The UK Squirrel Accord consists of 32 leading woodland, timber industry and conservation organisations in the UK. It was created at the invitation of HRH Prince Charles – who had the aim of bringing a concerted and coordinated approach to securing the future of our red squirrels and woodlands, and to controlling the introduced grey squirrel.

Grey squirrels need controlling because they are causing major economic, social and environmental damage to the broadleaved woodlands of the United Kingdom.

The grey squirrel (Sciurus carolinensis) was introduced to the UK from North America in 1876 and its population has grown rapidly since then.

The problem of grey squirrels was first recognised in 1930 when a law was passed making it illegal to release a grey squirrel into the wild. Today it is estimated that could be as many as 3 million grey squirrels in the UK and this number continues to grow.

Forest damage and the impact on the UK’s woodland industry

Grey squirrels damage our forests by stripping bark from trees’ main trunks (at the base and up in the canopy) and branches. When they strip a complete ring of bark around the tree, it will kill the tree.

The Forestry Commission is also a good place to go for information:

Our gray squirrel policy and action plan reaffirms government’s commitment to work with land owners and other organisations as part of a reinforced package of measures to support targeted grey squirrel control to protect both red squirrels and woodlands.

The action plan includes:
> Additional measure in forestry options of Countryside Stewardship for land managers to control grey squirrels (not just in red squirrel areas but in woodlands where squirrels are a threat to management plan objectives)
> Plans for a national squirrel partnership to help local groups outside of grant schemes
> Support for research and evidence (for example squirrel pox vaccine and fertility control work)
> Taking action on its land holding (public forest estate)

Report on the evidence consultation response


See also:
What is the future of the red squirrel? - Shooting UK
How to use trapping and shooting techniques to control squirrels - Shooting UK
.
.
.
Posted by Jeremy Woodward at 14:46