The future of Sidmouth's hospital: “We need to define how many patients could be cared for in community hospitals.”

Meanwhile, in Ottery, the public and councillors are getting very gittery about the future:
‘People are frightened to get old due to NHS cuts’ - News - Sidmouth Herald

The District Council are non too pleased:
Futures Forum: The future of East Devon's hospitals: getting the figures right

Much of the argument is around the parallel future of care:
Futures Forum: The future of Devon's care services: "We want to see comparative clinical evidence that demonstrates that the proposals for treatment at home are indeed both as effective as hospital treatment and as safe."

Back in Sidmouth, the Town Hall has voiced its opposition to the proposed cuts - and questioned the current state of care in the community:


‘Beds should be retained in Sidmouth, Seaton and Exmouth’ 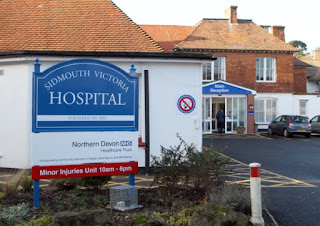 Sidmouth Victoria Hospital Ref shs 3264-50-14AW. Picture: Alex Walton.
Civic leaders have backed calls for Sidmouth, Seaton and Exmouth to each retain 16 community hospital beds – rather than any one community losing out entirely.

Sidmouth Town Council this week expressed its ‘100 per cent’ opposition to the NEW Devon Clinical Commissioning Group’s proposals. Members said the new model of care – focusing on treating people in their own homes – was ‘dangerous’ and lacked a firm evidence base.
They backed an alternative proposal from Sidmouth Victoria Hospital Comforts Fund chairman Graham Vincent, who said at Monday’s meeting: “Sidmouth hospital is not NHS funded. There’s no private finance initiative (PFI). Its redevelopment cost us £5million and we don’t owe a penny.”
In contrast, Tiverton’s hospital was paid for by a PFI – essentially a loan from the private sector to fund capital expenditure – with a contract that the CCG cannot afford to leave, he added.
Mr Vincent said: “Had we gone down the Tiverton route with PFI, would our beds have been safe? I don’t want to criticise other hospitals, but I am in the business of talking up the strengths of Sidmouth.”
The CCG’s preferred option, A, would see Sidmouth lose all of its inpatient beds, with 32 kept in Tiverton, 16 in Exmouth and 24 in Seaton.
The PFI means the CCG has to keep Tiverton in the options, but Mr Vincent said it should retain 24 beds and Sidmouth, Seaton and Exmouth should each get 16.
The meeting also heard from CCG representative Dr Jim Forrer, who said: “I’m no evangelist – I genuinely believe that if there was decent, home-based care, people would do better.”
Councillor David Barratt said that was ‘a big if’.
Dr Forrer said not all of his colleagues were convinced by the proposed home-based model, although they do recognise the pitfalls of being in hospital, such as exposure to infections, confusion caused by an unfamiliar environment and institutionalisation.
Sidmouth GP Dr Mike Slot challenged a claim that 600 people are in hospital beds who do not need to be there – saying the figure does not differentiate between community and acute beds.
“We need to define how many patients could be cared for in community hospitals,” said Dr Slot. “That piece of work has not been done. I think it’s really quite perilous to close beds before we know how many we need.”
Dr Slot said it may be that the more costly acute beds should be cut instead.
The CCG is currently consulting on its proposals.
Councillors voted to express their opposition to bed closures in Sidmouth and their support for Mr Vincent’s alternative proposal.

‘Beds should be retained in Sidmouth, Seaton and Exmouth’ - News - Sidmouth Herald
.
.
.
Posted by Jeremy Woodward at 13:25