Climate change: the future of the Paris Agreement

Although commentators from across the spectrum are saying that if the US pulls out, that might not be such a bad thing:
Paris accord may be stronger without Trump - Financial Times
Donald Trump right to be sceptical of Paris climate agreement - The Australian

Today's Independent gives us a view of a divided administration:

A meeting of Donald Trump’s advisors to discuss whether to withdraw the US from the Paris Agreement on climate change has been postponed for a second time.
The President’s influential daughter, Ivanka Trump, who is the Assistant to the President, Defence Secretary James Mattis and former Exxon boss Rex Tillerson, now Secretary of State, are all believed to be in favour of the US remaining a signatory.
Scott Pruitt, head of the Environmental Protection Agency, and White House Chief Strategist Steve Bannon are thought to be arguing for withdrawal.

The administration has said it expects to make an announcement by the end of May.
Meanwhile, the United Nations has been continuing to hold international meetings about climate change with the latest currently underway in Bonn, Germany.
The US has sent just seven officials – three fewer than the small Central American state of Belize.
A previous scheduled administration meeting about the Paris Agreement was cancelled at short notice last month and the White House confirmed one planned to take place on Tuesday had also been postponed. It did not say when the meeting would be held. 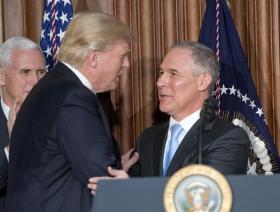 EPA dismisses climate scientists 'to replace them with industry reps'

A new survey by the Yale Program on Climate Change Communication found nearly 70 per cent of people in the US support remaining a signatory of the Paris Agreement.
Commenting on the survey, John Coequyt, global climate policy director of environmental group the Sierra Club, said: “It should never have been a question of if the US should stay in the Paris Agreement, as it is clear that the American people and the world will accept nothing less than the US delivering on its international climate commitments in full.
“It's high time Trump stops putting the misguided demands of the extremists in his inner circle above those of the vast majority of the American people, and if he is serious about protecting our national security and strengthening the US’s global leadership role, supporting the Paris Agreement is the first step."

The campaign group Avaaz has set up an on-line petition:
Avaaz - UK and G7: Save the Paris climate deal
.
.
.
Posted by Jeremy Woodward at 02:51