There were real concerns for the habitats and wildlife on the common: 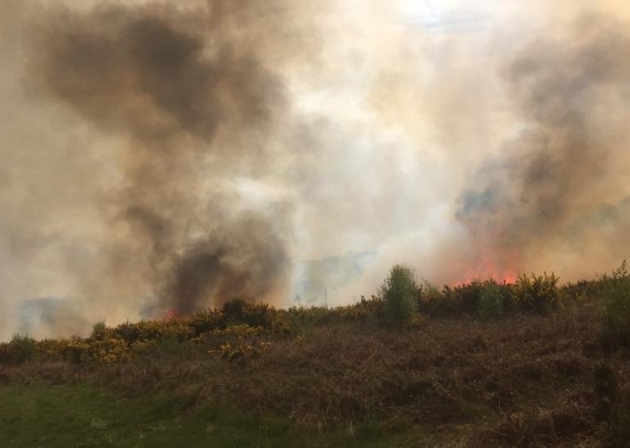 Wildlife rangers are today starting to assess the impact of the major fire on Woodbury Common, the site of which includes a significant conservation area.

The East Devon Pebblebed Heaths have both UK and European designations, including Site of Scientific Interest, Special Protection Area and Special Area of Conservation.

Dr Sam Bridgewater, head of wildlife and conservation for Clinton Devon Estates, has this morning answered questions about the impact of the fire, which covered an area of around 50 hectares, or 124 acres.
What kind of wildlife has been killed or made homeless by the fire?
“We have recently recorded around 3000 different species of wildlife on the East Devon Pebblebed Heaths including, animals, insects, reptiles, birds and plants. We hope that most of the birds will have survived the fire simply by the fact they can fly away.
“At this time of year the nightjars, ground nesting birds, will be building their nests, so it’s a particularly bad time of year for the fire to happen. Reptiles, particularly adders will have been the most vulnerable.”
Are there particular concerns about the Dartford warbler?
“The East Devon Pebblebed Heaths are one of the few places in the UK that the Dartford warbler can be found. They are dependent on mature dry heath habitats and particularly on gorse that is in good condition.
“Numbers of this species have gradually increased after a significant population crash in 2010 due to very cold weather. The last big fire on the commons was in 2010 but this is not believed to be responsible for the decline in numbers.
“Fortunately, this is not the part of the common where most of the Dartford warblers have been sighted. Nevertheless we will be working with our volunteers to monitor numbers.”
How quickly do you expect the area - and the habitats - to recover?
“Since the last big fire in 2010 – nearly 100 hectares - it has taken nearly seven years for the landscape and habitats to fully recover. We will expect to see grass shoots emerge pretty quickly and after about a year the gorse will begin to grow.
“In two years, the heather will recover. It will look quite different for a while and the habitats won’t fully recover for about 10 years.”
Why is the impact of yesterday’s fire so much greater than the controlled burning that’s carried out on heathland at other times of year?
“Controlled burning of no more than half a hectare is carried out between November and March in a mosaic fashion to manage the heathland and ‘reset the successional clock’. Our focus is normally on the 30 year heathland, but rather than killing it, we burn it to allow new heather and gorse to grow.”
What will your team be doing today?
“We will be assessing the site and mapping the areas of damage onto our system. A regular programme of wildlife monitoring will begin. We will also be having a full debrief with the fire service.”
Is there anything that the public can do over the next few months to monitor the situation or prevent this kind of event from happening again?
“During very dry weather periods such as the one we are currently experiencing, we are asking people to be very vigilant. It’s particularly important that there cigarettes are disposed of responsibly and that there are no camp fires.”
Dr Bridgewater added that he would like to thank Devon and Somerset Fire Service, the East Devon Pebblebed Heaths Wardens and the RSPB for working closely according to the ‘fire attack plan’ to bring the fire under control and ensure the safety of the public.

Since then, warnings were given about preventing fires on the heathland:
Warning issued over risks fire poses to Devon's treasured landscapes | Devon Live

The pebblebed heaths are very important.

Clinton Devon Estates owns most of the land: 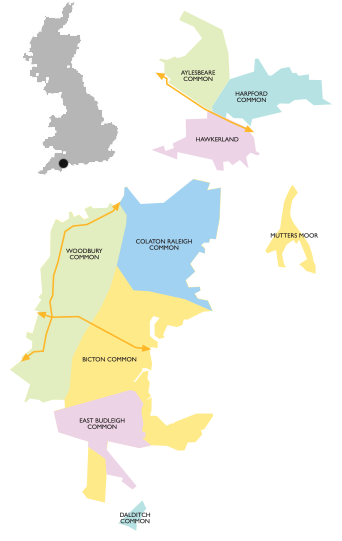 And CDE have established a trust - and there's a lot more excellent information to be had:
East Devon Pebblebed Heaths Trust - Clinton Devon Estates

Meanwhile, nature conservancy bodies have expressed concerns about how Brexit will affect the heaths:
Futures Forum: Brexit: and whether it spells disaster for Devon wildlife
.
.
.
Posted by Jeremy Woodward at 01:30