We need to reduce the amount of rubbish we produce:
Futures Forum: What's your plastic footprint? ... What's your nerdle count?

The trial in Exmouth with the new recycling system has done very well:
Futures Forum: Recycling and refuse in East Devon >>> collecting more to recycle more >>> rolling out in Exmouth

As of 12th June, it hits the rest of the District: 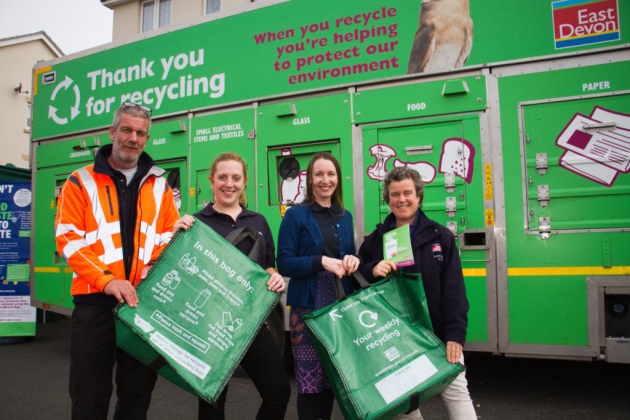 Around 51,000 households will soon be receiving details of East Devon’s new recycling and waste collection service.

The district council has already rolled it out in Exmouth and now plans to introduce it across the area from mid-June.
It says that because the extended service means more items – like cardboard - can be recycled, the grey bin bulky household waste collections will be every three weeks instead of fortnightly as at present.
Letters are being sent to residents detailing the new recycling service, which starts on Monday, June 12.
Cardboard, plastics, cartons and small electrical items will be added to weekly recycling collections.
EDDC says the extended recycling service is in response to residents’ requests. Most households will be given an additional 75 litre reusable sturdy sack with a Velcro seal in which to collect their extra recyclables. These will be delivered by the council’s contractors SUEZ in May/June. Some properties, such as flats, may receive an additional recycling box instead of a sack, where storage is a problem.
Cllr Paul Diviani, EDDC leader, said: “We are delighted with how well the service is operating in Exmouth and it’s now the right time for the rest of our residents to be able to recycle more items.
“The council is determined to offer residents a more sustainable method of recycling and waste collection that benefits the environment, helps our residents do the right thing by recycling more and is financially sustainable.”
For more about the new service, visit – www.eastdevon.gov.uk/onboard