There was a bit of a discussion in Charlevoix over the weekend:

European leaders, Japan and Canada back carbon pricing and a “just transition” to clean energy at G7 summit in Charlevoix, as Trump refuses to engage 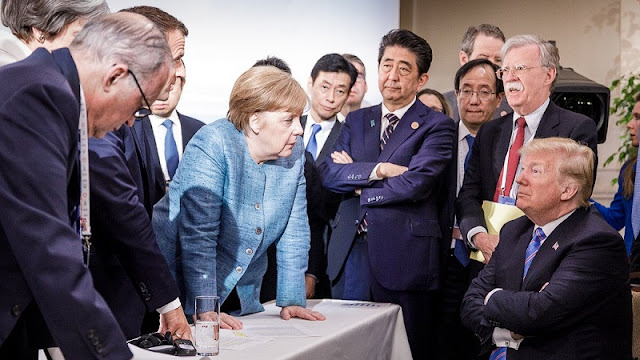 A meeting of G7 leaders in Canada ended with a split over climate change on Saturday.

Canada, France, Germany, Italy, Japan, the UK and the EU agreed new language on the importance of carbon pricing and a “just transition” to clean energy, as well as reaffirming their commitment to the Paris Agreement.

The US asserted its position in a separate paragraph, prioritising economic growth and energy security. It would support countries in using “all available energy sources”, including to “access and use fossil fuels more cleanly and efficiently,” the statement said.

On the biggest source of friction at the summit, trade, the leaders arrived at a consensus position – only for president Donald Trump to retract US endorsement after leaving the meeting.

Trump refused to even attend a scheduled session on climate change, leaving the G6 to advance the agenda without him. It contrasts with last year’s summit in Italy, which resulted in a minimalist outcome as leaders held out hope of winning Trump round.

“On the climate, we have an ambitious position at 6, without the United States. This is not new,” French president Emmanuel Macron tweeted.

Meanwhile, US companies are taking a very different direction:

The world’s biggest companies are increasingly worried about climate change.

The terms “climate” and “weather” combined were among the most frequently discussed topics among executives of Standard & Poor’s 500 companies, beating “Trump,” “the dollar,” “oil” and “recession” according to analysis of 10 years of earnings call transcripts by S&P Global Ratings. 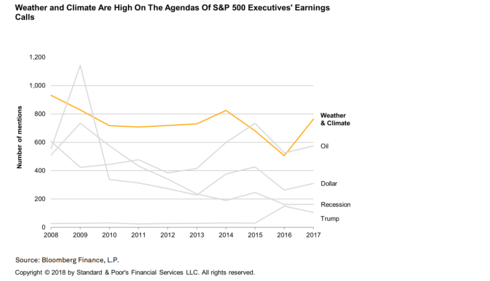 The analysis shows that 15 percent of S&P 500 companies publicly disclosed an effect on earnings from weather events, with only 4 percent quantifying the effect. The average impact on earnings was 6 percent in financial year 2017.

In other words, in the United States, the climate change issue is being de-politicized:
In the US, some Republican mayors are secretly fighting climate change | CityMetric

And things started to move a year ago:
Taking Politics Out of Climate Change — NOVA Next | PBS

On the other hand, we still need debate:
We'll never tackle climate change if academics keep the focus on consensus | Warren Pearce | Science | The Guardian

Which is helped by simply wanting to know:
Arousing Curiosity May Help Take the Politics Out of Science | Psychology Today


However, ultimately the decisions we will have to make over climate change are fundamentally political:

The pitfalls of generational thinking

The recasting of climate change as a problem of the present rather than the future would be a positive step. This is arguably the simplest way to contend with the pitfalls of generational thinking.

The lure of channeling ethics through the family, and of overlooking some meaningful political and economic divisions, is thereby removed at source.

As in other fields, taking collective action requires that we avoid privatising and depoliticising the problems we seek to solve.

The pitfalls of generational thinking | openDemocracy
.
.
.
Posted by Jeremy Woodward at 12:45