Horse Chestnut canker in the Byes and at Knowle

Our horse-chestnuts are struggling - as reported this time last year:
Futures Forum: Horse Chestnut canker in the Sid Valley

And it's not getting any better:


Horse chestnuts under threat from pests and diseases

Ed Dolphin, of Sidmouth Arboretum, takes a look at the challenges faced by Sidmouth’s horse chestnuts. 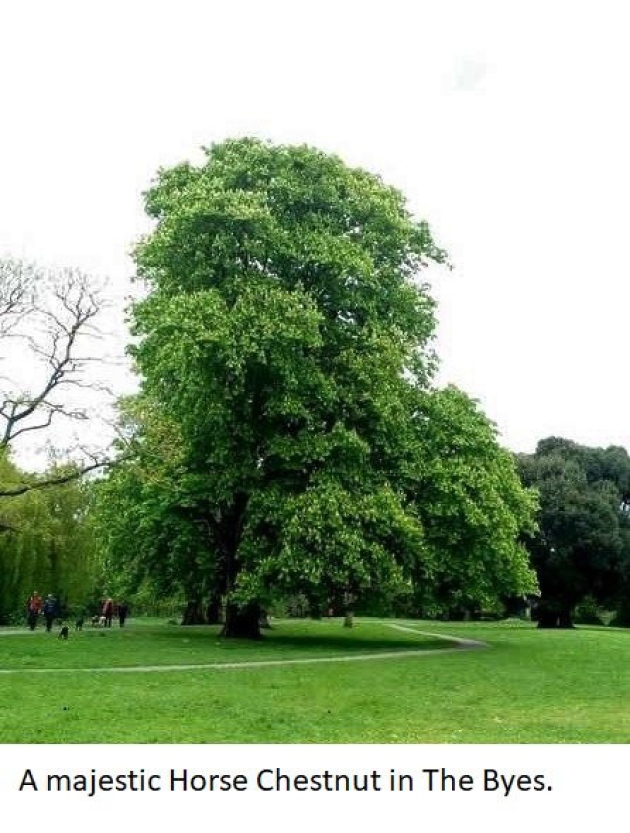 Horse chestnut in the Byes
There could be nothing more English than a game of conkers under the boughs of a magnificent horse chestnut tree, or so you might think.
Although the game of conkers is a uniquely British thing, the horse chestnut (Aesculus hippocastanum) is not a native tree, it originated in the Balkan Peninsula.
In 1576, physician and botanist Karl Clusius acquired some conkers from the Sultan of Turkey and planted them in the court garden in Vienna.
They were a popular addition and soon all the great gardens and parks of Northern Europe had horse chestnuts growing. 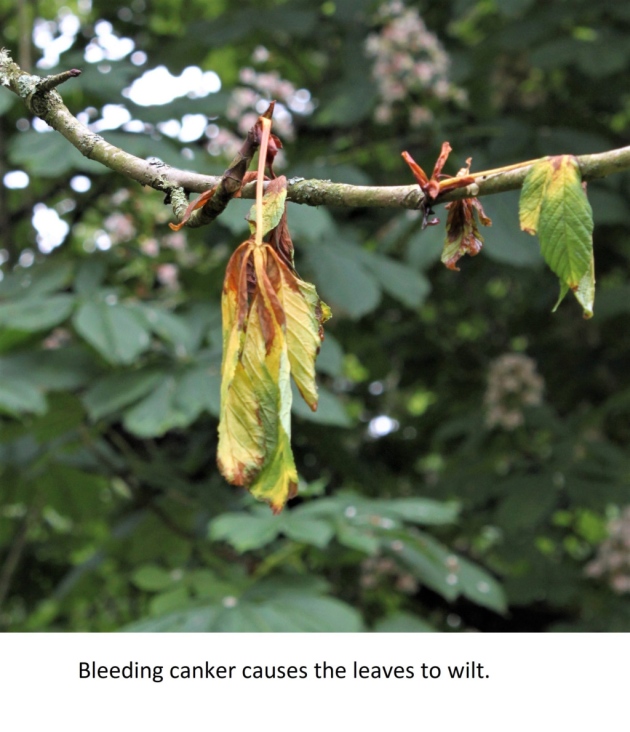 Aesculus wilt
Horse chestnuts thrive in a wide range of growing conditions and the Forestry Commission estimates that there are nearly half a million in the UK, mostly in parks and along roadsides.
In Sidmouth, there are fine examples in The Byes and Knowle, and along Station Road.
A full-grown tree is a magnificent sight, but a closer look can be just as rewarding.
The large sticky buds open to claw-like young leaves. The leaves open to the characteristic fans of five to seven leaflets on each stalk or petiole. 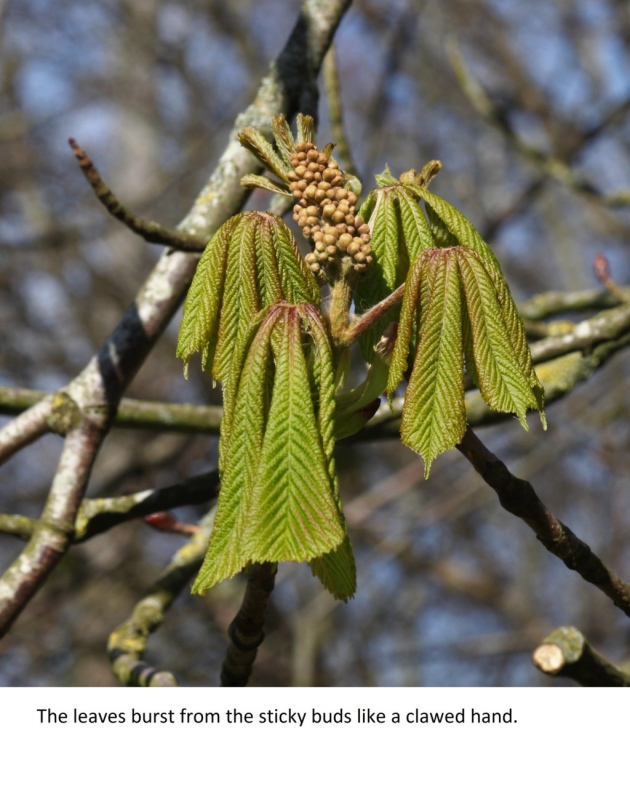 Aesculus leaves
The nectar and pollen from the candlesticks of white and pink flowers are a great source of food for many insects. When ripe, the spiky green balls of the fruit fall to the ground and split open to reveal the seeds – the conkers. At first they are a creamy white, but exposure to air triggers the chemical reaction that forms the rich brown skin.
Sadly, horse chestnuts are under threat, leaf miner moths are reducing the trees’ vigour but, more seriously, a disease called bleeding canker is killing these graceful giants.
The leaf miner moth is an exotic species that made its way to England in 2002 and has spread rapidly. The adult moth lays eggs on the horse chestnut leaves and, when the tiny caterpillars hatch, they eat their way into the leaves.
They create tunnels as they feed on the internal tissues and this causes brown scarring of the leaf. The trees seem to be able to cope with all this unless they are stressed by poor weather or other diseases such as bleeding canker. 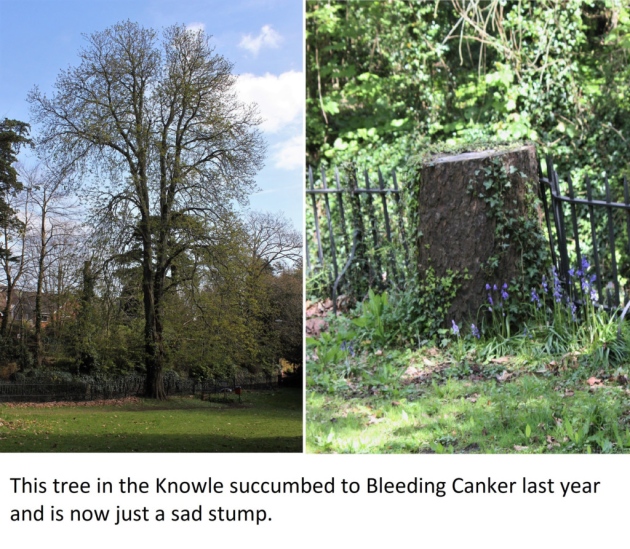 Horse chetnut Knowle canker
If a tree has bleeding canker, its bark splits open and it weeps a black or dark brown liquid as if the tree is bleeding. A particularly virulent form of the disease caused by a Pseudomonas bacterium has spread rapidly across England in the last 20 years.
Trees in good growing conditions can survive but, if the tree is debilitated by pests such as the leaf miner, the cracks in the bark become too extensive and it can kill the tree. Even if the tree survives, individual boughs can die back and then break off, so large trees need regular surveys for public safety.
Last year, one the hundred-foot horse chestnuts inside the fence of the Knowle parkland wilted suddenly and there were characteristic cracks in the bark weeping black. The tree couldn’t be saved and is now a four-foot tall stump.
Another tree, further up Station Road is also infected. It will be a terrible loss to the town if the remaining dozen mature trees in the park are lost.

Horse chestnuts under threat from pests and diseases | Sidmouth and Ottery breaking news and sport - Sidmouth Herald
.
.
.
Posted by Jeremy Woodward at 07:42