We have wolves in Devon:
Futures Forum: Reintroducing wolves to Devon

There are still many questions around the issue of 'rewilding':
Futures Forum: Rewilding Britain >>> " a bio-engineered pastiche", or >>> "a feat of natural renewal"?

The University of Sussex looks at the science and practice of reintroducing wolves on a large scale: 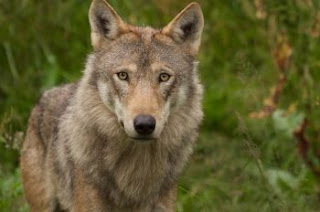 Research, led by the University of Sussex and the University of Kent, indicates that for
wolves to be effective at directly reducing red deer numbers and allowing nature to recover in the Scottish Highlands they may need to be reintroduced to very large fenced reserve.
A fenced area, which would also help limit encounters with residents, farmers and workers in the Scottish Highlands, would give the reintroduced grey wolf the opportunity to achieve the high population densities (e.g. 80 wolves per 1,000 km2) required to directly reduce the very high red deer numbers that are currently create an over-grazing problem in the Highlands.The current high red deer densities (up to 40 deer/km2) are preventing tree regeneration and ecosystem restoration in parts of Scotland, with more than one-third of all native woodlands in an unfavourable condition because of herbivore impacts.Dr Christopher Sandom, lecturer in biology at the University of Sussex with a particular interest in rewilding, said: “Reintroducing the wolf has long been suggested as part of the solution to large red deer populations, but there will always be concerns about how wolves interact with people in any rewilding project like this. This research shows that they could actually have an extremely beneficial impact in terms of making the rewilding process more effective.”
The research, which also involved scientists from Aarhus University and the University of Oxford (WildCRU), tackled the question of how many wolves would be needed in an area to bring down the number of red deer to allow ecological restoration. The results are published this week in Restoration Ecology.
The team’s analyses show that a barrier capable of retaining 75% of dispersing wolves within the reserve would be optimum in allowing for rapid wolf population growth that could lead to reduced deer numbers without the risk of having so many wolves that the red deer population would be threatened.To understand the likely dispersal behaviour of wolves, the researchers drew on examples from around the world, which reveal that young wolves who leave a protected area often find it difficult to establish a new territory.In Finland, all wolves leaving an expanding wolf population into a reindeer management area were shot before being able to reproduce, while in the Białowieża National Park in Poland, surrounding human activity has created a barrier to wolf movement patterns. Biologists found that the wolf population of Riding Mountain National Park in Canada had limited interbreeding with other wolf populations in nearby protected areas and no successful wolf dispersal from the park had been recorded over several multi-year tracking studies over 40 years.
Dr Sandom said: “Fences are a common but unpopular tool in biodiversity conservation and would ideally be avoided. But where there are conflicting interests, compromise is needed. Fences particularly constrain animal dispersal but as Britain is an island, this is less of a problem. A fenced reserve in Scotland could be a fantastic opportunity to return large predators to Britain, ecologically restore a large part of the Scottish Highlands, and promote tourism.”
The paper states that a reintroduction of grey wolves, also known as timber wolves, to Scotland is likely to be of relatively small benefit to the conservation of the species, which are classified as of least concern in terms of extinction by the International Union for Conservation of Nature (IUCN). However, it could have important ecosystem level effects by instigating a significant trickle down impact on species below them in the food chain. It could also have a major effect of wildlife-based tourism, and associated job creation.
Dr Joseph Bull, lecturer in conservation science at the University of Kent, said: “Wolves are glorious animals, and were originally natives of these shores. The idea of them returning will be thrilling for many people. However, the contribution that would make to global wolf conservation would be small – the larger ecological benefit of bringing them back would be the effect on other native species.”
Professor David Macdonald, Director of WildCRU and co-author of the study, said: “Scotland can lead Europe in thinking about how conservation, large fenced reserves and tourism can reframe rural economies. The role of fencing in the conservation of big predators is globally a hot topic. So far our results are just simulations made from the safety of a desk, but they offer a highly original way of thinking about restoring nature and natural processes.”
The authors note that the reserve would require human management to help mitigate risks such as inbreeding depleting the health of the wolf packs, as has happened catastrophically to the wolves on Isle Royale in the US, while the construction of the fence would require very careful management to minimise potential negative impacts on birds in flight and the movement of non-target species.
Dr Bull thinks the next step is to take the rewilding proposals out of computer simulations and into the wild. He said: “While our model offers insights into what is likely to happen, the crucial next step would be to test these ideas in practice – by creating a reserve, reintroducing wolves, and closely monitoring the system. More generally and perhaps counterintuitively, barriers in some form might have a more important role to play in establishing modern wild areas than previously thought."

Large fenced reserves an effective way to bring wolves back to Scotland : News : University of Sussex
F&FF - Technical and Business Information
.
.
.
Posted by Jeremy Woodward at 15:26