Comparison has been made between the proposed relocation of East Devon headquarters and the plans from West Dorset:
What does the move mean for you? | Sidmouth Independent News
EDDC relocation plan….reminder of a warning from SOS | Save Our Sidmouth

This leaflet from West Dorset: 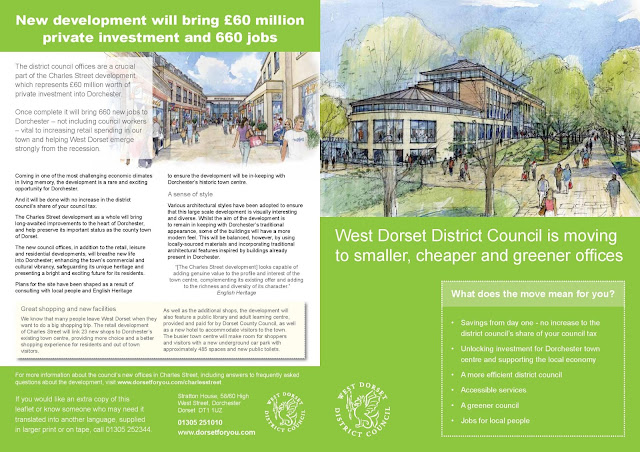 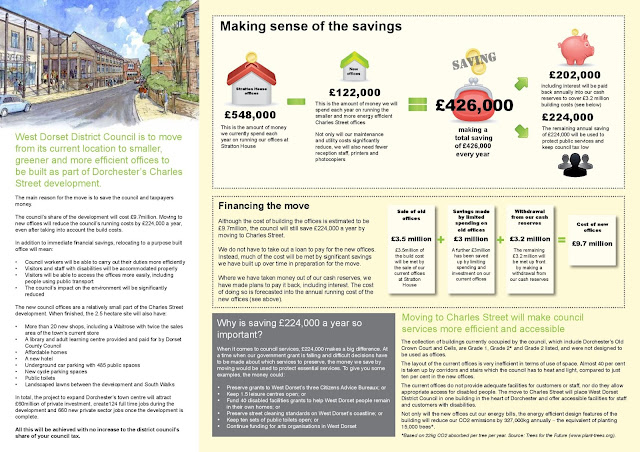 ... is very similar to this, just out, from East Devon:

And here is a report from West Dorset from last October where Councillors voiced concerns about relocating their headquarters:


WEST DORSET: District council may have to make changes to salvage plans

SAVINGS and changes may have to be made to the second phase of West Dorset District Council’s Charles Street redevelopment to salvage the project.

The news comes after it was revealed that the district council has only been offered just over £1million for its Stratton House offices and associated buildings – almost £2.5 million less than the minimum figure it hoped to achieve.

Money from the sale of the building was to have been used towards its new £16m offices now nearing completion in Charles Street – and to attract new businesses to phase two of the Charles Street development.

The low offer scuppers the council’s promises of achieving the savings it hoped to make and could leave the authority with two town centre offices in Dorchester – one of them empty. It could also mean the authority having to dip into its reserves to make up the £2m-plus shortfall.

“Dorchester councillors said all along that there was no way that the old council offices were worth £3.5 million or anything like it,” said Dorchester councillor Andy Canning.
“The whole financial case that the district council made for moving to new offices was based on a false assumption – as we and local protestors said all along. They’ve wasted £16 million on state of the art new council offices and now they’re going to have to keep on spending money to maintain the old offices or allow them to fall into disrepair. The whole thing is an expensive shambles. It’s no wonder so many local residents feel angry and frustrated.”

Independent councillor Alistair Chisholm has also appealed for the council to “come clean” and tell the public what has happened and what the options are for the future. This policy of secrecy, for which West Dorset has been criticised by the auditors, has got to end. Local people are quite capable of looking at the facts and making up their own minds, if only those in power would give us those facts.”

John Grantham of Burton Bradstock, from the Public Holds WDDC to Account protest group, has described the financial shortfall as “a catastrophe”. He said: “The monumental truth is out ­– Charles Street Dorchester Phase 2 isn’t viable in any form without WDDC using even more tax-payer funds. They admit they’re now looking for an unbelievable extra £2million, effectively it seems just to keep the contractors going. But it’ll never just be £2 million more. WDDC’s track record on the project is appalling. It’s a catastrophe – exceedingly painful for all, including and especially surely those who’ve bulldozed this white elephant project through to-date.”

Like Cllrs Chisholm and Canning he has called for the public to have full, proper, detailed information, and be able, by voting on alternatives, to express a view binding on WDDC.
“There can be no ‘done deal’ led by a hand-picked executive from just one party. It must be done democratically – this time.”

West Dorset District Council Director of Resources, Jason Vaughan said: “The marketing of the Stratton House campus resulted in two bids, neither of which was consistent with the council’s expectations which were based on independent professional advice on the disposal value of the site. Although the results of the initial tender exercise are not what we would have hoped for, there are still a number of options to progress the disposal of the site which will be presented to the council’s Executive Committee next week. More details about each of these options will be needed before any decisions can be made, however, should the council choose to sell Stratton House for a lesser sum, or indeed retain the site until the property market recovers, the project to relocate to the new, smaller and more efficient offices in Charles Street will still deliver annual savings.”