This is a copy of an e-mail sent to the National Trust Area Manager for East Devon on 21st December 2012:

I last communicated with Area Warden in June/July 2010 over the Landowner Permission Form for the BEE (or Byes Environmental Education) project [now the Friends of the Byes], to allow us to undertake community and biodiversity projects on National Trust land. I have also been in touch with East Devon National Trust and I met up with the Ranger briefly last year when we discussed the project.

We have since planted a Community Orchard on the smaller part of the meadow and during the summer enjoyed a seeded wild-flower meadow on the larger open area. These sections of the Byes are now well-established and are a much-appreciated 'wilder' part of the extensive Byes park. This new addition is co-managed between EDDC and volunteers from Friends of the Byes.

I am writing to bring your attention to the misrepresentation of the status of these new additions to the Byes. They were added formally to the public park about four years ago when the fence separating the National Trust fields used for sheep grazing were removed to allow public access. They are basically 'semi-improved pastoral' areas. However, in the attached map from EDDC this area is included in 'Parks and Recreation Grounds', which is a misnomer. 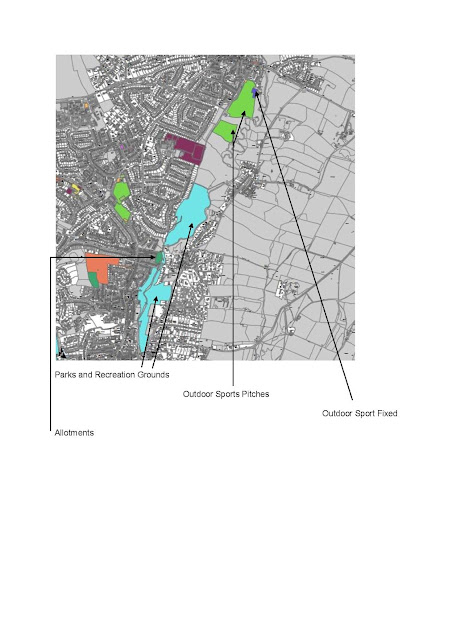 It should, rather, be classified as 'Natural & Semi-Natural Greenspace', according to the criterea on pages 17 and 25 of the East Devon Open Space Study (available at http://www.eastdevon.gov.uk/env029-eastdevonopenspacestudy.pdf).

Interestingly, on page 27 of the same Study, it classifies 'Parks and Recreation Grounds' thus:
3.32 Parks and recreation grounds refer to defined areas of green open space that have been
formally laid out for public enjoyment. Typically they will include lawns, flower beds,
paths, and occasionally facilities such as toilets or a food stand. This includes public
parks and gardens such as Connaught Gardens or The Knowle in Sidmouth...

I would like to copy you into correspondence between EDDC Planning Policy Officer Graeme Thompson and a colleague of mine in Sidmouth with regard to the nomenclature in the Study and with reference to the EDDC map which was made available for reference:

The Byes was visited during the audit. It is indeed a mixture of park and natural space, it does have features of both typologies, but is very much used as a park, with formally laid out paths and cycleways and managed amenity grassland. It has very heavy use, and it is important that the standard of maintenance is high. It also acts as a green corridor. In the assessment it is required to decide the typology a site best fits in with – of course not every site fits neatly in a classification. For this site, we decided that because of the heavy use and high levels of maintenance required it would fit better in the parks and recreation grounds category. This is an important point, as this typology attracts a higher level of funding and management than natural space which is crucial for this site.
As you will see from the plan attached which is a snapshot from the GIS maps, the area classified as The Byes (and therefore as the typology “parks and recreation grounds”), is just the area in light blue. The rest of the area which may be known as part of The Byes but is not covered by the light blue polygons, was considered to be private farmland and so was not considered to be open space. I have run these definitions past our Parks Development Officer who agrees with the classifications.

I suggested the following reply which has been sent to Officer Thompson by my colleague:

The Byes is indeed a mixture of park and natural space, it does have features of both typologies...

In which case, why, when elsewhere in the Study there has been scrupulous care given to delineation and nomenclature, is this particular site not subdivided and named with the same care? Why does the whole of the Byes have to be given the same overall outline boundary as if all 13.81ha were homogeneous? There has been a separation of different types of ‘outdoor sport’ facilities – but no recognition of the variety of different types of open space to be found in the area generically known as The Byes. As you say, not every site fits neatly in a classification, so why try to force one onto a location where it clearly does not fit?

And there is plenty to differentiate, specifically between the southern and northern sections of the two blue areas on the EDDC map.

> Gilchrist and Margaret’s Meadows included in the northerly blue polygon are owned and managed by the SVA as wild-flower areas with woodland and pond. To say that an area has very heavy use, and it is important that the standard of maintenance is high... is disingenuous, as these meadows are very popular, but the SVA takes care to give them a semi-natural feel, with occasional sheep-grazing and once-yearly mowing: ‘The Byes where the SVA currently hold 18 acres of trees and meadows, on the banks of the River Sid’    ( Sid Vale Association - Woodlands and Estates ) are clearly natural and semi-natural open space. The actual area in hectares, including Livonia Field as noted on the official NT map is 7.41ha.
At the same time, simply because a place is well-used does not mark it as park... For example, there are other local areas which are owned and managed by the National Trust and which require regular attention – for example, atop Salcombe Hill, which has formally laid out paths but are clearly not Parks & Recreatlon grounds as defined.. And there is the Knapp, which contains a community orchard attracting an EDDC-sponsored apple-pressing every autumn – and yet we have the official designation of ‘Nature Reserve’: www.eastdevon.gov.uk/knowledge_161009_issue_22.pdf

> There is the important new addition to the Byes in the southern section known as Sid Meadow; this is owned by the National Trust and was donated four years ago. These are not managed in the same way as the rest of the (southern) parkland of the Byes, having a very different topography and ecology to the heavily ‘manicured’ parkland to the west. These meadows, as with the SVA areas, are mowed once or maximum twice a year. Moreover, the management of the meadow-land and newly-instated Community Orchard is carried out by the both EDDC and Friends of the Byes: Friends of The Byes / Sidmouth BEE Project | Facebook. And this separate management is recognised by EDDC itself: East Devon District Council - Memorial Seats. I do not have the means to measure the hectarage accurately, but the NT’s map shows it to be a considerable segment approximating to 2.25ha.

I would very much appreciate it if you could contact Mr Thompson at: GThompson@eastdevon.gov.uk in order to query this innaccurate classification of National Trust land.

However, the purpose of my request to you goes much further. My colleague and I are currently part of a campaign in Sidmouth to attempt to stop EDDC from granting itself permission to build on its own 'Park and Recreation Ground'. It wishes to relocate its headquarters which are located at Knowle (referred to above in a more positive light in the East Devon Open Space Study) and to make this possible EDDC would like to maximize the asset value of the site by building on much of the parkland. http://www.eastdevon.gov.uk/movingandimproving

In the meantime, this case has generated enormous controversy. Amongst the media attention, The Daily Telegraph featured the larger Save Our Sidmouth campaign, of which Knowle is a central concern: http://saveoursidmouth.com/2012/10/23/save-our-sidmouth-reaches-the-daily-telegraph/; http://www.telegraph.co.uk/earth/hands-off-our-land/9625012/Sidmouth-mans-the-barricades.html. And in the local Sidmouth Herald, the local MP Hugo Swire has pledged to ask Minister Pickles to ‘call in’ the OPA should it be passed next month: http://sidmouthindependentnews.wordpress.com/2012/10/26/the-knowle-hugo-swire-is-neutral/.

I appreciate the National Trust cannot be seen to be 'political'. However, the body has expressed grave concerns about the direction of the central government's NPPF and as such it is clear that the National Trust wishes to 'make a stand' on protecting the nation's green spaces.

At point 3.32 on page 28/30 of this document, the consultants Bell Cornwell say that, based on Sidmouth’s population, there should be a provision of 13.9 ha of parks and recreation grounds, but there is currently a provision of 21.25 ha, which "equates to an exceedance of the standards by 7.33ha - a significant amount more than the town 'needs'.". This is according to how Bell Cornwall have calculated ‘Parks and Recreation Grounds’, but as I have suggested, their methodology is unsound. They have included ‘natural green space’ (aka the SVA meadows = 7.23 ha) and other 'wild/semi-wild areas' (incl the NT Sid Meadow and Community Orchard in the Byes = approx 2.5 ha) which are definitely not 'parks and recreation grounds'. In which case, Sidmouth probably has too little in the way of parks and recreation grounds.

I am sorry to be rather laborious but, despite this very same case having been made very clearly to EDDC, my colleague has been told the following today by Officer Thompson:
I have discussed with senior officers and the Chief Executive who has advised me that the best thing to do would be for you to make a representation on the New Local Plan which is currently out for consultation.

This we find totally unacceptable. My colleague will be contacting the EDDC Chief Executive Mark Williams at mailto:mwilliams@eastdevon.gov.uk to make it clear that this is a query with regard to a current Planning Application and should be responded to as such.

I hope you do not mind me contacting you in this way, but a letter directly from the National Trust querying these points would make matters very clear with regard to protecting the green spaces of Sidmouth.

I shall be contacting the head of the SVA's Woodlands and Estates committee, to ask him to make representations to EDDC in a similar way, on behalf of the Sid Vale Association.

We would be very grateful if the National Trust in would be able to query this seeming disregard for open spaces in East Devon.

Thanking you in advance.
With best regards,
Jeremy Woodward

Thank you for your email .

You make a very valid point about the National Trust's meadow land adjacent to the Byes. This is indeed managed as natural grassland.

We note your comment that this would have an impact on the amount of Parks and recreational land in Sidmouth as defined in the study.

And the Sid Vale Association has confirmed the status of meadow land in the Byes:

As I understand it ... any change of use for NT land requires an Act of Parliament before it can be allowed.  When we bought the Hooke Field (now Margaret's Meadow) with money from the Landscape Fund, one of the signatories was the Director of NT SW, so that the land would have the same status as NT land.
.
.
.
Posted by Jeremy Woodward at 10:15