The Elm, the Holly and the Beech

Richard Mabey is that rare species - a gifted writer who can talk about the natural world in a way that interweaves botany, personal insights, intellectual history, art, memoir, poetry and an account of man's relationship with Nature.
Here he turns his attention to three favourite trees in the British landscape - the much-battered Elm, the festive Holly and his own 'personal' tree, the Beech.
Recorded on location in the New Forest his guests include the naturalist Clive Chatters and founder of Common Ground, Susan Clifford.
BBC Radio 4 - Mabey in the Wild, Series 2, Episode 2

Help bring the great British elm back to Devon

The Conservation Foundation are running The Great British Elm Experiment in an attempt to discover why some trees survived the Dutch elm disease which wiped out over 25 million elms in the UK.
We would love to contribute to this and can get free saplings to plant in Crediton ... the only problem is where to plant them???
Can you help? If you have any ideas where we might be able to plant a young elm in or around Crediton or if you have a garden yourself and would like to take part then please contact us.

“A much-loved evergreen tree with prickly leaves and scarlet berries, in winter the holly outranks: ‘the first tree in the greenwood, it was the holly’ the ‘Sans Day Carol’ proclaims. Cuttings brought in on Christmas Eve once protected homes from fire, lightning, witches and fairy folk. With pagan roots in Roman Saturnalia, holly was Christianised in carols that linked its red berries to the blood of Christ. But traces of the ancient Holly Boy and Ivy Girl, personifying the battle of the sexes, persist in old songs, where the prickly holly sometimes triumphs over the clinging ivy: ‘Of all the trees that are in the wood, the holly bears the crown.’
Spared by farmers, since bad luck would surely follow, it is today the commonest hedgerow tree in the vast arable plains of East Anglia. In east Sussex holly trees are left to stop witches running along the hedge tops. Hollies are widely protected as boundary markers, long growing and easily identified, with lingering resonances that link cutting down with bad luck. Perhaps the evergreen tree was a symbol of life; the Green Knight is depicted holding a holly bush as a club, and some see the Cerne Abbas Giant’s club as knobbly holly.
Able to withstand grazing and cutting, hollies can form a virtually impenetrable living wall. Holly-rich hedges thrive in south-east Suffolk, especially the Shotley peninsula; around Woburn and Ampthill in Bedfordshire; and on the Chiltern dipslope in Hertfordshire, clustered around Saratt and Chipperfield. Holly hedges are also a notable feature in counties bordering the Pennines.
Remarkably tolerant of shade, hollies survive in the understorey of oak and beech woods, slowly growing up to sixteen feet, but poised to shoot up should a gap appear. Woods rich in hollies are rarely found outside Britain. Vulnerable to prolonged frost, the trees do best in damper, warmer of the South and West, or near to coasts in the East.
The importance of the tree to Hulver in Suffolk is shown in the village sign; the original name, Holieverd, means ‘green holly.’ At Staverton Park in the Suffolk Sandlings squat pollard oaks festooned with moss and ferns are joined by hollies contorted into fantastic shapes. This ‘jungle of monstrous hollies’ as Peter Marren described it, known as the Thicks, is the legacy of regular pollarding over 250 years up to 1850. The upper branches of the hollies were lopped off to provide winter fodder for livestock. Young saplings and the upper branches are particularly palatable; the trees produce prickly leaves only on their lower branches, to the height reached by cattle or deer.
Magnificent groves of old pollard hollies, once exploited in a similar way, survive at the north end of the Stiperstones in Shropshire, where crofters grazed their sheep and cattle. It is one of the few remaining examples of such holly-dominated wood pasture, known as hollins, and is perhaps the oldest stand of holly in Europe; some trees could be four hundred years old.
Another ancient and unique wood is the amazing stand of windswept holly bushes, no more than thirteen feet tall but with girths of up to 56 feet, rooted on the bare shingle at Holmstone Beach in Dungeness, Kent. Just a few acres in extent, the wood could be very old: holm derives from the Anglo-Saxon name for holly, and a royal charter of 741 alludes to a wood on the shingle roughly in its present position. The wood, which once housed a heronry, was old when the celebrated traveller John Leland mentioned it in his Itinerary of 1539.
In the Hamps and Manifold valleys in Staffordshire, old pedunculate and sessile oaks consort with holly in a classic partnership. Also in the west Midlands, a relict wood pasture, carved out of a royal forest in Sutton Park, supports sessile oaks and a luxuriant riot of holly that rivals the famous holly groves of the New Forest”     From 'Holly' p.232
December
England In Particular
Trees, Woods and the Green Man
Common Ground

Enjoy many ancient trees as you explore the Killerton Estate

There are many fine ancient oaks and sweet chestnuts in the park, but it’s a couple of the lesser species which are of particular interest. One of my favourites is an ancient hawthorn which had a decayed hollow trunk into which a birch seed fell, sprouted and took root.
Ancient tree walks - National Trust
Killerton ancient trees walk - National Trust 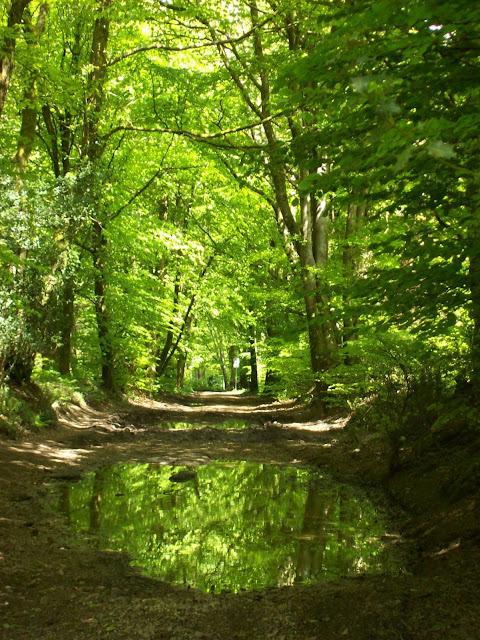 Beech hedges give bright splashes of colour to many parts of the county, with leaves which are copper in the autumn and bright green in the spring. They cast a dense cooling shade
in the summer. These hedges are particularly characteristic of Exmoor and high ground on the Blackdowns.
Beech hedges differ from the others on this poster, being planted with just a single species. They were normally made by landed estates during the 18th and 19th centuries to mark out the boundaries of newly-enclosed fields.In some areas, such as the Blackdown Hills, the hedges have been allowed to grow into lines of majestic trees, while in other areas, such as the South Hams, they are more often kept low by regular trimming or laying.
www.devon.gov.uk/devons-distinctive-hedges-sept-11.pdf

Beech Hill Community home page
Diggers and Dreamers - The Guide to Communal Living in Britain
.
.
.
Posted by Jeremy Woodward at 13:13