The Sidmouth Arboretum had a fantastic day of events last month, as recounted in the write-up in the Sid Vale Association's latest quarterly newsletter out this week.
This is the full version:

The Sid Vale Association and the Sidmouth Arboretum both claim to be first of their sort.   The SVA was the first civic society - founded in 1846 -  and the Arboretum makes claim to be the first civic arboretum – possibly in the world. The claim could be disputed by Derby Arboretum which was created on land given by mill owner,  Joseph Strutt, to the City of Derby in 1840. The difference is the Sidmouth Arboretum seeks to include both private and public land owners within the Town Council jurisdiction to participate in its aims.

Our first aim is to recognise the value of our heritage trees. Many were planted in the heyday of Victorian Sidmouth, at a time when country estates – such as the Holford family at Westonbirt the National Arboretum – were enthusiastic to establish a plant collection from the new species which were arriving from abroad.   So we have very mature Monterey pine, Scots Pines, Tulip Trees, and Giant Redwood which are nearing the end of their life. There are also examples of well established sweet chestnut and holm oak which had come from the Mediterranean areas possibly in Roman times. These are magnificent trees, host to a wide variety of birds and insects.  We need to plant NOW so that our grandchildren can also appreciate such venerable trees. 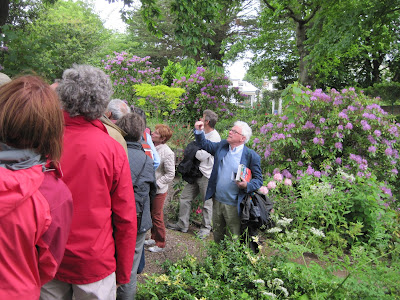 The morning sessions were free and began with the urban environment. Keith Sacre of Barcham Trees and a founder member of south west Tree and Design Action Group noted that trees in Sidmouth are disappearing under the building developments - currently at Fortfield and Mill Street for example. TDAG say trees should be an integral part of the planning process, with clear standards for the protection, care and planting of trees.   One tree removed demands several small replacements to provide the same size canopy. Kenton Rogers, an experienced urban forester and arboricultural consultant, explained that the value of trees can be assessed in scientific terms. For instance which tree is most efficient at removing pollution from the atmosphere – or which tree is most likely to alleviate flood risk. If we organised a survey of the trees of the Sid Valley, then we would have facts and figures with which to plan for future gardens and landscapes.

Chris Woodruff of the AONB East Devon and Nick Davey spoke next about the rural environment. The value of landscape and how to maintain hedges and wooded hills, while balancing the needs of farmers and walkers. The recent evidence of tree diseases and insect attacks on trees was put into perspective by Nick Davey, of Perrie Hale Nursery, who both grows and supplies saplings throughout East Devon.

We want to encourage more planting of trees and shrubs – woody plants which have a presence throughout the year and provide not only leaf and flower colour, but wider benefits for wildlife and human environment. And we want to help people understand the importance of plants – and how they grow. There is no shortage of species to choose from but too few come into our gardens, as we – and the District Council - rely on a limited proven range.

And we aim to increase understanding of values of trees and shrubs, including hedgerows. And their value to reduce air pollution, ease flood control, add to the aesthetic senses of smell and beauty, and improve variety of flora and fauna. After all  without photosynthesis, where would we be?

The afternoon session began with a guided walk led by Roy Lancaster OBE writer and broadcaster, and Hugh Angus, consultant to the Arboretum, who has come to know the town well.    We were fortunate to be invited into the Belmont Hotel garden as well as two private gardens ending at Littlecourt Cottages with tea taken in the delightful gardens and terraces.  Most returned to Kennaway House for the final session with Professor Julia Slingo OBE speaking on climate change and the possible effects on arboretum planting. Julia is particularly interested in the more unusual fruit trees, such as mulberry and quince, and we are looking for a suitable site in Sidmouth.
Roy Lancaster then gave a lively talk based on a selection of foliage and flowers which we had collected from around the town. Roy has visited some amazing places in pursuit of unusual plant species and is a lively and humorous speaker. Hugh Angus brought the proceedings to a close, and we discussed the priorities for the year ahead.

We acknowledge with grateful thanks the support of the Keith Owen Fund – in particular for the web site and Tree Trail leaflets.

On the Arboretum's own pages, the report concludes with:

Hugh Angus  concluded the meeting by thanking all the speakers and in particular Diana East for organising the day. He along with all the speakers wished the arboretum project success and hoped that it would become a model all over world.

His final anecdote proved how useful trees were when hiding from angry clients at least as long as they do not look up and see your feet in the canopy.A glass of bubbly and cakes ended the day with more informal and increasingly animated discussions...