This is Sidbury's last remaining pub:

A Traditional Bed and Breakfast

We are a local village pub set just a few miles away from the Regency town of Sidmouth.
With home cooked food served in the evenings at week-ends, as well as light lunches.
We have four bedrooms and offer both bed and breakfast facilities with evening meals.
You can also enjoy our great selection of draught and traditional real ales.
Please call 01395 597313 to find out more.
Red Lion Inn | Pub | Sidbury


And it has been voted one of the top pubs in the area:
Last chance to pick your favourite pub | This is Exeter
Claire Wright - Your Independent East Devon District Councillor for Ottery Rural

Indeed, it is "the highest placed pub in the Competition in the Sid Valley area!":
The Pub In The Village : Red Lion in Top 10 of Exeter Express & Echo's Pub of the Year Competition 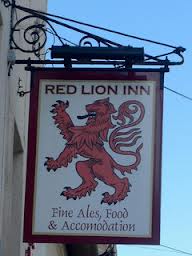 But it is now under threat:

Villagers fight to save their only pub

Thursday, May 16, 2013
By Fran McElhone
A community is rallying together to ensure its village pub is not sold off to a developer and lost forever. The Red Lion in Sidbury has been put on the market by premises owner Punch Taverns.
Neil Anthony, who has been running the pub for five years, has been told by the company his tenancy will not be renewed when it runs out this autumn. The move has sparked concern among villagers who see the pub as their community hub.
Nationally, about 16 pubs are closing every week according to the Campaign for Real Ale. It blames high beer tax and high prices dictated by the companies that own the venues as well as the economic downturn.
A spokesperson for Punch Taverns said the decision was part of a review of its less sustainable venues.
Residents have already set up a Facebook page, Thepubin Thevillage | Facebook, to help highlight their concerns.
Resident John Loudoun, 59, who has been going to the pub for around 15 years, called the meeting. "We've known for some time it may come up for sale," he said. "The worry is that if it is considered not viable, it may be sold on to someone who does not want to keep it as a pub. It's the only pub in the village, which needs a pub which is often the focal point of a community, where people can get together. And there is the potential for it to house other amenities. For example, the village lost its Post Office some time ago. It's a trend we're seeing around the country. That's our biggest fear."
A spokesman for Punch Taverns said: "It is always our preference that our pubs continue to trade as pubs, however we do review our estate regularly and may explore other options around the future of our less sustainable sites, or where they might better fulfil their potential for the local community under different ownership. Following such a review, a decision has been made to put the Red Lion on the open market for sale with our agents Jones Lang La Salle."
For more information visit the Facebook page at, Thepubin Thevillage | Facebook or the blog at  The Pub In The Village
Alternatively follow the campaign on Twitter at ThePubInTheVillage (SaveTheRedLion) on Twitter or to get involved email, thepubin thevillage@gmail.com

Villagers fight to save their only pub | This is Exeter 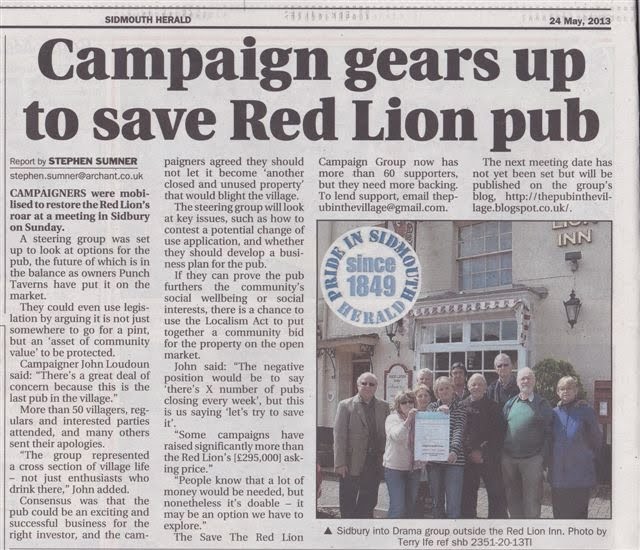 Although the current owners have no mention of the Red Lion, Sidbury:
Pub Business | Punch Taverns

The Red Lion, however, is the 'centrepiece of the community':

Save The Red Lion Campaign

The Red Lion is the only pub in Sidbury village. In response to the announcement that the Red Lion’s owners, Punch Taverns, had put the pub up for sale a packed meeting of over 50 villagers met on 19 May 2013 to express their concerns about the possible implication of this sale on the village.
At the meeting a resolution was agreed -

We agree to establish a Campaign Group with the objective of ensuring that the Red Lion, Sidbury is retained as pub for the community. To support this Campaign we agree to create a Steering Group which is charged with fulfilling this objective. We encourage all those who share the Campaign’s objective to join us.

The Campaign hopes that a purchaser will come forward who has the vision & business objective of making the Red Lion a viable pub for the community in the heart of the village. However, the Campaign must consider what options would be available to allow the Red Lion to be retained in case a purchaser does not materialise or seeks to change its use. The Campaign’s objective is to ensure that the Red Lion is retained as a pub – please support this endeavour.

If you want to support the Campaign & be included in its mailing list, forward your details to – ThePubInTheVillage@gmail.com

Read regularly about the Campaign & related events at - http://thepubinthevillage.blogspot.com

The Red Lion remains open & your custom is most welcome. Sidbury is a pleasant village surrounded by great countryside & there are plenty of wonderful local walks. You can always stay at the Red Lion as part of enjoying your break in the Sid Valley.

The Pub In The Village – Save The Red Lion Campaign dedicated to retaining the pub in the heart of Sidbury village.

And the campaign has taken a further serious step:

By obtaining the listing, which we anticipate should be concluded by early/mid September, then in addition to Punch Taverns not being able to immediately sell the Red Lion, the Campaign can start to properly evaluate whether it wants to start the process of making a bid for the pub.

This is a significant moment for the Campaign as it demonstrates that it is absolutely serious about retaining the pub ﻿﻿﻿for the community & that there is a clear belief amongst Campaigners that the Red Lion can be turned into a viable & successful business. This request for the Red Lion to be listed as an "Asset of Community Value" is the first to be made to East Devon District Council for a pub, & the first to be made to the District Council by a local campaign group! Across the UK there are only about 70 pubs that have been listed by Councils as an "Asset of Community Value".

A copy of the Campaign's press release that was issued today announcing this news is athttp://sites.google.com/site/thepubinthevillage/19.7.13SaveTheRedLionPressRelease.doc
In addition to asking the District Council to list the Red Lion, the Campaign is also now in the process of applying to the Government's Department for Communities and Local Government for a significant grant to allow it to undertake "pre-feasibility" work associated with preparing to make a bid for the pub. This grant will allow the campaign to be supported by professional advisers in evaluating the likely cost of purchasing & upgarding the pub; in starting work on an outline business plan & getting the pub independently valued & possibly surveyed.

Save The Red Lion Campaign expects that by early September it should know if the pub has been listed as  an "Asset of Community Value" & whether it has been awarded the grant which will enable it to take the move to purchase the pub for the community to the next stage. So the next 6/8 weeks will be a bit nailbitting for the Campaign!

The Campaign has not forgotten that the local community will want to fully understand how the next stage will work & to have their say in what the pub should provide, beyond the traditional pub fare, as a community asset. So in early/mid September the Campaign is planning to hold a public meeting in the village to update & engage with the local community.

This is really the start of what will be an exciting, time consuming & determined period for the Campaign as it starts to turn good intentions, that were originally voiced in mid May at the original public meeting that created the Campaign, into actions.

Come with us on this journey! Please support the Campaign as it progresses.
Posted by John Loudoun at 05:25
The Pub In The Village : A Community Action 1st in East Devon!
.
.
.
Posted by Jeremy Woodward at 07:28