If you go down to the Byes tomorrow...

There will be a little meeting at the wildflower area in Sid Meadow tomorrow morning: the Sidmouth Herald will be down there "to do a photo-shoot and to find out more about the improvements to the Byes park which have been made over the last couple of years."
Do go along and join them - at 9.30 in the meadow - especially if you've been a volunteer with the Friends of the Byes, who initiated these projects. [Futures Forum: Friends of the Byes]

Whilst the District Council has been responsible this year for planting the Sid Meadow, it's been the work of the Friends of the Byes which has raised the funds for the wildflower displays and other changes in the Byes area. [Futures Forum: Sid Meadow in June 2103... and July 2012]

There has been considerable praise from the public for this, to take one correspondent: You may not be aware, but the EDDC has been responsible for the planting of a delightful wild flower area in the Byes and the flowers are looking just wonderful at the moment. The area in question is at the back of Sid Meadow in an area once known as the Roly Poly Field, raised above the river Sid. It can be accessed via a slope or a flight of steps from the eastern side of the Byes and the flowers have been planted in drifts at the back of the field.

And here are the last two interpretation boards put up recently in the Byes, following on from yesterday's posting. [Futures Forum: If you go down to the Byes today...] 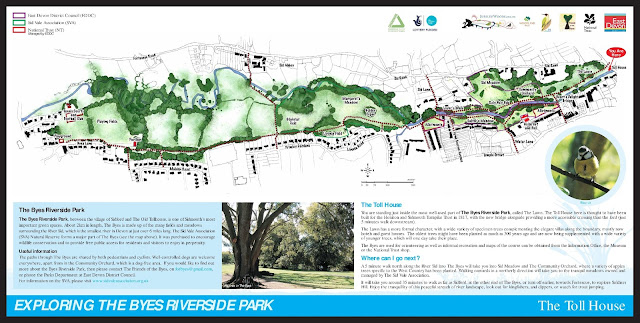 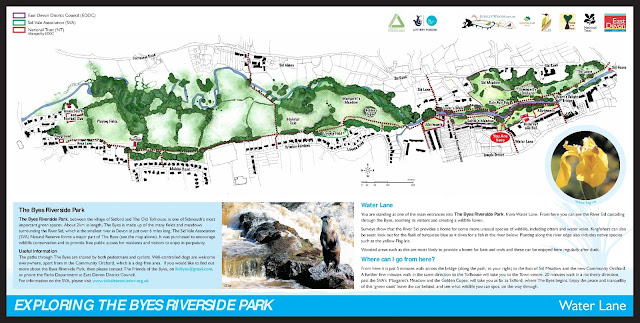 Watch out, then, for some great shots of wild flowers and young trees in their full summer glory - in the Sidmouth Herald... [Home - Sidmouth Herald] which has a nice wildlife story this week:

April Rose by her hive in the garden. Photo by Terry Ife

Stephen SumnerThursday, July 11, 2013
11:00 AM
A Sidmouth chiropractor takes time out of fixing slipped discs to tackle sting risks as she collects unwanted swarms of bees.
She does it in an effort to sustain a population that is threatened by pesticides so leaves the honey for the bees to enjoy. April Rose had a love of apiculture instilled in her as a child, but when her hive was crushed last year she decided to rescue the critters where they were unwanted.
“I grew up in Birmingham and my dad always wanted to keep bees, but you needed a licence in those days – I suppose it started from there,” said April. She did a natural beekeeping course at Embercombe, in which she learned how little bees need from humans.
April was devastated when her hive was crushed last year when she was having a wall knocked down, and now she is starting again from scratch.
This is the time of year when hives are likely to be found. April has already had two calls, but neither hive could be moved. She can collect bees from various locations, including trees and attics, but has to be able to safely reach inside the hive.
When a queen is moved, the rest of the bees tend to follow. The average hive contains around 60,000 bees and the queen is constantly laying eggs – some 2,000 a day, more than her body weighs.
April plans to rehome claimed swarms in her hive, and when that fills up she has beekeeping friends and customers who are interested in getting started who will take them. “I will always be able to find a home for them,” she said.
Bees drink ‘tonnes’ of water, and on top of making honey to store for the winter, also make ‘bee bread’ and royal jelly. But the foodstuffs can become contaminated with pesticides, such as neonicotinoids which have now been banned, so beekeepers are stepping in to reverse the decline.
April collects from Sidmouth, Seaton and the surrounding area.
To arrange a collection, call her on 07973 202441.
Beekeeping chiropracter rescues swarms in Sidmouth - News - Sidmouth Herald