This is a report from today 18th July, from BBC Devon: 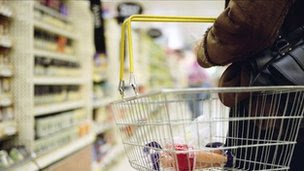 Conservative-controlled Torbay Council has been told in a report that it could raise £804,950 by taxing eight stores.
Large stores in Torbay should be taxed to raise more than £800,000 for the community, say Liberal Democrats.
They are supporting a campaign to impose a levy of 8.5% of the business rate paid by stores with a rateable value of at least £500,000.


Local Government Minister Brandon Lewis said taxing supermarkets more would push up the cost of living.
The proposal by the Liberal Democrat group on the council could affect two Sainsbury's stores, a Morrisons, Asda, Dunelm, Marks and Spencer, B&Q and a Currys store.
It said the proposal should be put to the government for approval.
Money raised would be spent on "promoting local economic activity, local services and facilities, social and community wellbeing and environmental protection".
'Struggling businesses'

Lib Dem MP Adrian Sanders, who is backing the proposal, said: "Big chains like Asda and Sainsbury's gather in massive profits every year but this rarely makes its way to local communities like Torbay.
"This move would start to rectify that and help some of our struggling local independent businesses and charities."
Local Government Minister Brandon Lewis, however, said: "Imposing new, additional taxes on supermarkets will push up the price of food and the cost of living, hitting low-income families the hardest.
"We ruled out such a bid for higher taxes under the last round of the Sustainable Communities Act proposals.
"There are much better ways to support small shops."
He said the government was doubling small business rate relief and making it easier to claim.
The British Retail Consortium, which represents big businesses, said: "Retailers both large and small are at the heart of local communities and their contribution includes offering good employment to local people as well as a wide range of quality products at competitive prices.
"Retailers already contribute significant amounts of national and local tax, and notably the sector contributes 28% of all business rates, so the focus should be on affordability for all."
Morrisons said: "It's a bad idea to target a small group of businesses to raise extra taxes, especially when those businesses employ hundreds of people.
Retailers have to make decisions about where to invest and that's one of the reasons why business rates should be uniform through out the UK."
The issue is being discussed by a full meeting of Torbay Council later.
BBC News - Call to tax Torbay supermarkets