1.4 The total approximate cost for the carrying out of “essential priority” works at March 2013
to halt and rectify building deterioration, remedy health and safety issues and reduce energy consumption is £1,566,000

1.7 In terms of energy / carbon savings this represents very poor value on the money spent. This is potentially due to:-
·  The floor area of Knowle of 7,722m2, when EDDC requires a maximum functioning area of 4,225 m2 reducing to 3,352 for their Work Smart initiative.
· The nature of the structure and fabric of the Knowle building.
· The current inefficient electrical night storage heaters requiring replacement.
· Some of the “essential priority” works needing to be carried out for health and safety reasons.

And yet, whilst no break-down of the 'essential priority' works has been made publicly available it is difficult to verify these figures, which have been represented pictorially:

This depiction has been reproduced in the current issue of the Sidmouth Herald:

The council aims to find an office option which is both financially viable and environmentally friendly as well as allowing it to operate in a more modern, flexible way which suits residents.
Knowle’s fate to be debated next week - News - Sidmouth Herald

But what do we mean by 'environmentally friendly'?

Here is the submission by the Sid Valley Energy Action Group to the application to develop Knowle back in June 2012:


Why do we love old buildings?

There is no doubt that old buildings were not built for energy efficiency, but does that make them unsuitable for current occupation?

If we look at the last recorded Display Energy Certificate (DEC) (see attachment below) for the Knowle, we see that the Knowle scores a creditable “C” rating on an A-G scale. However, there are several notable points arising from this, and the advisory report also attached below.
The most important of these factors is that the report expired on the 30/09/2009.
There are no apparent records of a more recent report, which begs the question, why not? These reports are provided to illustrate ways of improving energy efficiency, and the results can be improved year on year, so why has EDDC chosen not to?

Many factors affect the living or working in an old building. These include location, aesthetic appeal, suitability for purpose, the surroundings and the accessability to name a few. It is unlikely that any building will tick all the boxes but the Knowle can easily achieve all of these.

There is certainly no evidence that staff within the Knowle have any desire to move to Honiton.
Also a number of energy efficiency measures can be implemented to improve the building. There is no possibility that the carbon impact of a new build will represent a carbon saving in the next few hundred years, therefore a relocation should be seriously reconsidered.

Referring to the advisory report, if basic measures of insulation and energy efficiency
awareness training are undertaken, together with other techniques of solar thermal and solar PV which make good economic sense, combined with a proper energy policy there is no reason why the Knowle should not remain the home of EDDC for the benefit of employees, residents and the whole of Sidmouth!

What is exactly meant by a 'carbon saving'?

There have been several studies looking into the impact of building something new - as opposed to renovation:


What's the carbon footprint of ... building a house 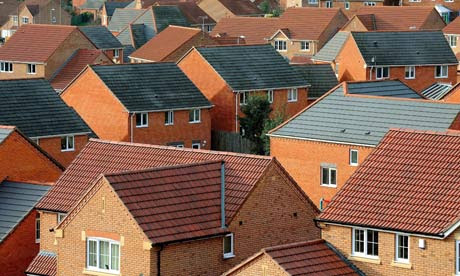 New houses such as these ones in south Derbyshire take lots of energy and resources to produce. Photograph: Rui Vieira/PA

The carbon footprint of a house:80 tonnes CO2e: A newbuild two-bed cottage

The carbon footprint of building a house depends on all kinds of things – including, of course, the size of the house and the types of materials chosen.
The estimate of 80 tonnes given above is for the construction of a brand-new cottage with two bedrooms upstairs and two reception rooms and a kitchen downstairs. It's based on a study that I was involved in for Historic Scotland. The study looked at the climate change implications of various options for a traditional cottage in Dumfries: leave it as it is, refurbish, or knock it down and build a new one to various different building codes. We looked at the climate change impact over a 100-year period, taking into account the embodied emissions in the construction and maintenance as well as the energy used and generated by those living in the building.
Unsurprisingly, the worst option by far was to do nothing and leave the old house leaking energy like a sieve. Knocking down and starting again worked out at about 80 tonnes CO2e whether the house was built to 2008 Scottish building regulations or to the much more stringent and expensive Code for Sustainable Homes Level 5 that demanded 'carbon neutrality'.
Here's how that total broke down for the carbon-neutral option:
• Walls 60%
• Timber 14%
• Pipework and drainage 9%
• Floors 5%
• Slate roof 5%
• Photovoltaic panels 3%
• Other 4%
Eighty tonnes is a lot – equivalent to five brand-new family cars, about six years of living for the average Brit or 24 economy-class trips to Hong Kong from London. But a house may last for a century or more, so the annual carbon cost is much less – and for all the new-build options, the up-front emissions from construction work were paid back by savings from better energy efficiency in 15–20 years.
However, the winning option was to refurbish the old house, because the carbon investment of doing this was just eight tonnes CO2e, and even the highest-specification newbuild could not catch up this advantage over the 100-year period. Once cost was taken into account, refurbishment became dramatically the most practical and attractive option, too.
If this one study is representative, the message for the construction industry is clear. Investment in the very highest levels of energy-efficiency for new homes is, even at its best, an extremely costly way of saving carbon. Investing in improvements to existing homes is dramatically more cost-effective.

What's the carbon footprint of ... a house | Environment | guardian.co.uk


Home is where the heat is: why old can be good as new

Revamping old homes is greener than building efficient new ones, a charity claims. By Huma Qureshi 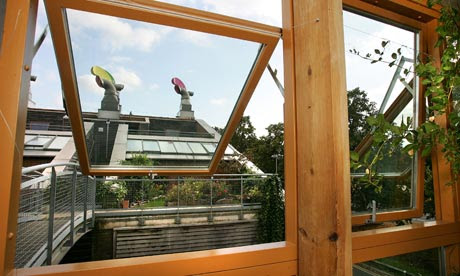 The Empty Homes Agency compared three new-build homes with three refurbished ones and found very little difference between them in the amount of CO2 given off in normal day-to-day energy use. But while the construction of a newbuild home gives off 50 tonnes of CO2, the refurbishment process of an existing one emits just 15 tonnes of CO2

Home is where the heat is: why old can be good as new | Environment | The Observer


Housing and sustainability: demolition or refurbishment?


The demolition or refurbishment of older housing has been an active policy area since the late 1880s in the UK, when the government first authorised the statutory demolition of unsanitary slums. The debate on demolition and new building has been intensified since 2003, with government proposals for large-scale clearance and new construction. This paper summarises the evidence and debate on whether demolition would reduce greenhouse gas emissions from buildings. It examines whether a more achievable and socially beneficial route to reducing energy use in the built environment exists, based on the fact that buildings account for half of the UK’s carbon emissions.

This paper argues that large-scale and accelerated demolition would neither help with meeting energy and climate change targets, nor would it address social needs. Refurbishment offers clear advantages in time, cost, community impact, prevention of building sprawl, reuse of existing infrastructure and protection of existing communities. It can also lead to significantly reduced energy use in buildings in both the short and long term.


CONCLUSION
Whatever the ratio (10:1 or 10:3) it is clear that refurbishment is much CHEAPER in terms of carbon emissions than new-build.
The issue is not 'energy efficiency' in the use of a building.
It's all about the 'embodied carbon' in the construction of a new building.
And that has much more of an effect environmentally - and financially.
.
.
.
Posted by Jeremy Woodward at 15:05