There will be an 'additional meeting' of the District Council's Development Management Committee (or planning cttee) this coming Wednesday 8th May: 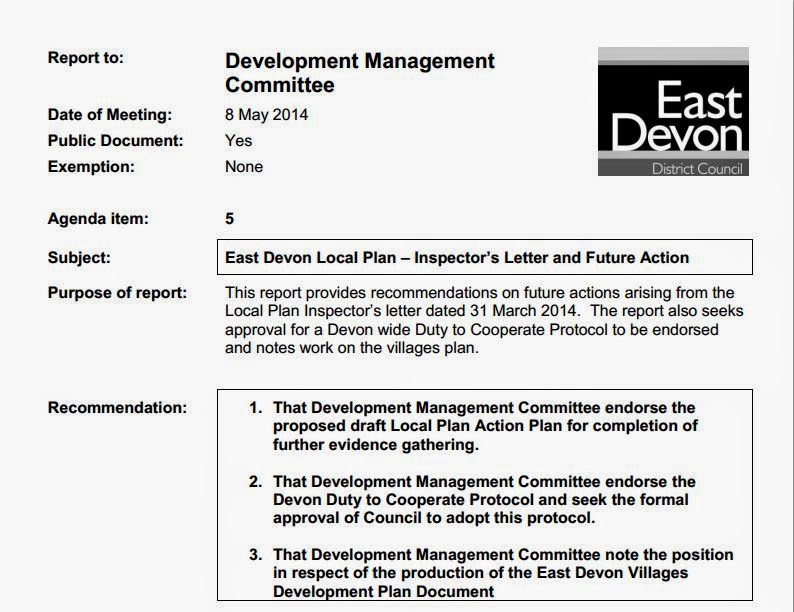 The focus will be on putting together an 'action plan':

In order to make further progress on Local Plan production it is appropriate to undertake further work in response to matters raised in the Inspector’s letter.

MAY 5, 2014
So what has been EDDC’s response to Mr Thickett’s damning criticism of a Local Plan that has been years in the making, and yet is still found to be “unsound”?
The answer lies in the papers for the Development Management Committee (DMC) meeting to be held on 8 May. It’s a disappointing read, studiously avoiding commitment to a target date for the delivery of a revised Local Plan.
The paper acknowledges the need to work closer with West Dorset, to ensure that housing needs are met cross-border. (Too bad it took Mr Thickett to point out that the draft Local Plan seemed to have forgotten to do this.) The paper also volunteers that East Devon will have to help solve the housing needs of Exeter City as well.
However, rather than defend its turf, the turf of a district of which about two-thirds is to be found in Areas of Outstanding Natural Beauty, the paper makes no attempt to avoid being caught between the hammer of Exeter and the anvil of West Dorset.
Why is EDDC not fighting its corner? “There is some, though maybe limited scope, to question the appropriateness of continuation of accommodating part of Exeter generated development needs in East Devon and indeed to consider capacity constraints and limitations in the District overall”. Damn right, etc.
The paper continues, “it is not clear how such capacity limits could be modelled and established”. Has anyone tried? A Duty to Co-operate should not mean rolling over and giving away countryside to our neighbours.
Elsewhere there is more to worry about. The villages Development Plan Document is to be put on the back burner, and the methodology used to calculate growth in villages – a blanket 5%, dismissed as too crude a tool by Thickett – is to be re-evaluated. Villages of East Devon beware!
One might have thought that EDDC would be anxious to have monthly updates, a transparent assessment of how close it was hitting housing numbers. Not a bit of it – the best the paper can do is generously offer to review the position not annually, but twice a year. Why not for each meeting of the DMC? Given that EDDC recently approved c.750 houses in Pinhoe and 300 for Gittisham, how much further do we have to go before East Devon can breathe a sigh of relief?
There is one final issue which should give East Devon cause for concern, and that is Thickett’s observation that the Council did not have a Gypsy and Traveller plan in place. Nine sites will have to be found, and none have been put forward by landowners or agents. (Now there’s a surprise!)
While the DMC paper seemingly believes that reconvened hearing sessions for a revised draft could be complete by October – but this is only if significant changes are not required – the vagueness elsewhere in the paper, and the job of work to on the Gypsy and Traveller plan makes this aspiration look very optimistic indeed.
The plot Thicketts | East Devon Alliance
.
.
.
Posted by Jeremy Woodward at 10:41