From the latest edition of Building Design:

A short history of eco-supermarkets

As the axe hangs over Sainsbury’s pioneering Greenwich eco-store, Ike Ijeh looks at how the typology has evolved in the last 15 years Source: Alamy
When celebrity chef Jamie Oliver opened Sainsbury’s newest supermarket on the partially redeveloped Greenwich Peninsula in 1999, it was gushingly hailed by the media as the supermarket of the future. With its striking, timber-clad organic design and prodigious array of sustainability features, such as solar panels, bore holes and passive ventilation, Britain had never seen a supermarket quite like this before. For the time its sustainability credentials were impeccable and it was the first British building to receive a Breeam Excellent rating.
Barely a year after its completion it was crowned as one of the jewels in the massive North Greenwich regeneration project when it was only narrowly beaten to the Stirling prize by Will Alsop’s Peckham Library. Four years ago it scored a supermarket first when it was visited by South African president Jacob Zuma on his state visit to Britain after he had specifically requested a tour to see for himself the environmental credentials embodied in its design.
And yet, just 15 years after it was opened, the store already faces demolition. Last month Greenwich council controversially gave permission for the building to be demolished to make way for a new branch of Ikea. The Swedish retailer claims the existing supermarket is too small for its standard store template and Sainsbury’s, which has remained conspicuously quiet amidst the mounting furore, is already eyeing up a significantly larger site nearby.
The desperate and tragically familiar rituals of emergency conservationism have now swung into action with a campaign launched to save the building and an ambitious spot-listing application already lodged with English Heritage. But with planning consent and the hungry wheels of commerce already clearly set in motion, it is difficult to envisage how this pioneering footnote of British sustainable architecture can be saved.
Such is the inexorable buoyancy of London property speculation that while the demolition of landmark young buildings remains controversial, it is no longer particularly unusual, as Broadgate in the City scandalously demonstrates. But there is an obscene and particularly stinging irony about destroying a building after such a short space of time whose comprehensive commitment to the environmental agenda spoke of a self-professed desire to sustain and endure.
Moreover the type of building under threat at Greenwich is also significant. Supermarkets are not necessarily the kinds of buildings that immediately spring to mind when considering pioneering sustainable design.
Any sector that still revels in the committed carbon corpulence of the open freezer is unlikely to offer a particularly convincing treatise on environmental efficiency. Moreover, in recent years the much-publicised problems of the high street have successfully deflected both attention and perception of the retail sector away from sustainability and on to presumably more pressing concerns such as the threats from the recession and the internet.
However, in the 15 years since Greenwich Sainsbury’s was built there has been astonishing progress in sustainable design standards and aspirations within the UK supermarket sector. While this has yet to be felt across the vast bulk of the estimated 60,000 supermarkets in the country, there are certainly a handful of stand-out projects that not only set an environmental example to the rest of the sector but also provide a chronological gauge of how the sustainability agenda has evolved within retail architecture over the past decade and a half.
The potential sad demise of the first of this illustrious group of buildings provides an opportunity to revisit both this and some of the noteworthy successors it spawned. 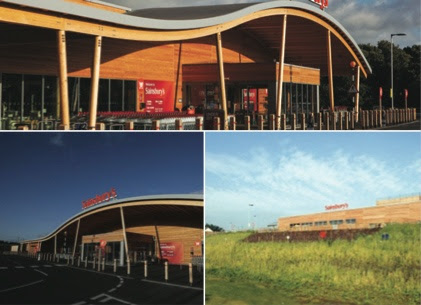 Before this scenic Devon resort captured the public consciousness with its dangling, storm-battered railway tracks, it was famous in design circles for something else: Sainsbury’s most sustainable supermarket since Greenwich. Its designers claim that this was the first UK supermarket to meet Passivhaus standards and with U-values of 0.2kw/m2, airtightness of just 1.8m3/m3/hr and 10% renewable onsite energy generation, it has the credentials to prove it. It also aims to achieve a net zero-carbon footprint over its operational lifetime. Once again the store’s aesthetics reflect its strong sustainability agenda with larchwood walls and roof. A recyclable PEFC glulam timber frame holds pre-formed timber cassette wall and roof panels which are largely responsible for the building’s airtightness and insulation performance. The store also incorporates a host of other sustainable features including natural light and ventilation, sensor-activated artificial lighting, a biomass boiler fired by locally sourced wood pellets, an eco balancing pond to provide ecological compensation and car park run-off, rainwater harvesting and waterless urinals.
A short history of eco-supermarkets | Opinion | Building Design
Eco-supermarket to be demolished – nothing is safe | Sidmouth Independent News

More on the eco-supermarket built in Dawlish in 2012:

"The" award-winning Eco Store for Sainsbury's Supermarkets.
On 3rd August Sainsbury’s opened their most sustainable supermarket to date, described as a step change in sustainable supermarket design. The CHQ Partnership based in Baldock, Hertfordshire were design and technical architects for the 26,000 sq ft store built on former agricultural land in Dawlish, Devon. The building was recognised by Sustain Magazine as a truly innovative example of retail architecture. The building subsquently won the Sustain Magazine retail design of the year award in 2012.

The store was conceived with sustainable design at its heart, utilising a recyclable PEFC certified timber frame. Preformed timber cassette wall and roof panels were specified, supported on a Gluelam timber frame over the sales area and a steel frame for the larger roof loads required back of house. The external exposed timber cladding uses Larchwood from renewable sources and the internally exposed timber panels in the walls and roof are Spruce.

The store was conceived with sustainable design at its heart

The use of timber cassettes for both wall and roof construction has meant that airtightness and building insulation levels significantly better current UK standards with U Values of 0.2kw/m2 and airtightness of just 1.8 m3/m2/hr. These results are considered to help the building become carbon neutral during construction and trying to achieve a net zero carbon footprint over its operational lifetime.
The new supermarket, which will act as a benchmark for the first supermarket designed to meet the Passivhaus Standard, includes in its design the following sustainable initiatives:

Our team were asked by Sainsbury’s to achieve the following targets:

Some might consider supermarkets to be 'un-eco':
Futures Forum: Local Retail Levy: District Council to debate
Futures Forum: "Promoting local economic activity, local services and facilities, social and community wellbeing and environmental protection"
Futures Forum: "Statistics show us that small and medium-size businesses (including those in tourism) are our life blood."

But there are certain trends:

Closer to home and at the local level the popularity and re-generation of Farmer’s Markets in the UK continues unabated. These are fostered by initiatives including the provision of designated sites for stalls/pitches, advertising and other support from the local authorities and trade organisations. A main driver for these is the organic label. Additionally, vegetable boxes, fresh meat, fish and their products, bread and pastries locally grown/produced help to foster the sense of regionality, community and sustainability. The producer is able to cut out the middle-man ensuring profitability and the purchaser is prepared to pay a premium for fresh quality products. Regional food fares additionally assist in marketing and with fostering a sense of identification of the public with their local market. Diversification and added value are drivers. European Union-led restrictions on milk supply for example, encourage farmers as suppliers to develop into butter, cheese and ice-cream production as producers. Supermarkets are being continually encouraged to include products grown locally within their range of goods and are making gestures in this direction. Across the Channel, whilst the French embrace their supermarkets with enthusiasm, they have never abandoned their love affair with street markets which are set up each week in most of the towns and villages. Again, an identity with region and community prevails.