Political earthquakes in the South West

UKIP have swept the boards across the country, including the South West.

From the party itself:


UKIP stuns the political class with fantastic Euro results across the country
26th May 2014
UKIP recorded an historic win in the European Elections, results confirmed last night, returning 23 MEPs, almost double its number of MEPs from 2009, with counting still to be concluded in Scotland and Northern Ireland.
UKIP Euro Results from across the country - UKIP
A summary from the Western Daily Press:
EU Elections 2014: Overview of South West results | Western Daily Press

And results from the Express & Echo:

UKIP and The Conservatives have topped the South West European Election polls with two MEPs each.

Prior to tonight's election the South West MEP make-up was three Conservatives, two UKIP and one Lib Dem.

After tonights elections the make-up is: Two UKIP, two Conservatives, one Labour and one Green.

In the South West, UKIP won 24 of 38 areas, Tories won 11, Labour two and Lib Dems one with Gibraltar.

The Conservative vote is believed to be down 1.4% in South West with the UKIP vote up 10.3%. 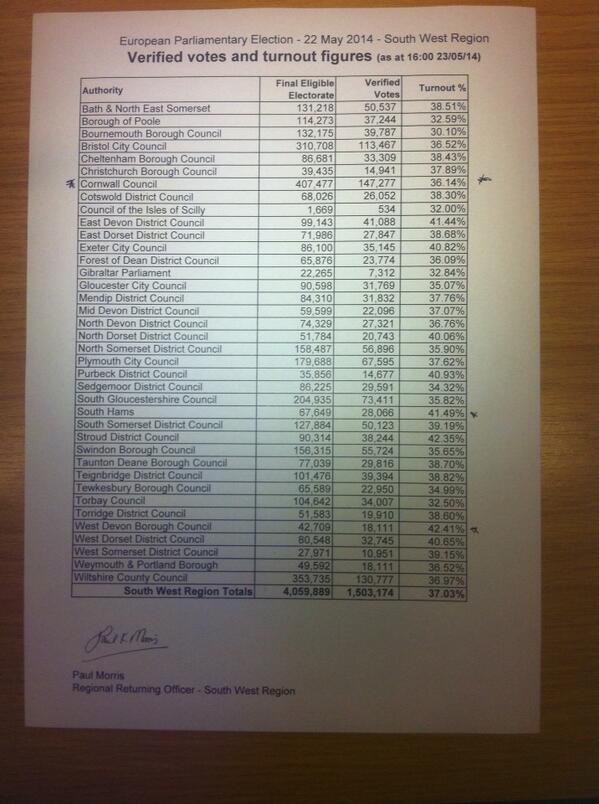 by becoming the first Green Party MEP for the South West. The Green Party gained 11.2% of the vote in the European Election, taking the 6th seat out of six.

Speaking shortly after the results were announced, Molly Scott Cato said: “It is fantastic that the South West now has a Green voice in Europe. I would like to thank everyone who voted Green on Thursday, and I am looking forward to representing the South West in Brussels.

“The Greens are the only party with a clear and positive message on EU reform, which I think was attractive to voters and translated into the result we see today. Our ‘people before profit’ policies have really resonated with voters who have been looking for a viable alternative party which truly represents their values.”

Greens across the region celebrated as they saw their vote share

The question will be, therefore, what 'political earthquakes' await East Devon next May...

SO, WHAT DO THE EURO ELECTIONS TELL US ABOUT OUR DISTRICT?
26th May

Well, it tells us that, on the right, there are 14,475 people in our district who preferred to vote UKIP to Tory.

It also says that there were 11,683 preferring to vote (in rough political terms) to the left of them.

Rather worrying if you are a majority party member...

So, what do the Euro elections tell us about our district? | East Devon Alliance
.
.
.
Posted by Jeremy Woodward at 08:28