There are now many films which explore or touch on climate change:
Futures Forum: Climate Change: the film

On the one hand, they annoy some:

"Cli-fi is a purveyor of climate change propaganda," Scott Blakeman, a research assistant at the Heritage Foundation, wrote in a blog post last month when "Godzilla" hit theaters. "However, the sweet irony in the cinematic genre of cli-fi is that the name reveals an underlying truth: The sensationalism surrounding climate change is simply fiction," he continued.
CULTURE: Climate change fiction gets hot in Hollywood (if you still don't get it, it'll get you) -- Wednesday, June 11, 2014 -- www.eenews.net

... whilst they irritate others:

Myths of human survival that evade questions of gender, race and social relations, won’t help us adapt in a world already being radically reshaped by environmental disasters and slow burning climate change, argues Agnes Woolley
The politics of myth making: 'Beasts of the Southern Wild' | openDemocracy

The rising waters of the untamed Louisiana bayou, melting polar ice caps, and the emergence of apocalyptic Aurochs are images that have defined the film and inspired conversations about climate change and the environment.
Environmental blog Care 2 recently wrote about Beasts of the Southern Wild, focusing on the environmental elements of the film:
The movie set in southern Louisiana and more than a few statements about climate change are placed in Hushpuppy’s mouth. “Everything has to fit together just right. If it doesn’t, it all falls apart,” she says. These words can be applied to a discussion about how our burning of fossil fuels can be linked to the the lessening sea ice in the Arctic and other world-wide effects of global warming.
Do you agree with Care 2’s analysis of the film? What is Hushpuppy referring to in the above referenced quote?
Read the full article here.
Is Beasts an Eco Fairy Tale? | Beasts of the Southern Wild

Indeed, some of these 'climate change' movies are less 'heavy' than others:

This is from the Observer from a couple of months ago:


After An Inconvenient Truth: the evolution of the 'climate change film'

For some filmmakers, climate change is now the equivalent of the nuclear scares of the mid-20th century 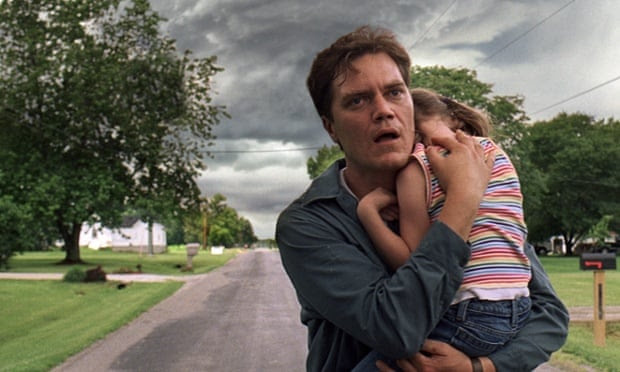 As we have begun to see the effects of climate change more severely, more frequently and closer to home, so too have film-makers been spurred to address the consequences of an irrevocably damaged environment in new ways. In both fiction and non-fiction, climate change is no longer depicted as the eventual cause of future calamity, but a reality affecting everyday life.

On the heels of documentaries that hoped to raise awareness by laying out the facts about climate change have come new ones showing the consequences of our behavior through spectacular images of an increasingly inhospitable environment.

An Inconvenient Truth, that PowerPoint presentation of a documentary from 2006, stands as a prototype of activist filmmaking, the kind of movie that caused Roger Ebert to write, apparently for the first time in his career, “you owe it to yourself to see this film.” 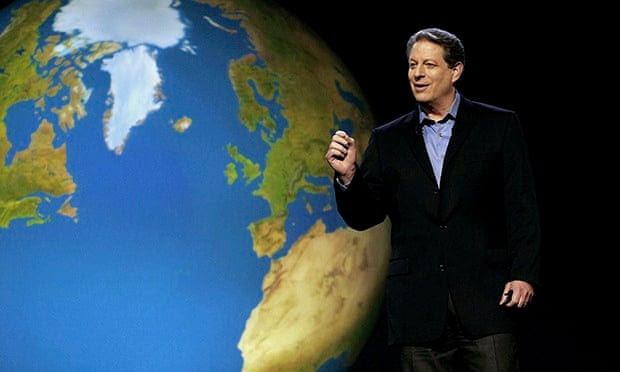 “Gore leads viewers with calm determination through facts and figures, laying out the problem at hand”Photograph: Allstar/Paramount

It bets on the power of reason: Gore leads viewers with calm determination through facts and figures, laying out the problem at hand. ‘How can you ignore the truth?’, the film seems to ask.

Years later, it seems Gore’s ‘truth-telling’ hasn’t been as successful as he’d hoped, and a series of more recent docs have broached new ways of approaching the issue.

James Balog’s Chasing Ice is no less eager to change the mindset and behavior of its audience than Inconvenient Truth; in fact, Balog explicitly states at the beginning that he is former climate change skeptic who has now seen the light, positioning his film as a hopeful catalyst for other similar transformations.

But Balog is also a photographer by trade, and his approach is correspondingly more visual than Guggenheim’s in Inconvenient Truth: the doc follows him and his crew as they trek into the Arctic and produce multi-year timelapse videos that dramatically show the melting of ice caps and glaciers. Inconvenient Truth, of course, also had photos displaying similar evidence, but Balog’s images go much further.

The images that Edward Burtynsky and Jennifer Baichwal produce in their documentary Watermark are equally striking. Unlike Chasing Ice, Watermark is not exclusively concerned with climate change. Its focus is on water in general, the ways we live with it, use it in religious worship, and attempt to control it.

There’s certainly a romanticizing element to the film; Like Balog, Burtynsky is a photographer and much of the doc shows him taking wondrous shots of environmental landscapes—of sprawling farmland, rivers, and rice terraces. But knowing what we do about climate change, the images of these locales carry a spectral warning of their vulnerability.

In a sense, then, Watermark takes for granted a certain amount of environmental awareness. It certainly places climate change within a larger panorama of issues, which is the same thing that many recent narrative films have done.

Most often, climate change appears in fictional movies like The Day After Tomorrow, Snowpiercer, or – remarkably ahead of its time – Waterworld as a set-up or explanation for disaster. In films like Night Moves and Beasts of the Southern Wild, though, it becomes a basic fact of the world we live in.

The two movies are miles apart in tone: Night Moves is a low-key thriller about three environmental activists planning to bomb a dam in Oregon; Beasts is an exuberant quasi-fantasy set in an isolated Louisiana community as it prepares for, and then deals with the aftermath of a large storm.

Yet in their own ways—whether by realistically profiling characters determined to force decreased consumption or by magically positing the existence of a raging band of aurochs, thawed out after centuries of captivity in the Arctic ice caps – both offer stories that sense that the end of Gore’s 10-year warning approaches.

In that respect, perhaps the best film we have about climate change is Jeff Nichols’s Take Shelter. Much like the 2008 remake of The Day the Earth Stood Still, but with more compelling results, Take Shelter signals how climate change has become our equivalent to the mid-20th century nuclear scare. The movie tells the story of Curtis, who begins having visions of deadly storms and, to the dismay of his family, proceeds to spend all his time and money building a storm shelter.

As a film about contemporary anxieties, Curtis’s visions could symbolize a number of fears, but it’s not hard to tell which is the most pressing and obvious one. Throughout the film, Curtis repeats his warnings, continues his plans, and his demeanor in doing so can only be described as paranoid. Yet we all live with the prospect of similar threats and what’s most worrisome, then, is how we seem a little less crazy every new day that we repeat them.

After An Inconvenient Truth: the evolution of the 'climate change film' | Film | The Guardian
.
.
.
Posted by Jeremy Woodward at 14:11