... the latest Herald has reported that 'a ruling is now likely to be made in the new year after new evidence has been considered': 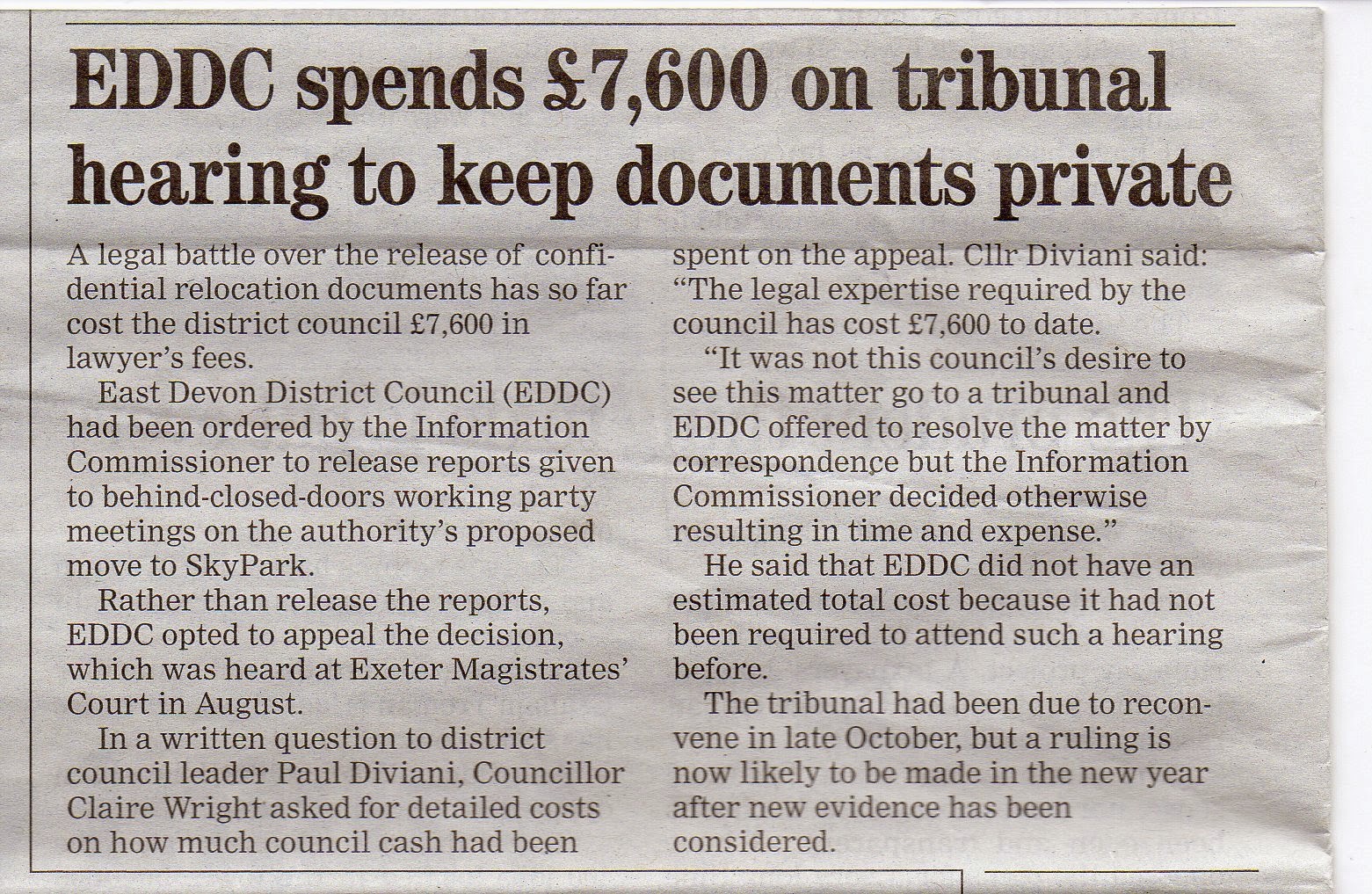 ... and this week's Express & Echo gives a helpful summary of the case:


The outcome of a tribunal which examined whether East Devon District Council should publish reports regarding its relocation project is not expected until at least the end of January.

Following the hearing at Exeter Magistrates Court on August 28, further written submissions were made and at the time, a four week wait was expected.

However the legal process has instead continued beyond four months, and due to legal sensitivities the authority has not been able to give any details as to why.

In September, a spokesperson for the council said: “As we are in the middle of an ongoing legal process, it would be speculative and inappropriate for us to try and tie the tribunal down to a decision date.”

The hearing was the result of the council appealing against the Information Commissioner’s decision that it should have disclosed certain information as a result of a Freedom of Information (FOI) request made by Sidmouth resident Jeremy Woodward.

In February 2013, Mr Woodward requested all internal correspondence between council officials regarding the office relocation. This, and requested minutes from Office Relocation Working Party group meetings, were refused.

However the commissioner ruled that reports written by an outside consultant were not covered by exemptions and should be revealed.

Deputy chief executive Richard Cohen told the First Tier Tribunal at Exeter Magistrates’ Court that the role of the author of the reports, project manager Steve Pratten, who works for Davis Langdon LLP, closely resembles that of an officer and therefore the contents of his reports should not be disclosed.

After the hearing, district and county council ward member for Ottery St Mary, Councillor Claire Wright who attended, said she thought it was “ironic” an independent consultant was “akin to a member of staff”.

The tribunal heard that Mr Pratten is “totally embedded” in the council, as no consultant has ever been before – he works from the council offices with “unfettered access” to the council system in order for him to do his job which is to advise the council on how to achieve “best value” with regards to the relocation costs.

The tribunal also heard that his reports were “arbitrarily” headed with the company’s name yet there were next to no “quality control” checks made on the reports for the council, which were signed off by the deputy chief executive.

The was told that it is the view of both Mr Pratten and the deputy chief executive, that if the contents of his reports were to be revealed then “significant harm” could be caused to the council and third parties and the “entire project could be jeopardised” due to the commercially sensitive content.

At the hearing, speaking on Mr Woodward’s behalf, Richard Thurlow, who is the chairman of the Save Our Sidmouth campaign group, accused the council of an inadequate public consultation. A brief section of Mr Woodward’s evidence was quoted – he said the public has been given “scant” information about the project.

Defending the council, Mr Cohen added: “There’s been a variety of different routes the public could engage with us and an extensive and varied range of public consultation activities. But there have been constraints due to commercial confidentiality that we’ve had to work within, but we’ve done as much as we can to engage.”

He confirmed there have been two strands to the project; the relocation exercise and the planning application for the redevelopment of the Knowle site, which was refused by the council’s Development Management Committee in March 2013.

Mr Cohen said the council’s frequently asked questions section on their website was kept updated, it had issued numerous press releases and newsletters, and with reference to the planning application, three public consultation events in Sidmouth.

Mr Thurlow, added: “The reason Mr Woodward submitted the FOI was because of the lack of information being given to the public and concern over decisions being made.”

I will go along with everything Paul-F has to say, but sadly officers of a council are running the show, not councillors. It is endemic and until people wake up to that fact - nothing will change.

I believe that it was also recently reported that Mr Cohen included land in the Knowle sale contrary to explicit instructions from councillors.

Neither of these actions are, in my opinion, appropriate for a paid officer, however senior - and Mr Cohen should be held to account for these actions which were not authorised by Councillors.

However Roverdale does have a point - recently there have been a number of examples where several senior officers have appeared to be acting as if they were the ultimate decision makers - arguing or even refusing to accept the decisions of councillors. This really should stop.

And councillors e.g. on the Overview and Scrutiny Committee are not accepting that it is their responsibility for decision making and are not holding officers to account as they should.

Of course, it is somewhat difficult for the rank-and-file councillors to hold the council leadership to account if they are themselves kept in the dark i.e. with the recent tri-partite agreement where even Tory councillors were unaware that it was in the offing until the deal had already been signed and press releases issued - indeed many of them found out about it from a local democracy campaign blog rather than from their own leadership.

All-in-all it is becoming quite a scandal - leadership who make decisions unilaterally rather than taking them to council for a decision and who refuse to be accountable to their own council, councillors who refuse to be accountable to the electorate and who fail to hold officers to account. Its a mess - but hopefully one which will be resolved by a change of control after the next local elections.

It is up to councillors to decide whether or not to publish the outcome of the tribunal. Officers of the council have no say in the matter. If councillors decide not to publish, the electorate should be asking every councillor - why not? Officers are employed by the council and give advice, councillors are elected and should challenge any advice given whether for good or bad. That's how democracy should work, lets see it working.

This was picked up today by the EDA blog - which posed a question:

Readers will be aware that only 2 “public consultation” events have ever neen organised regarding Knowle relocation – a very brief and rather uninformative event in Sidmouth and a highly stage-managed “stakeholders meeting” at Exeter Airport.

Why are we not surprised?