A really interesting project which hopes to get off the ground with some crowd-funding: 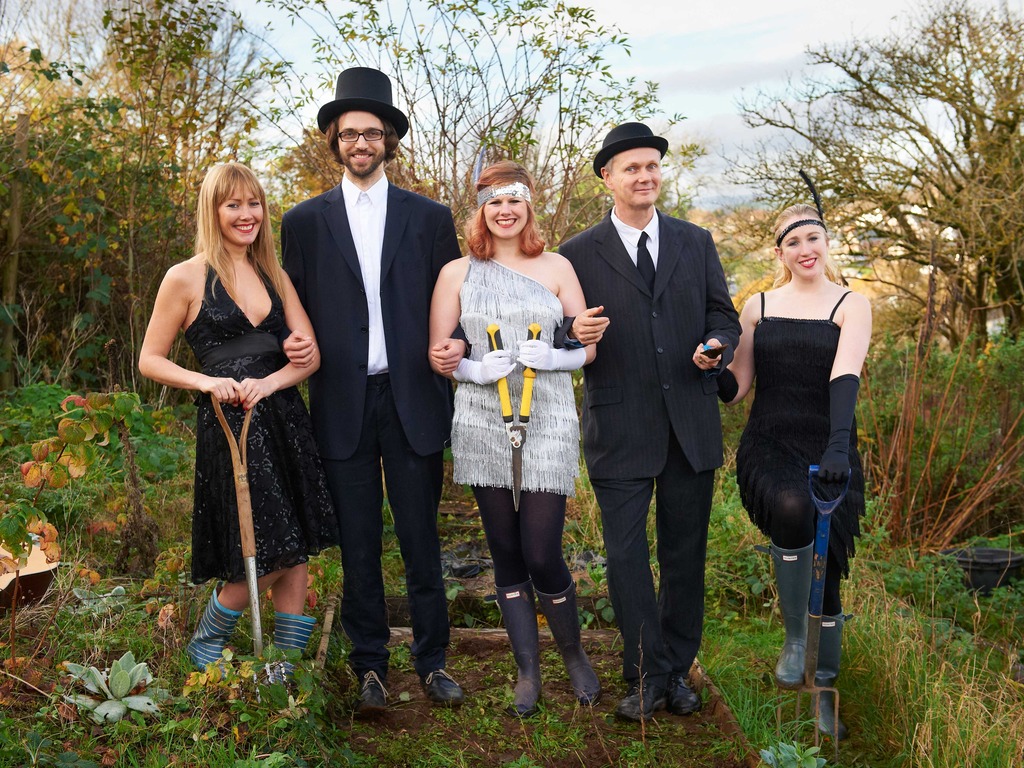 Transition Town – The Musical is the working title for a sparkling new musical by Matt Harvey and Thomas Hewitt Jones. The team behind Rumpelstiltskin, this year’s hit Christmas show at The Egg Theatre, Bath.
How can we possibly hope to do justice to such a diverse, ambitious worldwide movement in a musical? How can we not misrepresent it? The answer is: we’re not sure – but we intend to misrepresent it as accurately as we possibly can, and we believe that to celebrate is not to trivialise but rather to acknowledge that here is something worth making a song and dance about.
We don’t yet know the particulars of our story – the Transition movement is alive with stories – the plan is to weave a witty, warm-hearted tale of dreamers and do-ers addressing the practical, emotional and philosophical questions thrown up by climate change and oil dependency. They’ll forge friendships, fall out, make-up, and do it all to catchy tunes and big dance numbers. We want to hear generational sing-offs, a Hedge Fund chorus, meet a SWIMBY* protest group, and create a joyous, uplifting musical that brings a bit of Broadway to raised beds everywhere.
We want, along the way, to communicate the breadth and ambition of the Transition movement – to show that resistance is fertile, a half-full glass can be rose-tinted and, crucially, that if you reach for the stars you might just get to the pub.
This musical will be written for schools, amateur dramatic groups, Transition groups – in fact any group to that wants to engage their wider community in the challenging questions facing people across the world – in a friendly, uplifting and inspiring way.
We hope to introduce some of the principles shared by the Transition Movement and tell a very human story of change. We have been particularly inspired by Transition events and initiatives in our own towns.
*SWIMBY: Something Wonderful In My Back Yard**    ** this might make a good alternative title!
"When Matt first mentioned the idea of "Transition Town: The Musical", I couldn't help laughing. There was something silly about it, but at the same time something rather wonderful. Doing Transition has many of the elements of great musicals: drama, moments of high tension, highs of great choral unity, moments when it all locks in beautifully and it feels more exhilating than anything else, and the fact that it needs a whole cast, not just one or two heroes. This is something designed to be performed by communities, and I really hope it becomes the 'Billy Elliot' for community activists, the 'We Will Rock You' for community energy, and the 'West Side Story' of rooftop gardeners. The world needs this musical. Please support it!".

We hope to launch this project in March 2015 at an event in Totnes (Devon, UK) where we will invite supporters and anyone who’s interested to come along and meet the team, hear Matt and Thomas perform some of their material and share stories.
Over the following months Matt & Thomas will visit 5 Transition groups to research and gather material for the musical in small and lovely celebratory gatherings where we will invite groups to share their stories with us.
Matt & Thomas will then develop this material and will share some of the early stage stories and songs and an event in Autumn 2015 at The Ariel Arts Centre at KEVICC (King Edward VI Community College in Totnes). This will be an opportunity for friends and supporters to hear material for the first time and offer their thoughts and suggestions about future development.
During 2016, school and community theatre and music groups around Totnes will be invited to work on material with the guidance of an artistic and musical director (who we still have to find) in time for a premiere of the final show in July 2016.
After the premiere, a license to perform the show will then be available for use by other groups.
We hope to produce:
Throughout the project we will invite people to get involved:
Background:
Matt Harvey lives in Totnes which is recognised today as the place which the Transition Movement first popped up. Matt has been an encouraging voice and outspoken supporter of a number of the activities that have cropped up through the work of thousands of the town's inhabitants.
Recently Matt was poet in residence at Regen SW where he explored some of the questions around energy in his inimitable and inviting style producing ‘The Element in the Room’ - A collection of 30 poems inspired by renewable energy which has a foreword by the wonderful Jonathan Porritt. You can get a free e-copy of the book from www.regensw.co.uk
Thomas Hewitt Jones is an award-winning composer, winner of the 2003 BBC Young Composer Competition. He composed and produced the music for the four animated Mascot Films for London 2012 Olympic and Paralympic Games.