On the full purchase of the Drill Hall in 2012, the District Council committed itself to 'full regeneration' of the area:

THE LATEST tangible step towards a future regeneration of the Port Royal area of Sidmouth was taken this week, when EDDC took over ownership of the Drill Hall.
The Council has invested over £600,000 in providing alternative premises for the Army Cadet Force on a site at Chambers Close in Sidmouth as part of a wider plan to improve the eastern end of the Esplanade.
The first priority, once the Drill Hall site had been legally transferred to the council, was to make it safe. Expert operatives will move in very soon to strip out all the asbestos materials from the hall. And EDDC’s Property Services team has already submitted a planning application to demolish the hall and level the site.
No firm plans for Port Royal have yet been formulated, but in the short term the Council proposes that the Drill Hall site should be used as a boat storage space and so free up the Esplanade footpath, which is often cluttered with boats pulled up off the beach to avoid damage in winter storms.
Documents filed with the planning application state that the cost of repairing and converting the building would be “extremely prohibitive”, especially as the fabric of the hall includes “a significant quantity of asbestos containing materials”.
The longer term aim is for a comprehensive regeneration scheme for the Port Royal area. It is anticipated that work will start on preparing a plan for the area in the New Year.
It was back in March 2007 that EDDC’s Executive Board sanctioned a proposal to provide a replacement hall and rifle range at Chambers Close, in return for taking ownership of the Drill Hall.
As negotiations with the Wessex Reserve Forces and Cadet Association progressed, and new state-of-the-art premises at Stowford were completed, EDDC Members agreed in November 2011 that the old hall should be demolished.
Unsafe
This was because the building was considered unsafe in its current condition and would need significant sums spent on it to make it safe and protect it from vandalism. A budget of £48,038 was agreed for demolition.
Devon and Somerset Fire and Rescue Service had raised concerns about the safety of the structure and the possibility of arsonists gaining access to the hall and causing damage to the building and surrounding properties.
The application to the Planning Authority for permission to demolish the hall and use the site for boat storage in the short term has this week been advertised in the Press. Site notices have been posted and neighbouring organisations – including Sidmouth Lifeboat and the Sailing Club – have been informed of the proposal.
There will now be a three-week consultation period during which time the public and all statutory consultees can comment on the proposal, which is expected to be considered by EDDC’s Development Management Committee in January.

There were fears that the purchase of the Drill Hall would simply be a prelude to demolition:

Dear Mr Williams
We have today been informed of EDDC’s plans to demolish Sidmouth Drill Hall and replace it with a car park.
As a building that has ben as essential part of Sidmouth’s community activities for over a century, including staging a significant number of live music and dance events, we strongly urge EDDC to reconsider. Closure of this historic building would be a great loss to local musicians, audiences and residents alike – indeed, one of the South West’s most high profile musicians and MU member, Show of Hand’s Steve Knightly, played his first ever gig there.
Live music venues of the nature of the Drill Hall provide an essential entertainment platform for the benefit of residents and visitors alike, generate income and publicity for the area, and provide opportunities for both up and coming and established artists to perform and hone their craft from grassroots level upwards. If EDDC’s plans are implemented the legacy of this loss would be keenly felt, and an historic and irreplaceable venue would be lost forever.
The Musicians’ Union strongly oppose EDDC’s plans and urge the Council to reconsider.
Paul Gray
We urge members to express their support by writing to East Devon District Council.
Posted: July 6, 2012

The valley's District Councillors have long campaigned for a full development brief for Port Royal, including the Drill Hall:

We will call for a full development brief for the whole of the Port Royal site, in consultation with Sidmouth Town and East Devon District Council. We will thoroughly examine this to ensure a suitable and beneficial development takes place and incorporates a full redevelopment scheme suited to the surrounding area.
www.devonconservative.org.uk

The Drill Hall was given a 'say of execution' - and since then, the community group 'Save Sidmouth Drill Hall' have been working on alternative plans for the building:

An aspiration for the first phase redevelopment of Sidmouth's Drill Hall. Image by Alex Vick.

CAMPAIGNERS fighting to save an historic Sidmouth venue look set to be given until at least next summer to come up with a ‘viable’ proposal.

An aspiration for Sidmouth's Drill Hall. Image by Alex Vick.
Friends of Sidmouth Drill Hall are looking to persuade owners East Devon District Council (EDDC) to grant them access alongside a fixed term ‘peppercorn rent’ that will see it used once again. It is even hoped the 119-year-old premises could be ‘symbolically’ opened on August 4 for a public event to mark the centenary of the outbreak of the World War One.
The group feels it has made little progress with EDDC since the premises were given a stay of demolition in March last year.
“We’ve really got to start over again,” said Matt Booth, who leads the community interest company (CIC) behind the plan. He hopes EDDC will give the group its blessing to pursue its plans for a ‘first stage’ of redevelopment.
“The CIC would then be in a position to look to raise an amount of investment to carry out an initial stage of redevelopment that would be easily recoupable,” said Mr Booth. “This would mitigate any losses should a genuine proposal for redevelopment of the Port Royal area materialise. Were that to happen, the CIC would not oppose it so long as any plans were put to the people of Sidmouth.
“It has always been our position regeneration of the area should start with current assets and that it benefits no-one to maintain the situation as it has been for 20 years.
“A staged redevelopment of the Drill Hall, that would see it open and operational now, would populate and energise that part of the seafront, support Port Royal and the surrounding clubs, businesses and buildings, and inspire a number of new activities there that would benefit Sidmouth as a whole.”
Short and long-term visions for the hall have been drawn up by Sidmothian Alex Vick, who works for an architectural design firm in London.
An EDDC spokesman said: “The council’s view was that the ageing and ailing Drill Hall would be a hindrance to, rather than a positive feature of, a potential [Port Royal] redevelopment. We agreed to give Mr Booth time to investigate funding sources and come up with a convincing business plan. We resolved to wait for that plan to materialise.
“No time-scales were agreed but we knew it was possible he would need up to two years to seek and find the necessary financial backing. The opportunity for that business plan to be produced is ongoing. While this may take the outcome beyond May 2015, the only reason is to give the community group the time they need to make their proposals viable.”
Council marks time on old Drill Hall blueprint - News - Sidmouth Herald

To help this process, members of the public are now being invited to become 'Friends of Sidmouth Drill Hall':

Become a Friend of Sidmouth Drill Hall
‘The Territorial Drill Hall, at the Salcombe end of the Esplanade, erected in 1895 on a site given by the late J. George G. Radford, is a neat edifice of red brick, and has on the ground floor a drill hall, 60 by 32 feet, with a clock over the entrance; the building also includes an ante-room, and an armoury.’ (Kelly, 1914)
The land was donated to the town by Mr George G Radford and Mr and Mrs R Hatton-Wood of ‘Belmont’ advanced money for the building work, £1,650. The building was opened on Tuesday 15th October 1895.
In October 1903, Mr and Mrs Hatton-Wood presented the deeds to the Rifle Volunteer Company, which had been formed in 1883, wiping out the remaining construction bill of £600.
Throughout the 1900’s the Drill Hall was used as a cinema, a site for sports including badminton and ice skating, a dance hall, a live music venue, and the on site office of the Sidmouth Folk Festival.
The Drill Hall was closed in 1994 and has been boarded up since.
At a meeting of East Devon District Council’s cabinet in November 2011, council members approved a motion that the building be demolished and a car park built on the vacant site.
The cabinet allocated a budget of £48,038 to demolish the building.
A local campaign group was formed and in March 2013, EDDC removed their application to demolish the building.
Following the withdrawal of the demolition of the building, the campaign group has worked to raise awareness of the heritage of the building and the east end of Sidmouth seafront, and in particular the fishing and coastal history of Sidmouth. In November 2013 the group registered as a Community Interest Company (CIC) in order to work on a range of community projects linked to fishing and the sea, and ultimately towards the redevelopment of the Drill Hall. The two main current areas of activity are the European Union funded TourFish project, and Sidmouth Sea Fest from which Sidmouth Drill Hall Hub CIC carries out a number of community support projects.
This is the website of Sidmouth Drill Hall Hub CIC. 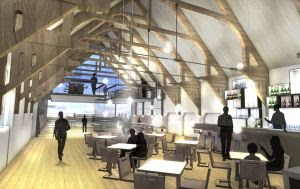