Climate change: and the increased risks of global conflict ... the evidence ...

Whilst there is political confusion still in the United States over climate change, it seems that the American military is very clear about the threats it could herald:

Will climate change trigger a WAR?

By JONATHAN O'CALLAGHAN FOR MAILONLINE
14 November 2014 |
Climate change could increase the number and severity of global conflicts, according to a report from former US military generals.
This is because it might make certain regions uninhabitable, and it will also open up more trade and military routes between countries.
In a report published this year they explain how a warming climate may have implications for national security, and they believe action needs to be taken. 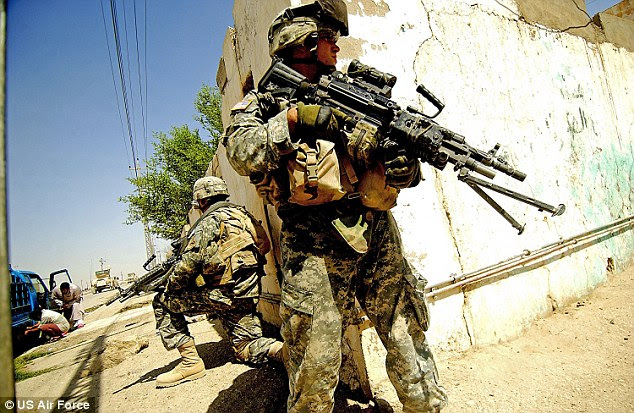 +3
A report by former US military officials says the US should prepare for security issues from climate change (stock image shown). Environmental changes could increase the chances of threats. Poverty, population migration and more could raise the chances of conflict,
In the report, titled National Security and the Accelerating Risks of Climate Change, the CNA Advisory Board - a group of retired officers from the Army, Navy, Air Force and Marine Corps - said there could be upcoming threats associated with climate change, reports Forbes.
They expressed surprise that climate change remains such a polarising issue, despite being widely accepted as a problem that must be addressed sooner rather than later.
They continue: ‘The potential security ramifications of global climate change should be serving as catalysts for cooperation and change.’‘We are dismayed that discussions of climate change have become so polarising and have receded from the arena of informed public discourse and debate,' says the report.
‘Instead, climate change impacts are already accelerating instability in vulnerable areas of the world and are serving as catalysts for conflict.’
They say that actions taken by the US and the international community have been insufficient to deal with the projected effects by climate change.
These, they say, could increase things such as poverty, environmental degradation, political instability and social tensions - ‘conditions that can enable terrorist activity and other forms of violence.’ 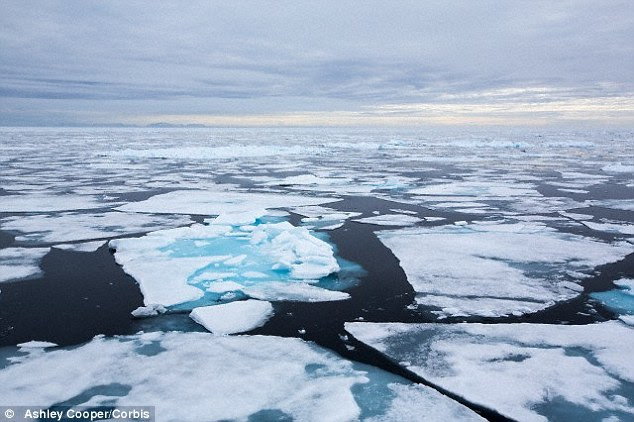 +3
The report also says melting Arctic ice (stock image shown) could open new military and trade routes. It could lead to 'conditions that can enable terrorist activity and other forms of violence' 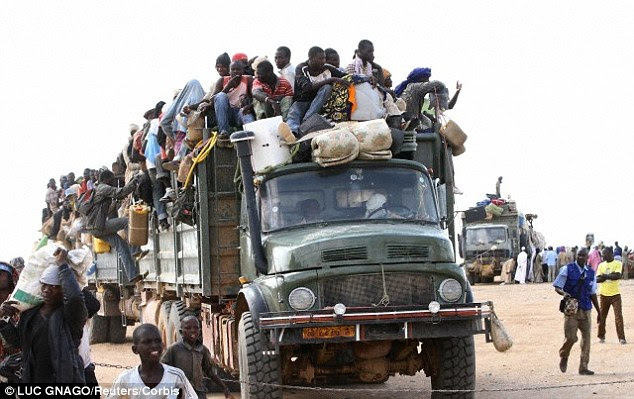 +3
The report says that actions taken by the US and the international community have been insufficient to deal with climate change. Extreme weather is already causing prolonged droughts and flooding, resulting in food shortages and population migration (stock image shown of immigrants fleeing unrest in Libya in 2011)
They explain how in areas such as Africa, Asia and the Middle East, the impacts of climate change are already being seen.
Extreme weather is causing prolonged droughts and flooding, resulting in food shortages and population migration.
And in particular they say the projected impacts of climate change ‘could be detrimental to military readiness, strain base resilience both at home and abroad, and may limit our ability to respond to future demands.’
The report recommends that the US should take a global leadership role in preparing for climate change.
And they should also prepare for the potential to carry out increased military operations in the Arctic as ice begins to melt.
This may open new routes between countries - such as Alaska and Northern Europe - that may change how military can be deployed.
Read more:

The Pentagon says wars could become more commonplace because of climate change (Source: Flickr/US DoD)
By John McGarrity
US military chiefs have warned climate change is becoming an increasing risk to global security, providing further pause for thought among the Washington political establishment sharply divided on how to tackle global warming.
In a report published every four years that outlines future threats to the US military’s interests and potential global flashpoints, the Pentagon said climate change is a “threat multiplier” and would be a major area of future defence strategy.
“The pressures caused by climate change will influence resource competition while placing additional burdens on economies, societies, and governance institutions around the world,” said the report, which was published earlier this week.
The US Department of Defense added that climate change could worsen poverty, environmental pollution, political instability, and social tensions, “conditions that can enable terrorist activity and other forms of violence.”
This analysis from the normally conservative US military echoes aview of the IPCC, the UN’s scientific panel, that a changing climate could make wars and regional conflicts more likely.
Another UN agency warned earlier this year that increasing conflict and land disputes in the arid Sahel region of north-west Africa had been driven partly by shortages of food and crops in region caused by a changing climate.

A US Sea-Hawk delivers relief supplies to survivors of Typhoon Haiyan in the Philippines (Pic: US Navy)
The Pentagon report said the Sahel is one of the areas where the US is carrying out missions to thwart Islamist militias that have become a growing threat to security in the region.
Last year France had to send troops and munitions to Mali in order to stave off a potential takeover by northern militants, and the prospect that water and food resources will become more scarce because of climate change could destablise the region still further, aid agencies have warned.
Although the US military didn’t identify specific regions as making water wars more likely, previous studies have identified central and southern Asia could become increasingly unstable because of potential for water shortages in northern India and Pakistan and competition among former Soviet Republics.
Even in the US itself, tempers flared last year between states on who should have access to water supplies amid high summer temperatures and a sustained drought, a reminder that even in rich countries access to world’s most basic commodities can become increasingly fraught.
However the US military’s report did pinpoint the Arctic where increased co-operation would be necessary as the world’s climate changes, referring to last year’s Pentagon study of the region that highlighted increased risks of disputes about territory, oil and gas reserves and shipping routes as ice caps melt.
Complex link
Besides warning of the geopolitical risks of climate change that could suck up more of the US’ military resources, the Pentagon’s climate study also highlighted the operational risks that water scarcity, rising sea levels and extreme weather could have on day-to-day operations and its bases.
Officially, the US has major installations in around 30 countries worldwide, but unofficially is active in many more countries besides, including arid areas of the Middle East and Africa.
The Pentagon’s warnings won’t necessarily get a warm reception from the military’s strongest supporters on Capitol Hill, as Republicans are divided on the causes of climate change and what to do about it.
And some security experts say the relationship between changes to climate and conflict is highly complex and have cautioned against an oversimplified link between the two, pointing out that there are many other causes of wars and regional dispute than climate and resources.


On the other hand, perhaps we should be less sensationalist: Commentary versus evidence in the climate / conflict debate