Last week, the Communities Minister Stephen Williams announced a new £6 million funding boost to the Community Rights programme to encourage local economic regeneration:
Futures Forum: More funding for Community Rights >>> “This Government has trusted local people and given them new rights, introduced by the Localism Act, so they decide how to run their community."

The writer has looked at other 'new ideas' on economics:
David Boyle (author) - Wikipedia, the free encyclopedia
David Boyle 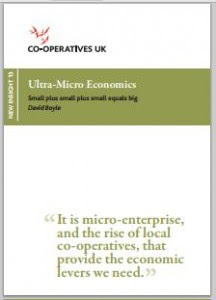 In the heady days of the Thatcher government, when the hideous mistakes of Big Bang were being forged and coming to fruition, I used to run an excellent magazine called Town & Country Planning.  In those days, we were extremely exercised by the idea of the huge and mounting cost of rundown private sector homes. Who was going to repair them?
We don’t talk about that problem any more. This is not because it was ever exactly solved, but because of one of the more benevolent effect of rising house prices, before the oligarchs came in, was that it made a bit of DIY worthwhile. Instead of the government shelling out to repair all those privately-owned dwellings, the young owners went down to B&Q and bought a paintbrush.
It was a lesson to me that neither the conventional public sector nor the conventional private sector may be best placed to tackle the really intractable problems.  And it makes me wonder whether the great unanswered questions about rebalancing the economy might eventually be answered – not by the long night of the soul as we wait for the Treasury, but by the places themselves.
END_OF_DOCUMENT_TOKEN_TO_BE_REPLACED

David BoylePolicymakers have been reluctant to adopt ultra-micro projects, but they are an antidote to the failed 'trickle-down' model

Don't look now, but the political language is changing. Once, the phrase "rebalancing the economy" was the cornerstone of coalition economics; shifting energy from finance to manufacturing, from big to small, from London to everywhere else.
Now, I notice, it has come to mean little more than reducing the UK trade deficit, which is not the same thing at all. But don't let's lose the previous meaning entirely, because it stood for something important. We still need to rebalance the economy. What we lack is a formula to regenerate cities and towns using their own resources, without having to wait around for the outside investment or government grants that never arrived.
This is the missing element of rebalancing we've never quite developed. It would mean better using the money that is already flowing through the community. It would mean using the wasted land, people, buildings and waste material, putting them altogether and – shazzam! – the wealth appears. Well, not wealth exactly, but enough economic activity to claw back some of their economic destinies.
The difficulty is that these economic techniques exist, but in the UK at least are in their earliest stages – usually based on community banking or community energy generation.
We can catch glimpses of what is possible in the efforts of local authorities such as Enfield or Preston, looking at different ways of doing procurement. We can see it in the development of linked local food businesses in Vermont, or the community currencies for women entrepreneurs being introduced by the Brazilian central bank.
We need to develop these ideas, and I set out how in my report Ultra-Micro Economics, published today by Co-operatives UK – because the prize is worth winning. It would be a genuine antidote to the trickle-down effect on which most economic policy is still based, even though most evidence suggests that wealth tends to hoover up rather than trickle down.
There is evidence that these techniques might work a good deal better than traditional regeneration, shifting the poor out and selling their homes to the rich. But there are three important blockages.
First, our institutions of regeneration, from the energy intermediaries to the high street banks, are designed for big institutions and find it hard to connect with small players. Try helping your village generate its own energy and things get difficult.
Second, there is a blind spot about economic regeneration in most local authorities. They don't see it as their business, and this kind of learned helplessness – passive in the face of whatever disasters the global economy might throw at them – has been carefully nurtured by the Treasury for a generation, terrified of the spectre of the Bank of Our Friends in the North.
Third, there is a kind of snobbery among economic policymakers about it, as if ultra-micro was all a bit too small to matter. Economic strategy has kudos and status; looking at money flows on the ground and how to make money connect more locally isn't what they imagined doing. Money flows? It's too much like plumbing for comfort.
The government's City Deals are a good start, though the most ambitious local projects have had to be forced through a reluctant Whitehall. But the real lesson is that small-scale matters.
One of the ultra-micro heroes, Pam Warhurst of Incredible Edible, said, for example, that the "government will spend millions of pounds on a campaign to eat five a day". Instead, the local GP centre in Todmorden used wasted scrubland outside to encourage people to plant vegetables and fruit for everyone to use. "It helps if you don't ask permission," she said.
The ultra-micro approach transcends conventional right and left, just as it goes beyond the conventional distinction between free and controlled markets. But the real argument is about scale, if enough people and places are doing this. Because, as they say in America, small plus small plus small plus small equals big.
The UK government must think small to bring about big economic change | David Boyle | Comment is free | The Guardian

David Boyle also campaigned against Clone-Town Britain:
In Britain, like the US, the out-of-town shopping giants are dying | David Boyle | Comment is free | The Guardian
Futures Forum: New Economics Foundation: Clone Town Sidmouth? >>> "The towns most dependent on the biggest chains and out of town stores have proven to be most vulnerable to the economic crisis."

He has just finished work on a newly-commissioned piece:

The future isn’t so much local, it is small 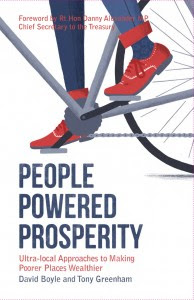 Danny Alexander started all this.  He asked me, back one day in 2012, about how local economies could find levers to regenerate themselves – rather than waiting around hopelessly for outside investment that never came (that isn’t how he put it).
The result was a dialogue between the Treasury and the local economic regeneration activists – local bankers, local energy organisers, local procurement advocates, local currencies – which revealed, it’s fair to say, something of a gulf between them.
As a result, and thanks to some funding from the Friends Provident Foundation, I have been organising a project to translate between the two – so that they at least understand each other.
I hope it will also form a narrative, once cities and places have more power, which can support their own economic efforts.  If you devolve powers from Whitehall, it makes no sense for them to carry on handling your whole economic destiny on your behalf.
END_OF_DOCUMENT_TOKEN_TO_BE_REPLACED

Opinion: The future isn’t so much local, it is small

Towards a people-powered prosperity

The trouble with economic recovery is that someone else always has to do it – the bankers, investors, industrialists or mandarins.  What about the rest of us – and what about the places we live?  Are there no economic levers they can pull to improve their lives?
The trouble is that there is no communication, and little understanding, between the economic localisers and the mainstream national policy-makers, who are very sceptical about local economics – at least more local than LEPs.
People Powered Prosperity is the result of a project (thanks to the Friends Provident Foundation) to translate between the two worlds, interviewing a range of leading economists, including the Treasury, to see what was causing the logjam between central economic policy-makers and the energy of local economic activists.  The book is the result.
It sets out a new narrative for very local economics, based on local financial and enterprise institutions, which might be embraced by national politicians – and by the Treasury.  It is a potentially important intervention to kickstart a vital debate – about why mainstream policy-makers are so suspicious of revitalising local economies, the only basis for the real devolution of power.
The book also proposes two reforms:
You can download the book here: People Powered Prosperity (WEB).
New Weather Institute » Towards a people-powered prosperity

To translate these ideas to East Devon: