Earlier in the week saw the broadcast of the first in a series on the House of Commons:
Inside the Commons Lifting the Lid 1/4 2015 - YouTube 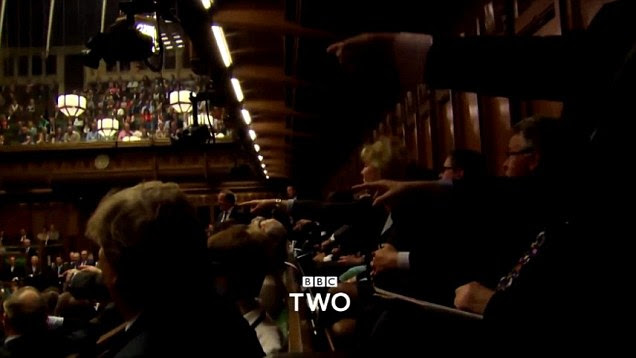 Why our boozing, show-off MPs could be in the Big Brother house: CHRISTOPHER STEVENS reviews last night's TV | Daily Mail Online
How embarrassing is the BBC's Inside The Commons for parliament's bigwigs?

Indeed, the general opinion was not very high - and this included dismay at the state of the building:

The shots of peeling paintwork and crumbling stone intercut with images of politicians being berks undermined our democracy faster than a Saudi arms deal.
Why Inside the Commons is the funniest comedy of the year - Telegraph

Indeed, the fabric of the building is particularly bad: 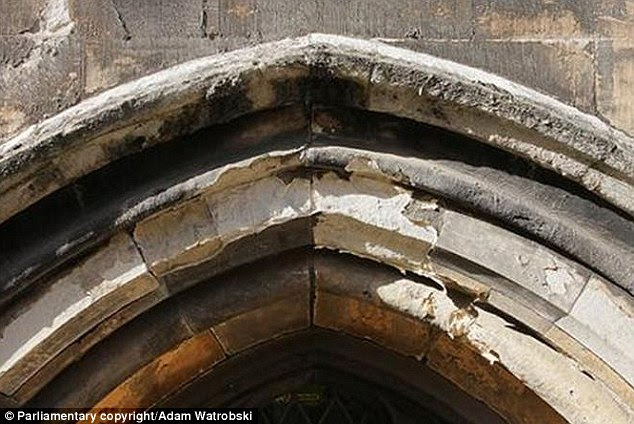 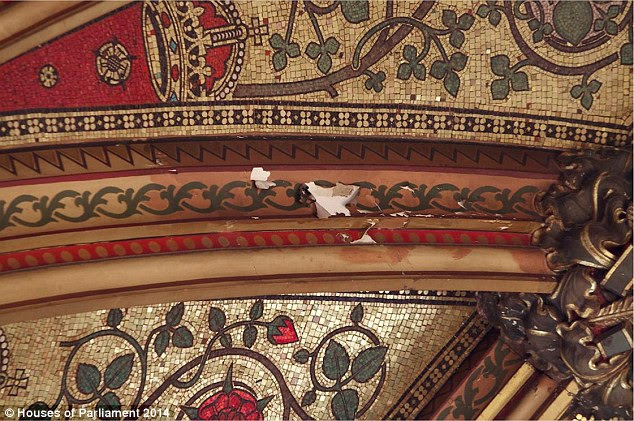 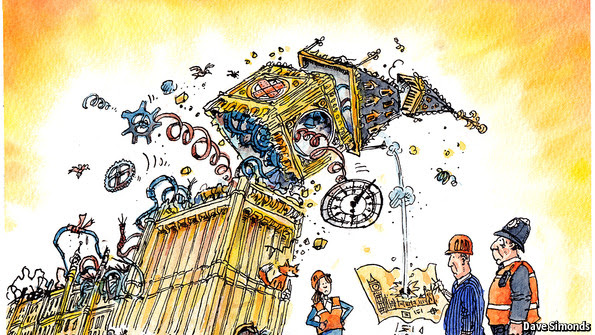 THE view from atop the “mother of parliaments” is not as uplifting as it might be. Gutters collect smelly pigeon carcasses half-chewed by the peregrine falcons that nest there. Three years ago a rooftop water tank collapsed, flooding the corridor below and drenching valuable paintings. The stonework looks more medieval than Victorian, so worn is it. To the north, the clock tower popularly known as Big Ben leans by nearly nine inches (22cm), rattled out of place by the Jubilee Line running beneath.
Repairing Parliament: Of mice and MPs | The Economist

Deteriorating Houses of Parliament could catch fire again, warn Parliament officials
Richard Ware, the director for the Restoration and Renewal Programme at the Palace of Westminster, says: 'The more things become antiquated the changes of a bigger crisis grow. It has already burned down once.'
The Palace of Westminster is in such a state of disrepair that it could burn down for a second time, senior officials in charge of a major overhaul have warned.
MPs are getting stuck in lifts and missing votes because of the scale refurbishment required at the Houses of Parliament, they said.
Part of the problem is that many of the building’s 3,000 windows of the building on the banks of the River Thames in central London will not close properly, further causing more damage to the fabric of the building designed by the architect Augustus Pugin.
Deteriorating Houses of Parliament could catch fire again, warn Parliament officials - Telegraph

The state of the paintings - going back to early Victorian times and the 'state patronage of the arts' - is also not good:

A correspondent writes to this blog:

I recall 30 yrs ago I was invited by the then curator there to examine the physical condition of the Victorian wall paintings to see if I could advise on their repair. While it was very interesting to see these I cannot recall being of much help as they were done in oils and suffering from long term moisture caused by the Thames.
It will be a mammoth undertaking.


A number of painting techniques were experimented with, but as rule you need a surface which is permeable, which before acrylics meant water base such as tempera or fresco. The HP artworks were either oils on canvas glued to the walls or painted directly on the plaster. The ones I saw were located by the river and in a distressed condition suffering from staining and peeling.

This passage is taken from a scholarly work on the artwork at Parliament:

The Houses of Parliament History of Paintings at the Palace of Westminster
State Patronage of the Arts
The earliest official public sponsorship of the arts in the UK was initiated soon after the burning of the old medieval Palace of Westminster in 1834. The need to build a new House of Parliament forced a programme of patronage on the Robert Peel government. Following the conflagration a commons committee was established under the chairmanship of William Ewart, the leading advocate for the cultural rights of the working class. The committee considered the relationship between the arts and manufacturing and agreed to set up the Normal School of Design. The view was that British prestige required art at its most sublime, and if high art was encouraged to flourish, then subordinate branches would receive “nourishment and strength”. According to the committee, public patronage avoided the danger of “individual ostentation”, without depriving the nation of the “beautiful and magnificent”, for without which why train artists in the academy schools? Above all, there was profound conviction that the fine arts were “capable of eminently subserving the progress of morality”. The report recommended fresco paintings; “the highest branch of the visual arts” should be given official priority.
In 1841 a select committee was formed to consider “the promotion of fine arts of this country in connection with the rebuilding of the House of Parliament.” This resulted on one of the most ambitious attempts at state patronage producing a series of wall paintings and decorative embellishment throughout the palace. Frescoes were strongly recommended by William Dyce, the respected director of the Government School of Design at Somerset House and a competition was organised for cartoon sketches depicting the History of Britain. As well as taking into account the decoration of the new Palace, the committee reassuringly concluded “independently of the beneficial and elevating influence of the fine arts upon a people, every pecuniary outlay, either for the purpose of forming or extending collections of Works of Art in this country, has been directly instrumental in creating new objects of industry and of enjoyment, and therefore in adding, at the same time, to the wealth of the country”.
The Houses of Parliament History of Paintings at the Palace of Westminster Edited by M H Port YALE University Press 1976.
Palace of Westminster - Wikipedia, the free encyclopedia

Now, considerable funds have been committed to restoring and renewing the building:

For example: the wallpaper:


The main Council Chamber is wallpapered with Gothic Lily Wallpaper designed by Walter Pugin:
o The design of the tiles in the second fireplace on the 1st floor of Knowle ‘may be relevant to that of the striking wallpaper in the Knowle Council Chamber. It was designed by Walter Pugin (1812—52) for the House of Lords and was printed from his woodblocks which still survive in the care of Cole and Son.’
English Heritage > ARTISTIC INTEREST 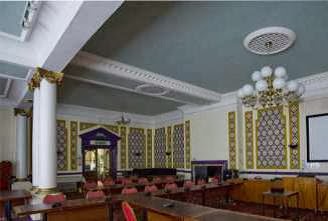 Futures Forum: Knowle: SAVE Britain's Heritage
SAVE Britain’s Heritage – Letter of Objection | Save Our Sidmouth

When thinking about the asset value of the HP compared to the Knowle, one should take into consideration the beautiful park setting, garden terraces and natural habitat as well as the Victorian building and its furnishings. Such a heritage asset is steadily increasing in value, while say a new HQ shed on a remote industrial estate, would rapidly decrease with a very poor sale return.
.
.
.
Posted by Jeremy Woodward at 14:46