Coexist hosts Hamilton House as a space in which we collectively live, work, play and innovate to create a better world for each other, our community and the environment.

Hamilton House was a vacant and neglected office block for many years. In 2008 the owners, Connolly and Callaghan invited a group of friends to create a centre for the community. Ever since, Coexist has been working hard to create a space in which the community can grow, share, collaborate, and learn what it is to live in coexistence with each other.
We have grown organically and will continue to do so, open to respond to what is needed by the community within and without the building. Our direction and action has a single purpose – to support innovative solutions for all. This means personal, social and collective, within and without the space we facilitate, and for current and future generations.

Coexist is a social enterprise, setup as a community interest company based on a philosophy of open hearted and active engagement. We empower members of the community on Stokes Croft to lead its development and have incubated new creative projects and social businesses from conception to sustainability. We believe that the successful and much needed regeneration of our community is sustainable only if the growth is organic and from the bottom up!
Coexist believes in being the change we wish to see in the world. We don’t think this is a hard task. In fact we are seeing that it can be done. We are all already entirely capable of innovation, of clarity and to effortlessly coexist with ourselves and each other. Each of us is a pioneer. Each of us has a unique contribution to the whole. Each moment is ours to make the most of. Here, coexisting naturally, we see that together we are capable of so much.

Hamilton House currently hosts over two hundred tenants as a part of this vibrant community, including: painters, designers, illustrators, textile designers, environmental groups, charities, music agencies, festival organisers, radio stations, animators, film and music producers, community groups, social enterprises, upholsterers, weavers, costumiers, record labels, dance groups, alternative therapists, career advisors, consultants, architects, fashion and accessory designers, street artists, writers, puppeteers, jewellers, photographers, clown troupes and all sorts of food, arts and health activists.
We are open seven days a week offering community space, meeting rooms, events and exhibition spaces. We also run the Coexist Community Kitchen, InAlignment Dance Studios, the Wellbeing therapy centre. The Canteen and Bristol Bike Project can be found here, you can rent studios or offices, or join our co-working/hot-desking community in the Hamilton Hub.
Come along and see for yourself…
Coexist would like to thank everybody who has supported Coexist since its conception and especially our partners Connolly and Callaghan for continuing to support the Hamilton House project to achieve its long term social, environmental and financial sustainability.
If you’d like to read our core purpose CLICK HERE

Of course, Sidmouth is not Bristol, a place famously brimming with artistic talent

But Sidmouth will be welcoming some people with ideas for 'creative development' during
Climate Week next month:

Here's the latest news from Totnes:

Atmos supporters at the development site

The team behind a groundbreaking new community development are feeling optimistic after the latest plans for the project got the thumbs up. Proposals for the Atmos development at the old Dairy Crest site in Totnes, South Devon, went on display to members of the public at the end of last month. The exhibition was the result of months of consultations with local people to establish what they would like to see the land and property used for.

Anna Lodge, from Totnes Community Development Society (TCDS) which is leading the project, said overall the ideas had met with an encouraging response. “The turnout was great – 250 came through the door to look at the plans, and at least half were new and engaging

with the project for the first time,” she said. “It’s really nice to get their support for the proposals, but it also serves as a really good reality check to make sure were are doing what the community want us to.”

TCDS is collaborating with the retirement home firm McCarthy & Stone to transform the site into a community hub. It bough the land from Dairy Crest for just £1, and has been working with local residents todevelop

plans for its use. Final designs will be submitted as a Community Right to Build Order (CRtBO) – one of the first in the country – in May.

Totnes residents will then be invited to vote on the order in a referendum, with a yes vote allowing work to begin in spring 2016. “We will have an extended consultation process throughout March to update the public on details and incorporate their feedback,” Ms Lodge added. “Formal planning

What do we mean by 'economic resilience'? 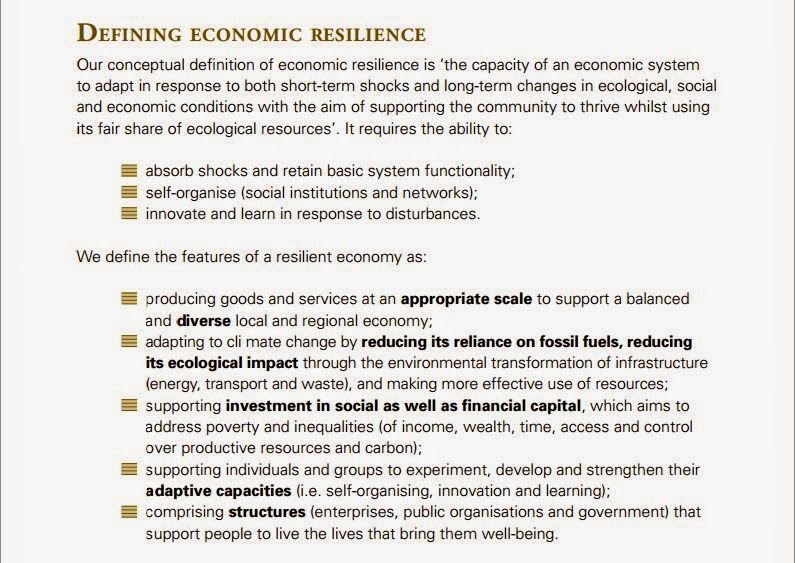 NEF has teamed up with the Transition Network - with support from Bristol's mayor - to create the 'Real Economy Lab': 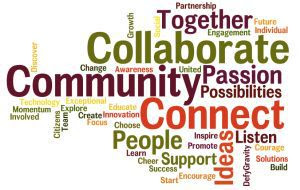 Recently Transition’s co-Founder Rob Hopkins responded to a critique of the Transition movement by Ted Trainer. Trainer’s critique was much discussed at the annual Degrowth Congress in Leipzig which I have blogged about already.  Trainer’s critique suggested that there is little more to the Transition Towns movement than community gardens. Naturally anyone who knows much about Transition will know that’s just not the case. And Rob has made a very good response to this already many times.
In this blog I want to share with readers an exciting piece of new work that Transition Network is part of and which illustrates just one way in which it this global movement is grappling with really complex big issues relating to the future of economics and the whole way we produce and consume, live and work.
The Real Economy Lab is a new collective enquiry and movement building initiative. The Lab is being led by myself working closely with Peter Lipman, Chairman of Transition Network, Tony Greenham, a Transition Network Trustee and the Head of Business and Finance at Nef (the New Economics Foundation) and Alice Martin of Nef. Its supported financially by the Swiss Fondation Charles Léopold Mayer/FPH and Nef.
The Lab responds to the context in which our current economic system is patently failing to work for the wellbeing of people and planet. It’s an economic system intent and reliant on exponential growth on a finite planet and on the concentration of power and resources into the hands of the few.
But the alternative future is already (partly) here, emerging in pockets of light around the world. Aside from nearly 500  Transition initiatives worldwide, there is a vast and increasing array of practitioning and thinking around what is being called the ‘new economy.’ As Professor Gar Alperovitz, a leading thinker and practitioner in this area, has recently said “just below the surface of media attention literally thousands of grass roots institution-changing, wealth-democratizing efforts have been quietly developing.”
This includes movements as diverse as the many members of the Post Growth Alliance and New Economy Coalition, and the P2P, commoner, maker, sharer, buen vivir, collaborative economic, social solidarity, direct action,  localisation  and co-operative movements and numerous others. All of these groupings themselves include many individual initiatives or what we are calling ‘tribes’. And many are being supported by enlightened local government initiatives like those of Bristol’s Mayor George Ferguson in his support for things like Bristol Pound – an exciting initiative that Transition Bristol have helped create and nurture.
Introducing the Real Economy LabFutures Forum: The Real Economy Lab
.
.
.
Posted by Jeremy Woodward at 15:22