The design review is integral to the planning process:


The National Planning Policy Framework  released in March 2012 clearly highlights the importance that good quality design has on the sustainibility of developments and communities. The NPPF states:
“ Local Planning authorities should have local design review arrangements in place to provide assessment and support to ensure high standards of design. They should also when appropriate refer major projects for a national design review. In general, early engagement on design produces the greatest benefits. In assessing applications, local planning authorities should have regards to the recommendations from the design review panel".
National Planning Policy Framework and Design Review | Integreat Plus

“The Design Review Panel provides an opportunity for developers and local authorities alike to have access to some of the best built environment practitioners in the region. Working together proactively and passionately we can raise the quality of urban living and conserve and enhance the places that make our County the best in the country.” - Andy Robbins - Development Manager, Exeter City Council

However, the whole process is open to question as being too 'top-heavy':

Can the proactive planning system envisaged by the Farrell Review really work? Paul McGrath listened in at the NLA’s half-day debate
The design review, an event that architects love and hate in equal measure, is on life support if Terry Farrell’s view of the future comes true.
Farrell was introducing a half-day conference on The Farrell Review’s suggestion of replacing design reviews with Place reviews. Place is an acronym for Planning, Landscape, Architecture, Conservation and Engineering, an acknowledgement that place-making is not always the preserve of an autocratic process. Why the change is necessary was discussed by a panel of specialists with occasional delegate participation.
Farrell’s vision is that quality in the built environment comes from pro-active, bottom-up planning. His review aims to “recast the agenda” from a reactionary planning system, where planners are seen as “the traffic wardens of the environment”, to one where the creation of place takes precedence.
The conference was hosted by New London Architecture and co-sponsored by the Design Network and the fledgling Place Alliance. The Design Network is a coalition of eight bodies each of which provides “design support” for those working with the built environment. Significant because under the National Planning Policy Framework (NPPF paragraph 62) all local planning authorities should have design review arrangements in place “…to ensure high standards of design”. 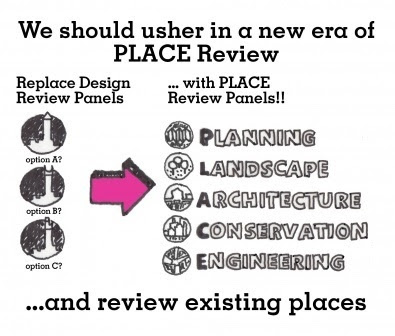 David Lamb from Design South East (part of the Design Network) stressed they were “not a typical architecture centre”. Presumably to distance themselves from a perception that architecture now is increasingly becoming a critique of set-piece buildings.
Along with English Heritage they all currently offer to conduct their own unique interpretation of what a “design review” is on behalf of developers, local authorities, community groups, etc. All except English Heritage charge a substantial fee for doing so. Farrell makes the point that transitioning to Place review, the focus becomes what can be done rather than what is proposed; whereas design reviews are merely an adjunct to a planning application. How they are funded was not mentioned.
The Bartlett’s Matthew Carmona described how the Place Alliance intends to step into the “post-austerity” void left by Cabe’s absorption into the Design Council. The Place Alliance (currently hosted by the Bartlett School of Planning) has been asked by The Farrell Review to take forward their recommendation of Place Leadership. The business of education, it would appear, is clearly eager to join the other not-for-profit organisations who see Place née design reviews as a money-generating opportunity. A point architects with an eye to business acumen should perhaps note.
The best practical example of Place review is the charrette. As John Thompson from the Academy of Urbanism pointed out, as part of modernising its planning system, Scotland has introduced a charrette mainstreaming programme under its sustainable communities initiative (SSCI). The idea being the design-led approach of the charrette should inform local planning strategies. By combining the knowledge base of local communities and the expertise of built environment professionals, the theory goes, the planning process becomes less polarised and a better, fairer environment is the outcome.
Richard Upton, who founded Cathedral Group, a developer with a social conscience, and Tony Newman, leader of Croydon council, both extolled the virtues of public/private partnerships, particularly with regard to land owned by the public sector. Upton, who has a long history of developing difficult sites in partnership with local authorities, was effusive about the need to change the culture of some property developers who often place little value on community consultation. As Cathedral has demonstrated, superior environments can result following meaningful engagement with the local community.
Consensus-building is not a phrase architects ordinarily use with regard to place-making. Hank Dittmar was the only person to counter the obvious weakness with the new agenda that collective decision-making, if not skilfully managed, could be just another form of design by committee. As a goal he said, consensus was necessary “not so that everyone agrees but to show we are moving in the right direction”. This is an objective shared with the Prince’s Foundation – for which he is an advisor. In response to a question regarding the perceived skills gap for facilitators, Noel Farrer, President of the Landscape Institute, pithily pointed out that Cabe was doing this years ago. Source: Agnese Sanvito
Terry Farrell and Ed Vaizey launch the Farrell Review consultation at the RIBA in 2013
The importance of cross-fertilisation of experience was cited by Deborah Lamb of English Heritage as one way to improve a dialogue between similar places. Coastal towns, for example, will share similar issues, she said. EH’s Urban Panel – made up of people with various skills who offer their expertise free of charge – visits cities across the country to listen and report on local opinions.
David Tittle from MADE, also part of the Design Network, and a trustee of Civic Voice, highlighted some of the problematic issues with design reviews. Citing his home city of Coventry and its redevelopment, he was scathing about how local people were “consulted” over a new shopping mall for its central area. Presenting a worked-up scheme for assessment and asking a few questions which had an either/or answer was not his idea of community engagement. Another problem highlighted was how members of the public access specialist expertise. Not everyone is aware of organisations such as Planning Aid (operated by the Royal Town Planning Institute) which provide plain English explanations of technical aspects of planning law to non-experts.
There were two stand-out questions from delegates. One related to the make-up of the speakers – 13 white men and one white woman – which, considering the message that “inclusive design” is the objective, was deemed unrepresentative of the multi-cultural and gender-balanced nature of the UK. The other concerned Neighbourhood Planning.
Unlike nebulous design reviews, Neighbourhood Planning has statutory support under the Localism Act. As a formal process, it is intended to provide local communities with the opportunity to influence the type of development in any particular area. Superficially, this has similarities with Place reviews which have no official status. Hank Dittmar pointed out there were also difficulties with Neighbourhood Planning. For example, there is a perception it may be regarded as a more detailed extension of the Local Plan. He also explained that out of 1,200 in progress, there was very little activity in the bottom 25% of areas of highest depravation and that Neighbourhood Planning should become more targeted.
It is perhaps fitting that Farrells, one of the UK’s leading architects, has primarily funded, researched and organised an independent review of how our cities are shaped. As any self-respecting architect knows, place-making is part of architecture’s DNA. The splintering of architecture (in its widest sense) in the second half of the 20th century into separate specialisations such as planning and urban design has left architects pondering their role now that collaboration and multi-disciplinary expertise is the norm. The Farrell Review has gone a long way towards clarifying what this could be.

Towards Place Review, A Farrell Review event, was held at the NLA on February 5
The design review is dead. Long live Place reviews | Review | Building Design
.
.
.
Posted by Jeremy Woodward at 12:00